Like other swing-district Democrats, Rep. Betsy Markey has a health care target on her back, and is working to defuse criticism before the November elections.

After voting against the House version of a health reform bill, Markey later decided to vote for the Senate bill that was amended and is now the law. The switch has Republicans hopeful they’ll reclaim the seat they held for years in the largely rural and conservative Colorado Fourth District.

Markey now has a tough fight against the likely GOP candidate, Colorado state Rep. Cory Gardner, who has already made her vote the centerpiece of his campaign. He pledged to repeal the law should he win. Markey is now trying to sell her decision, and the law, to constituents. She highlights provisions in the law such as tax credits for small businesses – she was a small business owner herself, having cofounded an Internet consulting and Web site development firm. She says the law will help spur growth, lower costs and drive down the federal deficit.

Since the beginning of the health debate, Markey says she’s spoken to 50,000 to 60,000 people about the legislation. During the spring congressional recess, she held telephone-only town hall meetings and has pledged to do more. She’s still getting “hundreds of calls” a week.

Yesterday, Markey spoke with KHN’s Andrew Villegas about her health care vote. Here are edited excerpts of the interview:

Q: What are you hearing from constituents on the health law?

A: Over the past week or so, we’ve had more people calling in to thank me for my vote than people opposing it, whereas it was probably flipped a month or so ago, so I think it’s turning around. Of course, in the district, I talked to medical groups, I talked to business owners, met with Rotary Clubs. I think for the most part, people don’t know what’s in the bill. There’s a lot of misinformation out there, so it’s been my job to answer people’s questions.

Q: Are there one or two specific things people are bringing up?

A: I hear a lot from small business owners who are concerned about the impact on their company. Most business owners that I talked with are really pleasantly surprised when they understand what’s in the bill. If you have under 50 employees there’s no mandate to provide your employees coverage and that’s 96 percent of businesses in the United States. But if you are under 25 employees, you get up to a 35 percent tax break this year for offering insurance. They already cover their employees to some extent, they’re struggling to do it and now they’re going to get a 35 percent tax cut for doing it.

Q: Are you hearing a lot of anger still?

A: I know there’s still a lot of people who are angry, they’re upset. Sometimes it’s a fear of the unknown. Particularly at a time like now when we are in a recession, I think that’s even more heightened, but it’s exactly also why we needed to do this bill. 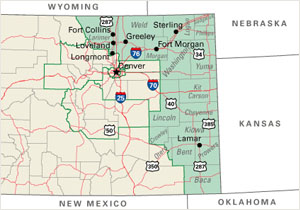 Q: Do you have a harder time selling the law to rural constituents than to those in Ft. Collins?

A: They are more skeptical, but honestly they have the most to gain.

We’re going to be doing a lot more outreach at senior centers as well. I think also seniors have questions on how Medicare is impacted. This is a really good bill for Medicare, it puts it on a more sustainable path without cutting any benefits. Seniors now are going to get a $250 rebate this year if they fall into the (prescription drug benefit) “doughnut hole,” and most seniors don’t realize that. Preventive care is now covered under Medicare without any kind of copay.

They don’t know what’s in the bill, so they’re a little scared (about cuts to Medicare). (There are) no cuts to benefits in this bill. The bundling of payments to hospitals, for instance, these are not things that affect the patient, but they really help to streamline the system without reducing benefits.

Q: Do you think that some of your constituents could end up being hurt by the law?

A: There’s always going to be unintended consequences in any legislation, so our job now is to make sure that we’re implementing this in a way that does meet our deficit reduction goals.

Q: Were there things in the Senate bill that you would have changed?

A: I was glad that all those special deals were eliminated, and I think we’re going to continue to tweak it. I do have some concerns about a large expansion of the Medicaid program. Initially I was very concerned that this was going to be an additional burden on the states at a time when none of our states have any money at all. So the federal government for the next couple of years is going to fund that increase, but then it’ll be back on the states again.

So I think we need to take a look at the Medicaid program to also make sure that it is sustainable through the long run and that we’re finding a way to save costs. We should look at things like potential copays (for Medicaid), which we don’t have right now. I think everyone should have some skin in the game.

Q: Have you heard anything from lawmakers that might be a significant change in the law?

My one concern is that we’ve done some things in the bill to make Medicare sustainable, in the long run, but we need to do that for Medicaid as well.

Q: Will you regret your vote if you lose in November?

Q: Did you speak with President Barack Obama before you decided to back the Senate bill?

A: Before I made a decision, I wanted to see the CBO analysis. I read it and then made my decision right after that. I did not speak with the president beforehand, there was no arm-twisting involved. I looked at the bill, it was a good bill, so I said I was going to vote for it. After I made my announcement to our local press, I was shocked – I got a call (from him) on my cell phone (thanking me).