Rep. Michael Burgess, a Republican physician from Texas, wants his party to aggressively attack the sweeping health care law, a signature policy achievement for President Barack Obama and Democrats. In January, Burgess begins his fifth term in the House where he founded a health care caucus to host forums and tell members and the press more about the health law. Like many in the GOP, Burgess says the measure gives the federal government too much power, and that it is “way too big, it’s way too costly, [and President Obama and Democrats] did it way too fast.” He wants it repealed and replaced with ideas Republicans favor to expand health coverage, including broadening the use of health savings accounts and allowing consumers to purchase health coverage across state lines. His observations of the national health care debate will be included in a soon-to-be-published book. KHN’s Mary Agnes Carey and Marilyn Werber Serafini recently spoke with Burgess. Edited excerpts of the interview follow.

A: We were elected on the promise that we would bring up a repeal vote very quickly. If I ran the show [the vote] would be the afternoon before the president does his State of the Union address. I understand that we didn’t win the Senate. I understand we didn’t win the White House. But I think it is important from the House perspective that we have that vote. I would even make it a call of the roll, just like the vote for speaker, [which is] going to be on swearing-in day. I would call everyone’s name and make them answer affirmatively yes or no if they support the repeal. People feel so strongly about this. [The health law] just violates what this country was founded on. This much bureaucratic change foisted on society is going to lead to chaos.

A: Part of the job right now is to make people aware that [the law is being implemented]. It’s not going to wait until 2014. There are new federal agencies being created every day under this law. What are these panels? Why does the [Health and Human Services] secretary have so much power? Where is the money coming from for these things? Our committee needs to do its job in oversight, to put some of these things out there in the public domain for public discussion and see what happens. We want to study every flaw in the bill. 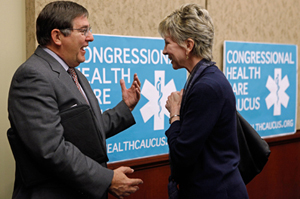 Q: Do you think you’ll get any Democratic support to repeal the individual mandate?

A: Maybe in the Senate. You’d be surprised. There are a lot of people over there who are trying to rehabilitate themselves before 2012. If the [individual mandate] goes then the whole house of cards comes down pretty quickly afterwards. Why do you think the [Medicare physician payment patch] was for 13 months? So we don’t have an opportunity to tag something like a repeal of the individual mandate to a must-pass doc fix in January or February.

Q: You’ve said this bill does nothing to control costs and may make health care more expensive for consumers. Can you give us an example?

A: Would [the law] hurt my ability to have a high deductible health plan if I choose to have that in the individual market? It could. Because in a high deductible health plan you want less money spent on actual medical care because that’s what helps keep the premiums down. If those companies have to come back and are forced to give rebates, they may find that this model is no longer economically viable and it goes away. And a segment of the population  myself included  will lose their consumer directed health care that they’ve come to rely on.

Q: What do you think of the AMA’s endorsement of the bill?

A: It was a mistake. The [Medicare physician payment] formula got no help in this bill. The number one problem doctors will tell you they have right now is the projected cuts in Medicare. [President Obama recently signed a measure to stop any Medicare payment cuts to physicians until January 2012, but cuts would take effect after that date without congressional action.] The AMA did not even get a downpayment on the fixing the formula. There was nothing. That coupled with not even a hint of interest in liability reform, no real discussion about some of the antitrust stuff that drive doctors crazy. How come insurance companies can get together and fix a price and hospitals can get together and fix a price but if doctors dare whisper the Federal Trade Commission comes in and it will cost you hundreds of thousands of dollars to defend yourself? I thought the AMA would have gotten some action on one of those three fronts and they didn’t.