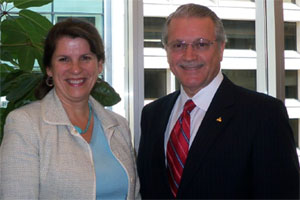 With spending on hospitals accounting for the largest chunk of the health care pie – about 31% – lawmakers are eying the industry for savings as they consider health care bills. So far, the industry has agreed to give up $155 billion in Medicare payments over the next decade, in a deal reached with the White House and Senate Finance Committee. Even with the cuts, hospitals expect to come out ahead overall because they’ll be providing less free care if more people are insured. However, the impact of any overhaul legislation is expected to vary greatly depending on the type and location of the hospital.  President Obama has proposed establishing an independent commission to have broad powers over Medicare spending.

President and CEO Anthony Tersigni says the true measure of reform is to cover all Americans with insurance, then tackle costs and improve quality. He and Ascension’s Chief Advocacy Officer Susan Nestor Levy, sat down with KHN correspondents Julie Appleby and Phil Galewitz. Here are edited excerpts:

Q: Are the bills in Congress meeting the goals you’ve outlined for health reform, which include 100% coverage, reforming insurance rules and making health insurance affordable?

A: (Tersigni) I’m ecstatic that (Congress) is even talking about this. It seems that each of our principles are embedded somewhere in one of the bills. We want to continue to make sure our voice is heard so that no matter what comes out, it includes all of those principles. We’re excited that health care reform is the closest its been in last 60, 70 years. We want to make sure we keep the agenda on the right focus: Caring for all in this country. We don’t believe what we’re talking about is transforming health care. What we’re talking about is reforming. If we can get reform that will be the catalyst for transformation.

Q: How did you feel about the $155 billion in Medicare payments the hospital industry agreed to give up for health reform?

A: (Tersigni) When we set out our principles, we knew everyone needed to feel the pain or it wasn’t going to work. We supported the American Hospital Association when it put that number out there. It’s the right approach for all of us in the health care sector to be saying we need to do things differently. We need to reinvent ourselves. It means putting our John Hancock on the line for something we probably don’t have the answer for right now.

If you were to ask how to take $155 billion out of the system, I’m not sure anyone has the actual correct answer at this point. It’s the target. If you don’t put the target out there and get everyone supporting that effort, it’s not going to work. That’s what excites me about health care reform. Finally we have everyone pushing for health reform. We have industry, labor, government, business all saying now is the time for us to do something. Shame on us as a society if we miss this opportunity. We will lose it for a generation if we lose it this time.

Q: How do hospitals stand to gain from the proposed requirement that all Americans have insurance?

A: (Tersigni) We don’t know the answer. We haven’t seen the specifics of what that means. We’re concerned with making sure people have insurance rather than the dollar amount. We’re taking care of these people anyway. We feel focused on let’s get everyone 100% access, 100% covered. Then worry about how to make that work.

Q: What do you think about the proposal for a public plan option?

Whether it pays Medicare rates is another question. Today we have maybe 40% of our revenue from Medicare. As soon as the Baby Boom hits 2011, our Medicare revenues will go to 60%. We have 10% Medicaid today. If any of the the bills pass they will really expand Medicaid, so it will be 20%. Then we’ll have 80% of revenues coming into most hospitals that are going to be rate-set anyway. (Aside from the arguments over a public plan) we are creating a system in our country – because of demographics – (where much of hospital care) will be rate-set.

Q: What about the idea of an independent commission with power over Medicare spending?

A: (Levy) We understand why people are nervous about that. We need some sort of independent commission, if you could make it truly independent, that would set health goals and coverage goals and quality goals. Cost could be in it as a backup trigger: If we don’t achieve what we want, we could use the commission over time. But it would have to be in all sectors, insurers and doctors and hospitals, not just one sector.

Q: Do you see anything in these bills that would bring down premium prices?

A: (Levy) If can you can get insurance pools to work so everyone is covered, you do have a chance of stabilizing at least. (And change rules on how much insurers can charge based on health status.) Current state law in Indiana, for example, where we have a lot of hospitals, insurers can charge 14 times as much for someone who is sick as someone who is healthy. If you change those laws, you will begin to suppress the variation in insurance prices. The other real potential for saving money we see an uninsured patient once every 34 seconds. Once we’re not spending all our time on that, I really believe there is this incredible potential for a more efficient system.

Q: What are the chances of health reform passing?

A: (Tersigni) I’m very optimistic. It may not be as far-reaching as we anticipate this first time, but I believe we will find a solution to at least get the ball rolling. By the end of this calendar year, we will have some legislation that will be passed that will be a catalyst for us to move into the future in a much more positive way.

Q: Will it be a plan that covers 95% of the population?

A: (Tersigni) I would caution not to put it in that term. I would rather say we will have something that will get us further down this journey. That would be win for the United States. That’s what we really should focus our energy on as opposed to getting an exact number and exact time. We fall into trap as a country in doing that.

(Levy) I think people are suffering from reform fatigue already and are forgetting how world-changing it would be to have rating reform and no pre-existing condition exclusions in the individual insurance market. That would change our world as we know it.

Q. That may help individuals certainly, but with so many more people in the system, where do you slow down the costs?

A: (Levy) It’s a great platform to move on costs. That’s what they have done in Massachusetts. We’ve always said we can’t wait until we get costs under control. From a human dignity standpoint, we have to get everyone insured.

Q: There’s been discussion about a proposal in one of the bills that would allow Medicare to pay doctors to talk with patients about end of life issues, if patients want to talk. That’s caused concern in some areas. How does your hospital system deal with that now?

A: (Tersigni) We continuously try to educate the communities we serve on advance directives, so it eliminates that issue for families, for physicians and for us as providers. Are we getting better at that as a country? I think we are. Are we where we need to be? I don’t think so. To answer your question in a different way, we need to re-examine the role patients have played and should play in the future in terms of decision-making. Everything we do, including our electronic medical records, is to enable the patient to be part of the decision-making team.