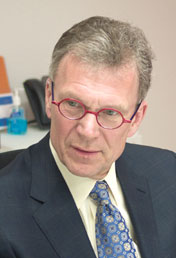 Tom Daschle, the former Senate Majority Leader and a senior, informal, advisor to President Obama during the health debate has been writing and talking about how the law got passed. In his new book, “Getting It Done,” Daschle talks about the challenges facing the administration now, including walking the line between the “pragmatic and idealistic” and about how to respond to the many requests for waivers from complying with the law. He sat down with Jackie Judd recently and here are edited excerpts of that interview:

Jackie Judd: The title might well have been very different, had a few events been different. Anybody who followed the day-to-day coverage of this knew how close a battle it was. You had this great insider perspective. Was there a point where you thought the Democrats might have had to fold the tent?

Sen. Tom Daschle: Jackie, there were three or four times throughout that process that I would call near-death experiences ? where we really thought that it would take a real effort to resuscitate the effort and to find some way to get us to the next step. That happened as late as a couple of days before Christmas last year. So, yes, there were some times we were biting our nails and crossing our fingers and doing everything we could to make sure we got the job done.

What was the lowest of the low points? Was it after Scott Brown was elected (Republican elected as senator from Massachusetts, filling Ted Kennedy’s seat)?

I think that was one of the low points. Right after the August recess with all the negative town hall meetings was another. There was a time when it really did look like we couldn’t reach consensus between the House and the Senate. The Scott Brown election, that was really one of the low points as well, in terms of prospects for getting the legislation passed. So several times, it looked pretty precarious. 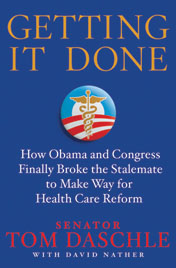 Well I really think that was one of the most pivotal new developments in this whole effort to pass meaningful health reform. The stakeholders historically have been in opposition to changing the status quo, in large measure because they thought they had more to lose by change than by keeping the status quo. This is a time when I think they all came to the same conclusion: that we can’t possibly sustain the status quo; things are going to have to change.

Whether it was doctors, hospitals, pharmaceutical companies, even insurance companies, came to the realization that we’re on a path that’s just unsustainable today. And so that realization, along with the belief that if they started early, working with the White House, they could limit some of the more negative aspects of what they saw to be the impact of what health reform could have on their industry as they move forward.

We’ve seen some of the difficulties of implementation already. The Department of Health and Human Services recently granted waivers to about 30 companies, insurers, unions, because some of them said “if we had to meet these immediate minimum requirements, we might not be able to offer our employees continued health care.” So (the administration) made concessions. Does that worry you? Is it some unraveling of what Congress and the president had intended to do?

Well, I tell people all the time, that I think there are three Ps that we have to be cognizant of: preparation for the ten years of implementation that go forward, partnership-it’s really important to be partners with Congress, with the states, and with the stakeholders, and pragmatism. We’ve got to be pragmatic. And I think that the Department of Health and Human Services and the White House today are demonstrating that pragmatism.

Are we doing everything that I wish we could? Probably not. But are we doing enough to put us in a position to keep building and extending and expanding as we go forward? Absolutely.

It doesn’t worry you at all about what may lie ahead, because certainly it seems that if these 30 first-in received waivers, there will be other people knocking at the door, there are about a hundred other waiver requests in the pipeline.

Well, I think you have to take each one on its own. I would be concerned if every waiver that came along was accepted, but I don’t think that’s going to be the case. I think what the White House and those in charge of implementation are doing is trying to find that balance between the perfect and the good, between the pragmatic and the idealistic. And I think they’re trying to work through each one of these stages one step at a time, and I give them high marks for what they’ve done so far.

Do you know yet, could you say where you would draw the line?

Well, I would say so far I think they’ve drawn the line reasonably closely to where I would come down. I think it’s pretty hard to second guess each one of these decisions without knowing all the facts, without fully appreciating just what went into that particular decision. But I will say, Jackie, I think what’s really important, is to keep this process moving forward with some expectation that we’re going to come back, revisit a lot of these questions as time goes on, and continue to build and improve upon what we’ve done and decided so far.

You have to expect pushback. We’ve seen virtually every piece of major social legislation to come along … Alf Landon, in 1936, campaigned for president on the promise that he would repeal Social Security. That rings very relevant today with all the promises you hear, from some running for public office, about health care reform.

I think, though, that in the give-and-take of politics and public policy making, it’s important to ask: What’s the alternative? What do we do if we don’t do this? And can we come up with a better way? No one claims to have the right answer, or the right solution, right down the line. In each one of the questions involving public policy and health today, in this legislation, and this act.

At the end of the day, the question is: How do we find ways to improve it? Not repeal it. We know the status quo is unacceptable. We know that we can’t do what we were doing for the last 20 years without serious repercussions regarding cost access and quality. We’ve got to find ways to make this better. I think this legislation is a good framework to do so.

Of all the pushback we’re seeing at this moment, what worries you most? The Florida lawsuit? The Virginia case? The ballot initiatives? What keeps you up at night?

Well, there are three major threats. There’s the legal threat. I’m not too concerned about that. We’ve already seen one decision in Michigan. I’m very hopeful that as we go through the courts and the legal process that we’re going to continue to be sustained and I have reasonable confidence that we will be. I’m not too worried about repeal efforts, because I don’t think those will go anywhere.

I do think defunding is a very serious threat and we have to be concerned about that. And I’m concerned about implementation. We’re electing 37 governors in this cycle. Those governors are going to have a lot to say with regard to the enthusiasm and the success of implementation. Because so much of what happens is going to happen at the state level. Now, we have a fallback position where the federal government can step in if the states don’t do what the law requires. So that fallback gives me some confidence that we’re going to have continuity with implementation.