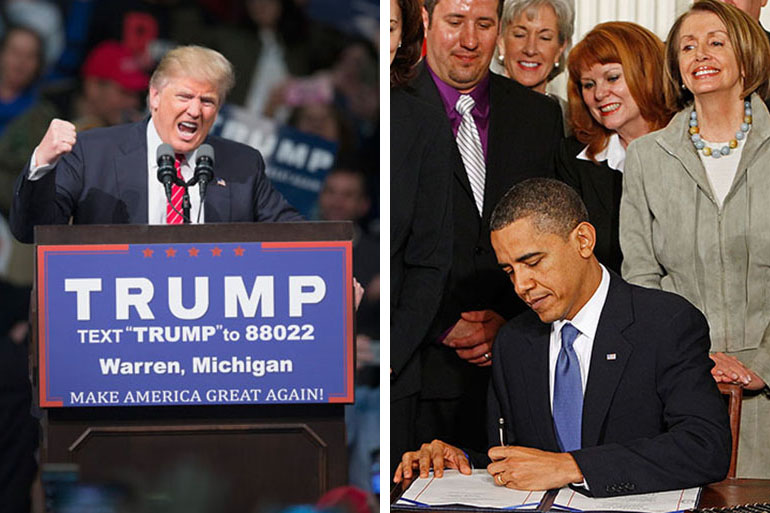 Republicans will likely chip away at the ACA piecemeal and say they will try to provide a soft exit.

Republican efforts to get rid of the federal health law are expected to take some time to work through Congress and leaders have promised to give consumers time to adjust to those changes.

A plan to test the effectiveness of so-called “Frankenflies” is being closely watched by nearby Miami-Dade County as a possible way to combat the spread of Zika.

Republicans want to jettison the health law, but some features are already hardwired into the system.

But block grants face likely resistance from states, poised to lose many millions.

The number of states with laws permitting marijuana use underscores a national cultural shift toward wider acceptance of the drug, despite the federal ban and limited evidence on the public health impacts of legalization.

Trump, GOP In Congress Could Use “Must-Pass” Bills To Bring Health Changes

Some “must-pass” health legislation next year could give the new administration a vehicle for some proposals that might not be able to clear political or procedural hurdles on their own.

Uninsured Californians could more than double to 7.5 million if Affordable Care Act is repealed.

Colorado’s approval of a ballot measure sets the stage for efforts in other states.

Voters across the country also considered a variety of health policy questions as they decided state ballot measures.

Why an obscure revenue raiser for the Affordable Care Act has found its way into a number of congressional campaign ads.

Michael Weinstein of the AIDS Healthcare Foundation says he is promoting condoms where others have forgotten them.

Why Tobacco Companies Are Spending Millions To Boost A Cigarette Tax

R.J. Reynolds has put $12 million into an effort to raise tobacco taxes in Missouri. But the proposed 60-cents per pack tax, still among the lowest in the nation, is not likely to make many smokers quit.

Majorities of Democrats, Republicans and independents support making sure high-cost drugs for chronic conditions are affordable.

WikiLeaks documents show a cautious speaker who tried to avoid compromises on policy.

Concerned About Losing Your Marketplace Plan?

Republican efforts to get rid of the federal health law are expected to take some time to work through Congress and leaders have promised to give consumers time to adjust to those changes.

In this first of a series of videos about health care promises from presidential candidates that “sound like a good idea,” Julie Rovner explores why increasing competition in health insurance by allowing sales of policies across state lines might not be such a good idea after all.

This second video in the series explores why proposals to regulate drug prices may not be such a good idea after all.

This third video in the series explores why a Republican suggestion to establish a new federal high-risk insurance pool may not be such a good idea after all.

No Immediate Changes To Your Obamacare Coverage

Covered California’s Future In Peril If Federal Subsidies Dry Up

By Anna Gorman and Ana B. Ibarra | November 9

Get More From California Healthline