Pioneer Press: Striking Nurses Union Wants Meeting With Allina Board
The striking Minnesota Nurses Association sent a letter to Allina Health’s board of directors Wednesday, requesting to meet and discuss the nurses’ concerns. Thousands of MNA nurses were on the third day of an open-ended strike at five Twin Cities-area Allina facilities, including United Hospital in St. Paul. The gist of the letter is that union officials say Allina executives may have misinformed the board regarding how the negotiations have been handled. (Cooney, 9/7)

Dallas Morning News: Texas Nursing Home Residents Getting Worse Care, And Industry Says Paltry State Spending Is Why
Texas nursing homes, plagued by poor pay and wholesale staff turnover, are admitting that care is getting worse and danger of injury is rising for residents of their institutions. A new study shows that health-standard violations in Texas homes increased by 20 percent from 2010 to 2014. (Rice, 9/7)

The New York Times: New York Can’t Block Late-Term Abortion In Certain Cases, Schneiderman Says
Attorney General Eric T. Schneiderman on Wednesday took a large step toward making New York one of several states to allow late-term abortions in cases where the mother’s health is in jeopardy or the fetus suffers a fatal complication, relying on Supreme Court rulings he said overrode existing law. In a new legal opinion, Mr. Schneiderman said the 1970 state law, which criminalizes abortion past 24 weeks of pregnancy unless the mother’s life is endangered, did not square with the later Supreme Court decisions in Roe v. Wade and other cases. (Yee, 9/7)

The Associated Press: Report Says More Funding Needed To Cut Into Rape Kit Backlog
Pennsylvania government auditors said Wednesday new funding is needed to cut into the state's backlog of untested rape kits, and they suggested penalties against police agencies that do not meet testing and reporting standards imposed by a law enacted last year. The auditor general's office released a report that followed the state Health Department's disclosure in May that there were more than 1,850 rape kits in Pennsylvania that had gone more than a year without being tested. There were more than 3,000 untested kits in all. (9/7)

The New York Times: Lawmakers Skeptical Of State’s Explanation For Hoosick Falls Water Crisis
For the second time in two weeks, New York State Department of Health officials sought to blame the Environmental Protection Agency for a contaminated water crisis in upstate New York, saying on Wednesday that they were confused and hamstrung by changing federal standards on perfluorooctanoic acid, a toxic chemical known as PFOA. But again and again, lawmakers at a joint legislative hearing seemed deeply skeptical of the state’s explanations about what happened in Hoosick Falls, a riverside hamlet where PFOA has been found in dangerously high levels. (McKinley, 9/7)

USA Today: Child Neglect Claimed In Jerika's Hospice Battle
Child protection authorities were first asked to investigate an Appleton teenager’s decision to die more than a month ago, according to referrals obtained by USA TODAY NETWORK-Wisconsin. The disability rights groups that filed the referrals hoping to halt 14-year-old Jerika Bolen’s plans to enter hospice care and cease treatment of her incurable disease say they still have not received word from state or county officials on whether any action is being pursued. (Collar, 9/7)

Nashville Tennessean: Want To Save On A Medical Procedure? There's An App For That
It's the classically American health care structure of "service first, learn the cost later" that Paul Ketchel's MDsave is trying to fix. MDsave sits at the nexus of a growing health care conundrum: People need the care when they need it, but that pricey medical test doesn't always align with how close they are to meeting the deductible — if they have health insurance at all. Nor do they know what the total cost before heading into the lab or operating room. (Fletcher, 9/7)

Stateline: Citing Health Concerns, Some Cities Consider Dimmer LED Streetlights
In the last several years, New York, Los Angeles, Houston, Seattle and other U.S. cities have installed high-intensity, white LED streetlights. In all, at least 13 percent of outdoor lighting is now LED, and many communities that haven’t yet made the switch are rushing to do so. ... But health concerns, heightened by a recent warning by the American Medical Association (AMA), are giving pause to some local officials, spurring them to consider less-intense LED alternatives. (Ollove, 9/7)

Minnesota Public Radio: Suicide Deaths Increase 6 Percent In Minnesota; Men Driving Uptick
The number of suicide deaths increased 6 percent in Minnesota last year, with suicides among men driving most of the increase. The state counted 726 suicides in 2015 — 40 more than the previous year. Suicides among white males ages 25 to 34 account for half of the increase, the Minnesota Department of Health said. (Benson, 9/7) 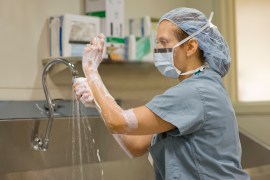 Could Trump’s Push To Undo The ACA Cause Problems For COVID Survivors? Biden Thinks So.

Shingles Vaccination Rate Soars But Leaves Many Behind

Behind The Byline: ‘Everybody Hit Record’