Tooth decay is the most common chronic health problem in children. By the time they enter kindergarten, more than a quarter of kids have decay in their baby teeth. The problem worsens with age, and nearly 68 percent of people age 16 to 19 have decay in their permanent teeth, according to the Centers for Disease Control and Prevention. 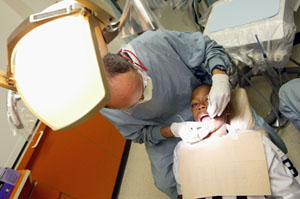 Starting in 2014, the Affordable Care Act requires that individual and small-group health plans sold both on the state-based health insurance exchanges and outside them on the private market cover pediatric dental services. However, plans that have grandfathered status under the law are not required to offer this coverage.

The requirement also doesn’t apply to health plans offered by large companies, although they are much more likely to offer dental benefits than small firms. Eighty-nine percent of firms with 200 or more workers offered dental benefits in 2012, compared with 53 percent of smaller firms, according to the Kaiser Family Foundation’s annual survey of employer health plans. (Kaiser Health News is an independent project of KFF.).

The changes in the health law apply specifically to children who get coverage through private plans. Dental services are already part of the benefit package for children covered by Medicaid, the state-federal health program for low-income people. But many eligible kids aren’t enrolled, and even if they are, their parents often run into hurdles finding dentists who speak their language and are willing to accept Medicaid payments.

The health law encourages states to expand Medicaid coverage for adults, which advocates say will have the added benefit of probably bringing more children into the system. Despite the challenges, advocates say they anticipate that many low-income children will gain dental coverage.

Dental health advocates say they’re pleased that pediatric dental services (along with other pediatric care) were included among the 10 “essential health benefits” that new health plans must cover in the exchanges and the small-group and individual markets under the law.

Still, some advocates are concerned that the new benefits may not be sufficiently comprehensive or affordable.

Specific coverage requirements will be determined by each state within guidelines set by the federal Department of Health and Human Services. HHS guidance to date suggests that medically necessary orthodontia — to correct a problem with chewing, for example — may be required in addition to preventive and restorative care. Dental coverage may be embedded in a medical plan that’s sold on the exchanges or offered on a stand-alone basis.

In private dental plans, preventive care such as teeth cleanings, topical fluoride and sealants are typically covered at 100 percent, but such other services as fillings, crowns and root canals require patients to pay up to half the cost, and coverage maxes out at about $1,500 a year.

Under the health-care law, pediatric dental health coverage sold on the exchanges cannot have annual or lifetime limits on coverage.

But families who buy dental coverage on an exchange may be subject to an annual out-of-pocket cost-sharing limit of up to $1,000 for dental care. A rule proposed by HHS suggests there be a “reasonable” annual limit. The National Association of Dental Plans has proposed $1,000. Experts expect that the final rule, when issued, will clarify the amount.

“That would be on top of whatever out-of-pocket limit people are already facing [for medical coverage],” says Colin Reusch, senior policy analyst at the Children’s Dental Health Project, who co-authored a recent report on the health law’s pediatric dental benefit. “We see that as being in conflict with what the law intends.”

Evelyn Ireland, executive director of the National Association of Dental Plans, says families who need expensive dental care such as braces may fare better in dental plans sold on the exchanges than in the plans many employers currently offer.

Nationwide, medically necessary orthodontia costs roughly $6,500 per person, Ireland says. Currently, if a private dental plan covers orthodontia, the benefit typically covers 50 percent of the cost, up to a lifetime limit of $1,000 or $1,500. “So it ends up basically being a down payment,” she says.

Assuming braces are a covered benefit, the family of a child with dental coverage through an exchange might have to pay the maximum out-of-pocket limit — $1,000, perhaps — and owe nothing more that year for the child’s dental care. But any other expenses would be covered, since plans can’t have dollar limits on coverage.

That unlimited coverage will probably add to the premium for pediatric dental coverage, however.

Ireland’s group asked the benefits consultant firm Milliman to estimate how much pediatric dental premiums might change if the coverage provisions of the law were incorporated.

Milliman estimated that premiums currently range from $21 to $25 per child per month, depending on whether a plan covers orthodontia services, among other things. After incorporating the health law’s requirements, Milliman projected that premiums would probably rise to $34 a month, Ireland says.

“That’s a nine-dollar-to-13-dollar-a-month jump, which is a pretty significant increase for a family,” she says.