Anyone who sues for personal injury probably knows that the process may take time. But for Medicare beneficiaries, too often it’s not only the legal system that grinds slowly. Lawyers and policy experts say bureaucratic inefficiency at the federal Centers for Medicare & Medicaid Services (CMS) can add months or even years to the process. During that period, a beneficiary often must wait until Medicare is reimbursed for its costs before he or she can receive any payment. 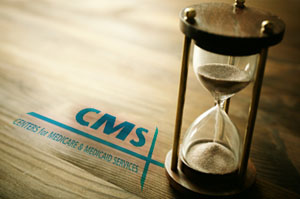 A new law that, among other things, spells out clear schedules for providing details about medical claims is expected to reduce those delays.

The problem generally arises when a Medicare beneficiary believes he or she was harmed because of another party’s negligence: getting hit by a car while crossing the street, for example, or suffering lasting injury because of a careless surgical error.

The Medicare beneficiary typically hires a lawyer, who contacts the legal representative for the other side. Often the parties try to reach a financial settlement rather than go to court.

In such cases, Medicare has generally paid the injured person’s medical bills. But if there’s a settlement or a judgment in the victim’s favor, the other party’s liability insurer typically becomes what’s known as the “primary payer” – i.e., the party responsible for the medical bills. Medicare becomes the “secondary payer” and is then entitled to reimbursement for the money it has already spent on the victim’s medical care.

That’s where it gets sticky. To settle a case, lawyers generally want to know the amount of the medical bills that have been incurred. An $80,000 settlement doesn’t make sense if Medicare is owed $60,000 for bills it has already paid. After the plaintiff’s attorney takes his fee, usually one-third of the settlement amount, there would be nothing left to compensate the victim for pain and suffering, inability to work, etc.

“At a mediation, if you don’t have solid numbers it’s impossible to settle a case,” says Mary Alice McLarty, a plaintiff’s lawyer who is president of the American Association for Justice, a trial lawyers’ group.

CMS frequently doesn’t make details available about the expenses it has incurred for several months after litigants inform the agency that a case is pending, defense and plaintiff’s attorneys say. Without that information, the case stalls and Medicare beneficiaries are left in limbo.

In one case involving an 80-year-old man who was injured in a car accident in Kentucky in November 2011, it took more than a year to get a final figure from CMS detailing how much the agency was owed, says Linda Magruder, an attorney in Louisville who was the victim’s co-counsel in the case. That amount, for treatment for soft-tissue injuries to the man’s right hip, left foot, back and neck, was $2,640. But the agency first claimed it was owed more than $26,000, she says, because it included bills for care not related to the accident.

Until the discrepancies were addressed, the man was unable to receive his share – roughly $30,000 – of the $50,000 insurance settlement.

“All this stuff is computerized,” she says. “Why should it take so long to put it together?”

The slow reporting process isn’t only a problem for individual beneficiaries, experts say. These inefficiencies mean that the Medicare Trust Fund doesn’t get repaid promptly for care, either.

In 2011, more than 480,000 new cases were recorded, and CMS realized more than $860 million in payments and savings related to such cases, according to a Government Accountability Office report.

“The reforms to [the] process are improvements that shore up Medicare’s long-term finances and save the taxpayers money,” said Rep. Tim Murphy (R-Pa.), one of the new law’s co-sponsors, in a statement.

CMS officials offer a different perspective on how the process works. Deborah Taylor, director of the agency’s Office of Financial Management, said in a statement that once a case is established under the current system, it generally takes 45 days to make Medicare’s reimbursement amount available to beneficiaries and their representatives. Updates for newly processed claims are available within 48 hours, she said.

“CMS’s goal is a Medicare secondary payer program that operates at the highest level of customer service,” she said. “We have made numerous improvements that not only improve efficiency in the program but also protect the interests of beneficiaries and the Medicare Trust Fund.”

The new law, the Strengthening Medicare and Repaying Taxpayers (SMART) Act, signed by President Obama this month, sets time frames for CMS and Medicare beneficiaries to provide information in cases where a settlement is expected.

Under the law, a beneficiary must notify CMS if he is expecting a settlement within 120 days. CMS then has 65 days to tell the parties how much it believes it is owed. The agency can request an additional 30 days if necessary.

If beneficiaries believe the amount posted is wrong, they can provide documentation to CMS, and the agency has 11 days to respond. The law also limits to three years the time CMS has to pursue reimbursement.

The law doesn’t address all the problems with the current process, says Bill Kennedy, a lawyer in Philadelphia who defends health-care providers and insurers in liability matters.

Still, he says, “by creating some certainty and a means by which people can find out the number [that CMS is owed], Medicare is stronger and the consumer is stronger.”

Long Waits For Consumers When Medicare Is ‘Secondary Payer’

Analysis: Who Profits From Steep Medical Bills? The People Tasked With Fixing Them.