There’s a growing recognition by clinicians that some patients who arrive at the emergency department can benefit if they’re kept under observation for up to a day so that staff can run more tests and monitor their progress to see if their condition is improving or deteriorating. 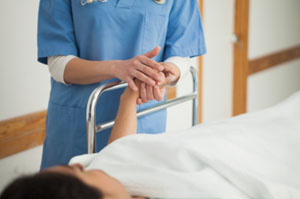 Unfortunately, many hospitals and insurers haven’t set up their clinical and billing systems or insurance contracts with these patients’ needs in mind. Not only does this result in a longer stay in some cases, but it also can cause confusion for patients and bigger patient bills. Many experts say that the problem is likely to get worse.

More than a third of hospitals report having an observation unit today, double the 19 percent that reported having one in 2003.

Experts say that the most effective observation units have a dedicated staff that follows clearly defined protocols. Rather than send a patient home who is at high risk for a heart attack following an emergency department visit because of chest pain, for example, staff might refer him to an observation unit for repeat blood tests, EKGs and a stress test. A patient with severe asthma who needs time and medication to get an attack under control might be sent to the observation unit for several hours.

By monitoring and treating patients intensively upfront, observation unit staff can forestall problems and help people get better faster. Patients typically stay less than a day, though some may remain longer.

“These are patients who fall between the cracks,” says Michael Ross, an emergency physician who is director of observational medicine at Emory University School of Medicine in Atlanta. “They need more than an emergency department visit, but if managed practically they often need less than 24 hours of care.”

Shorter hospital stays can result in lower hospital costs. A study that Ross co-authored on emergency department patients who had had a transient ischemic attack — a temporary interruption of blood flow to the brain that causes stroke-like symptoms and is sometimes a harbinger of a true stroke — showed that those who were referred to an observation unit were discharged nearly 38 hours sooner than those who were admitted as inpatients. Observation unit patients also cost the hospital less: The median amount was $2,092 versus $4,922.

But hospital savings don’t necessarily translate into lower costs for patients. Insurers treat care provided in an observation unit as outpatient care. That often means patients pay a la carte for every X-ray, blood test or scan. In contrast, if patients are admitted as inpatients, they may owe only a single co-payment, after which all or nearly all services are covered. And for Medicare patients, being assigned to observation care rather than inpatient care can bring higher drug bills and affect coverage of subsequent nursing home care.

Part of the problem is that many hospitals that place patients on observation status don’t necessarily have a designated unit where such patients are treated. Instead, they may place emergency department patients on observation status and put them in a bed on one of the regular inpatient hospital floors. Such patients frequently don’t receive the care based on clearly defined protocols shown to be successful in designated observation units, experts say. Adding to the confusion, the patient may think he’s been admitted and not realize he’s going to be billed for outpatient rather than inpatient care.

“It’s a terribly inefficient way to provide observation services,” Christopher Baugh, medical director of the emergency department observation unit at Brigham and Women’s Hospital in Boston, says of care that isn’t provided in a separate unit. “It’s also difficult to communicate [the difference] to patients who are in an inpatient area and sharing a room with an inpatient and spending sometimes a long time there.”

But the arrangement can be attractive to hospitals. Placing patients on observation status and putting them in a bed somewhere in the hospital reduces crowding in the emergency department. It may also reduce the number of admissions. The Centers for Medicare & Medicaid Services and private insurers are monitoring hospital admissions closely and have been retroactively denying payment if they determine an admission wasn’t warranted.

The health law could prompt hospitals to use the observation designation with more patients, even if they don’t receive special care, say experts.

Observation Units Can Improve Care But May Be Costly For Patients