Historically, one of the perks of working at a big company has been generous health benefits with modest out-of-pocket costs. But increasingly, large companies are offering their employees only one option: a plan with a relatively high deductible linked to a savings account for medical expenses.

According to the annual health benefits survey by Towers Watson and the National Business Group on Health, 66 percent of companies with 1,000 employees or more offered at least one such plan this year. This figure is expected to grow to nearly 80 percent next year, according to the survey. At nearly 15 percent of companies surveyed, an account-based plan was the only option — an increase from 7.6 percent in 2010.

“I do think a lot more large companies are getting comfortable” with the idea of shifting from a traditional plan to one with a higher deductible and a savings account, says Alexander Domaszewicz, health care consumerism practice leader for benefits consultant Mercer.

Workers at smaller companies are even more likely to have coverage through a high-deductible health plan with a savings account, according to the Kaiser Family Foundation’s annual employer health benefits survey. Nearly a quarter of workers at companies with fewer than 200 workers were covered by such plans last year, compared with 17 percent of workers at larger firms.

Switching to this type of plan may be relatively simple for smaller firms, since their deductibles in traditional plans are typically higher than those of larger employers, says Gary Claxton, vice president at The Kaiser Family Foundation. (KHN is an editorially independent program of the foundation.)

Matt Grove and his wife, Annie, own a bagel business in Upstate New York. They stopped offering a traditional health plan to their 14 full-time employees last year, leaving in place only a plan with a $5,000 deductible and a health savings account. The change reduced the premiums significantly, enabling the company to trim the amount employees paid for coverage from $173 a month to $43. The Groves deposit about $200 annually into each worker’s HSA account to help cover their medical expenses.

The Groves have family coverage through the same plan. Even though Annie has a heart condition and the Groves have to pay for her regular echocardiogram and MRI tests out of pocket up to the $5,000 deductible, Matt Grove says it’s still cheaper than the $12,000 premium they paid annually for traditional coverage. 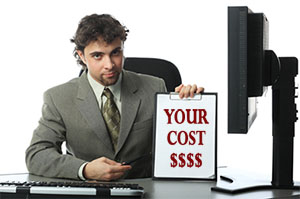 “We paid for all of that out of pocket, and we still saved money [last year],” he says. “It was crazy. The other insurance was just so expensive.”

The health-care overhaul has spurred interest in these types of plans, says Domaszewicz. Starting in 2014, most employers have to offer health insurance that is considered affordable (individual premiums that are no more than 9.5 percent of income) and adequate (a plan that covers at least 60 percent of allowed medical expenses) or face a penalty.

“Imagine a retailer or a restaurant,” Domaszewicz says. “They may want to offer a very basic plan as a protection that provides the least value that’s allowable” without triggering a penalty for inadequate coverage.

“The company says, ‘Maybe we’ll make that an HSA plan.'”

Under federal law, the Internal Revenue Service sets the standards for these plans. In 2013, a health plan with a linked health savings account must have a deductible of at least $1,250 for individual coverage and $2,500 for family coverage; among other requirements, the maximum out-of-pocket expense will be $6,250 for an individual and $12,500 for a family.

The money put into the savings accounts is also limited, but both workers and employers can contribute. The money is tax-free as long as it’s used for medical expenses, and it belongs to the worker even if he leaves his job.

About two-thirds of employers that offer health plans with savings accounts put money into those accounts for their workers, according to the KFF survey.

According to the Towers Watson survey, much of the growth in account-based coverage has been in HSA plans, eclipsing an older type of savings account called a health reimbursement arrangement, which can be funded only with employer money and belongs to the employer if the worker leaves the job.

In addition to saving companies money, shifting to health plans with higher deductibles and savings accounts is supposed to help workers become more cost-conscious in choosing health care. But the extent to which this is occurring is unclear.

An analysis by the Robert Wood Johnson Foundation that synthesized research findings on consumer-driven health plans (another term applied to plans with relatively high deductibles and a consumer spending account) found that, on average, they reduced total health-care spending by 5 to 14 percent.

The reductions were concentrated among healthier enrollees and were mainly due to lower spending on prescription drugs and outpatient care. Results were mixed on whether people in such plans cut back indiscriminately on both necessary and unnecessary care, as earlier research has found.

As employers try to nudge employees toward healthier behaviors, they’re increasingly tying their contributions to employee health expense accounts to healthy behavior. They may require employees with chronic conditions to participate in health coaching, for example, or to keep their blood pressure and weight within recommended levels, says Sandy Ageloff, a senior consultant at Towers Watson.

At the same time, because account-based plans often expose workers to higher out-of-pocket spending, experts say the onus is on employers to give employees information they need to compare cost and quality and make good health care choices.

“Educational materials are definitely an issue with these plans,” says M. Kate Bundorf, an associate professor of health research and policy at Stanford University who authored the RWJF analysis. For example, “Price information has been very opaque, and plans are developing tools to deal with it.”