Breast cancer or the threat of it is a reality in too many women’s lives, including that of the actress Angelina Jolie as we learned earlier this month. As women mull their options for genetic testing, screening and treatment for the disease, one factor that can loom large is the extent to which their health insurance will cover whatever choices they make.

Most coverage is pretty good, experts agree, and it’s getting better under the Affordable Care Act. Still, there are weak spots, and some plans are woefully inadequate. In those instances, a woman may face high out-of-pocket costs or have to appeal plan denials to get the coverage she needs.

Jolie announced that she underwent genetic testing and, after learning she has a genetic mutation that significantly increases her risk of breast and ovarian cancers, had a double mastectomy. Her mother died of ovarian cancer at age 56.

If a woman has a family history of breast or ovarian cancer, many health plans cover genetic counseling and testing to identify mutations in the BRCA1 and BRCA2 genes that are known to increase risk of disease. Inherited BRCA1 and BRCA2 mutations account for an estimated 5 to 10 percent of breast cancers and up to 15 percent of ovarian cancers, according to the National Cancer Institute.

The test costs roughly $3,000. Genetic counseling is less expensive but can still cost hundreds of dollars, experts say. Although testing may be a covered benefit, the out-of-pocket costs can be significant, says Mary Daly, chair of the department of clinical genetics at Fox Chase Cancer Center in Philadelphia. For example, if a patient is responsible for 20 percent of the test’s cost, it could run $600.

“In the smaller health-care plans, the coverage gets worse and worse,” she says.

As part of the Affordable Care Act, individual and group plans that are not grandfathered must provide genetic counseling and testing without any patient cost-sharing for women whose family history indicates a likely mutation.

For older women, Medicare generally covers genetic testing only if a woman has received a diagnosis of breast cancer. 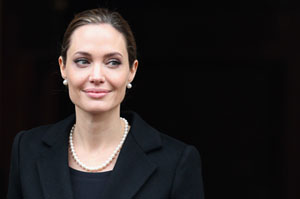 Actress Angelina Jolie explained in a New York Times column earlier this month why she chose to have a bilateral mastectomy preventatively (Photo by Oli Scarff/Getty Images).

Insurers rarely object when women who test positive for a genetic mutation decide on surgery to remove their breasts or ovaries, experts say. It doesn’t matter whether they already have cancer.

The average woman has about a 12 percent chance of developing breast cancer in her lifetime. Many women are at above-average risk for breast cancer for many reasons, including family history and dense breast tissue. They may need stepped-up screening for breast cancer, including earlier mammograms, for example, even though they’re unlikely to have a faulty gene that predisposes them to cancer.

At the University of Texas MD Anderson Cancer Center in Houston, clinicians generally recommend a highly sensitive MRI test to screen for breast cancer if a woman’s lifetime risk is 20 percent or higher, says Therese Bevers, medical director of the cancer prevention center at MD Anderson.

“Sometimes insurers don’t accept that,” says Bevers, who chairs the breast cancer screening and diagnosis panel of the National Comprehensive Cancer Network. “There’s no one standard. Each plan seems to differ.”

If the test, which can cost $2,000 or more, isn’t approved by the insurer, the “vast majority” of patients don’t do it, says Bevers.

The Affordable Care Act says patients can receive preventive services aimed at high-risk individuals without paying anything out of pocket, but which services are covered remains unclear.

Among women with cancer in one breast, a growing number want to have both breasts removed, Daly says, even in the absence of a genetic mutation. One study found the proportion of patients making this choice increased from 4.2 percent in 1998 to 11 percent in 2003.

It’s a troubling trend, she says, since the likelihood that a woman will get cancer in the other breast is small. But insurers generally approve the surgery anyway, in her experience.

But women sometimes encounter coverage problems related to services they need after they’ve been treated for breast cancer. For example, some women develop lymphedema, a chronic condition that results in fluid retention and tissue swelling that can be painful and lead to infection.

The health law prohibits lifetime dollar limits on medical services, but it allows visit limits for some types of services, Reidy says. A plan might permit only 60 physical therapy visits over a lifetime, for example.

“Someone with chronic lymphedema might blow right through that,” she says.