Consumer-directed health plans have been useful in controlling the rise of health costs over the last several years, but the survival of these plans is threatened by the new health overhaul law.

Mercer’s latest National Survey of Employer-Sponsored Health Plans found that major employers held total health benefit cost increases per employee to 5.5 percent in 2009  the lowest increase in a decade (see chart below). Participation in consumer-directed health plans, as well as health management programs, has been growing over the last few years as companies sought ways to successfully engage employees as partners in managing costs and care.

Among the most notable is the growing adoption of Health Savings Accounts. Ten million Americans now are covered by HSA-qualified health plans, up from eight million last year, according to the latest survey by America’s Health Insurance Plans. To open tax-free health savings accounts, people first must be enrolled in high-deductible health insurance plan.

Unfortunately, ObamaCare threatens to render these plans a thing of the past.  Until now, employers have had the flexibility to tailor benefit and cost structures to fit their budgets and corporate cultures, but the new health overhaul law will limit their options in the future.

Under the new law, the Department of Health and Human Services will make the ultimate ruling on HSAs when it decides how to calculate the actuarial value of the high-deductible health insurance policies that must accompany health savings accounts.

The health law requires also that all insurance policies will be required to provide a minimum actuarial value of at least 60 percent for the benefits covered.  If HHS allows contributions by individuals and employers to health savings accounts to “count” as part of the actuarial value, then HSAs and other account-based plans would likely meet the test.  But if contributions are not included, the plans likely would not qualify, removing an important tool to hold health costs down.

HSAs couple a tax-favored savings account used to pay medical expenses with a high-deductible health plan that meets certain requirements for deductibles and out-of-pocket expense limits. Most cover preventive care services, such as routine medical exams, immunizations and well-baby visits, without requiring enrollees to first meet the deductible. The funds in the HSA are deposited tax free, interest earned is tax free, and the account is owned by the individual and may be rolled over from year to year.

The new AHIP study underscores the value of consumer-directed plans in achieving key goals of the health reform effort.  Here are some highlights of the AHIP survey of people enrolled in HSA-qualified health insurance:

The charts below tell the story of success: 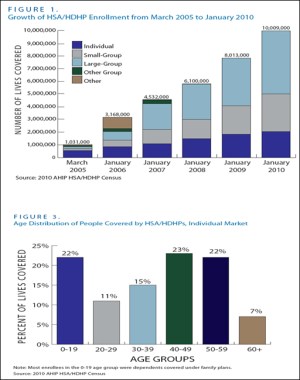 Many companies, such as Whole Foods, offer another form of CDHC plan called Health Reimbursement Arrangements. HRAs give employers more flexibility in shaping their health benefit packages, including the ability to offer account-based plans and provide incentives for prevention and wellness activities. But, unlike HSAs, HRA account balances generally are not portable after employees leave the company.

Both products are helping to make health insurance more affordable and are helping companies to lower health costs.

Competition works when consumers are engaged in getting better value for their health care dollars. Policymakers would be well-advised to make sure that these consumer-friendly plans remain as an option for both individuals and employers so they can continue to have these tools to engage employees as partners in managing health costs.

Grace-Marie Turner is president of the Galen Institute, www.galen.org, a non-profit research organization focusing on patient-centered health reform initiatives. She can be reached at gracemarie@galen.org.