When people talk about health insurance affordability, they typically focus on premiums, the sticker price for a policy. For the plans being sold through the online health insurance marketplaces next year, much of the discussion has been on tax credits that can reduce the monthly premium for people with incomes up to 400 percent of the federal poverty level ($94,200 for a family of four in 2013). 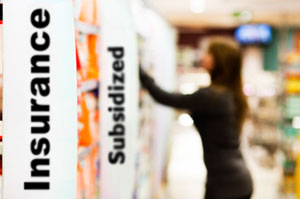 But the Affordable Care Act also established another type of financial assistance for people who buy plans on the marketplaces, also known as exchanges. Cost-sharing subsidies can substantially reduce the deductibles, copayments, coinsurance and total out-of-pocket spending limits for people with incomes up to 250 percent of the federal poverty level ($58,875 for a family of four in 2013). Those reductions could be an important consideration for lower-income consumers when choosing their coverage.

“Particularly for people who have to utilize a high amount of services, the reduction in total out-of-pocket costs” can be important, says Dana Dzwonkowski, an expert on ACA implementation at the American Cancer Society’s Cancer Action Network.

Cost-sharing reductions will be applied automatically for consumers who qualify based on their income, but only if they buy a silver-level plan, considered the benchmark under the law.

Silver plans are one of the four categories that will be sold on the exchanges, each named for a precious metal. Premiums for the plans will vary, and each will offer a different level of cost sharing for the consumer through deductibles and copayments, among other things. A silver plan will generally pay 70 percent of covered medical expenses, leaving the consumer responsible for 30 percent.

The insurer will typically cover 60 percent of expenses in a bronze plan, 80 percent in a gold plan and 90 percent in a platinum plan. All exchange plans will offer a similar package of comprehensive services that cover 10 so-called essential health benefits and cover certain types of preventive care at 100 percent.

In addition, people who earn 250 percent of the federal poverty level or less will also have their maximum out-of-pocket spending capped at lower levels than will be the case for others who buy plans on the exchange. In 2014, the out-of-pocket limits for most plans will be $6,350 for an individual and $12,700 for a family. But people who qualify for cost-sharing subsidies will see their maximum out-of-pocket spending capped at $2,250 or $4,500 for single or family coverage, respectively, if their incomes are less than 200 percent of the poverty level, and $5,200 or $10,400 if their incomes are between 200 and 250 percent of poverty.

Insurers have some flexibility in how they structure their plans to meet cost-sharing reductions. But in states that will require plans to standardize deductibles, copayments and coinsurance amounts, it’s possible to see how out-of-pocket costs may vary.

Healthy people might be inclined to go with an exchange bronze plan or the catastrophic plan (a high-deductible plan available only to people under age 30 that will have lower premiums than a silver plan), figuring they won’t need the cost-sharing assistance.

“It’s an individual calculation,” says Jennifer Tolbert, director of state health reform at the Kaiser Family Foundation. (KHN is an editorially independent program of the foundation.)

However, she says, services that aren’t preventive in nature may be subject to a much higher deductible than in a silver plan–$5,000 in the case of the California bronze plan–and could result in significant cost sharing.

“And remember, those people are going to be getting pretty significant premium tax credits for the silver plan, which will bring the cost of premiums down quite a bit,” she says.

Consumers should keep in mind, though, the cost-sharing subsidies apply to in-network expenses only. That may become an issue in some plans with limited provider networks.

“In the exchanges, a lot of insurers are going to narrower networks as a way to keep costs down,” says Christine Monahan, a senior health policy analyst at Georgetown University’s Center on Health Insurance Reforms. “If you go out of network, you could be subject to higher cost sharing and balance billing.”