Since smokers’ health-care costs tend to be higher than those of nonsmokers, is it reasonable for smokers to pay higher premiums when they buy insurance through the new state marketplaces that are scheduled to open in October? A handful of states and the District say the answer is no. 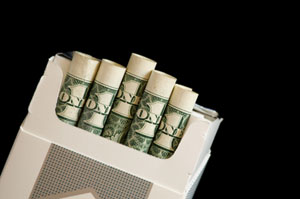 “We decided it’s not in the good interests of our people” to charge smokers more, says Mohammad Akhter, chairman of the D.C. Health Benefit Exchange Authority, which is developing the District’s online marketplace.

States have the option to reduce or eliminate the variation in rates, however, and six states and the District have opted not to charge smokers more, according to the Department of Health and Human Services. A few others have limited the premium differential to less than 50 percent.

“There’s no evidence that charging someone a higher premium will discourage them from smoking,” says Dick Woodruff, vice president of federal relations at the American Cancer Society Cancer Action Network.

It might, however, discourage someone from buying health insurance, experts say. The health law requires many plans to cover FDA-approved smoking cessation services such as counseling and medication as a preventive benefit without charging consumers anything out of pocket. If health insurance coverage seems too expensive, fewer smokers will be able to take advantage of tools to help them quit, Woodruff says.

Experts say that smokers disproportionately have lower incomes, so that a premium surcharge will hit them especially hard. Tax credits to help pay for health insurance are available to people with incomes up to 400 percent of the federal poverty level ($45,960 for an individual in 2013). But the tax credit can’t be used for the tobacco surcharge.

“The surcharge could make insurance unaffordable” for many smokers, says Matthew Myers, president of the Campaign for Tobacco-Free Kids, an advocacy group.

The premium for a 40-year-old non-smoker with a $35,000 income would be $3,857 for a silver plan, one of four types of plans with similar benefits but different levels of cost sharing to be offered on the marketplaces, according to the Kaiser Family Foundation’s exchange subsidy calculator. (KHN is an editorially independent program of the foundation.) He would be eligible for a $532 premium tax credit, reducing the premium amount he would owe to $3,325.

But if that individual smoked, his cost would increase substantially. He would get the same $532 tax credit, but the premium would be 50 percent higher, or $5,786, meaning he’d have to pay $5,254.

The toll from the surcharge, however, may be tempered, at least temporarily, for some smokers. Last week, the Obama administration announced that some technical problems would make it difficult to process some older smokers’ premiums and told insurers not to charge older smokers more than three times what younger smokers pay at least for now.

So how will insurers know if someone smokes?

“It’s going to be an honor system, basically, with people acknowledging that they’re a smoker,” Woodruff says.

If an insurer finds out that someone hasn’t told the truth, it can charge the policyholder for any surcharge amounts that should have been paid that year. But the insurer can’t rescind the policy or deny the liar continued coverage, according to the final rule governing the issue.

Johnny Shinns quit smoking 17 years ago, so the issue is academic for the 47-year-old Capitol Heights, Md., resident. When Shinns quit, money played a big role; the price of a pack of cigarettes had risen to more than $2 and he couldn’t afford it.

His friends who still smoke pay a lot more than that for cigarettes now, he says. He believes, however, they won’t be willing to absorb higher insurance premiums.

“If they have to pay a higher premium, I know they’re not going to admit they smoke,” he says.