Workers at small companies rarely get a choice of health plans. That could change for some of them when online health insurance marketplaces for businesses open this fall. 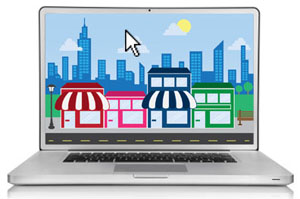 The health care overhaul requires every state and the District of Columbia to establish a Small Business Health Options Program, or SHOP exchange, to enable businesses with 50 or fewer workers to offer health insurance to their employees. These exchanges will function much like the online marketplaces for individual coverage that will open this fall, but with some key differences.

Since small employers lack the buying power of larger companies, the insurance plans they offer are often limited and their administrative costs are high. The SHOP exchanges are intended to make it easier for small businesses to offer their employees a variety of good plans, something employees prize.

“[Plan choice] is a big value added for workers,” says Linda Blumberg, a senior fellow at the Urban Institute Health Policy Center who co-authored a report on shop exchanges.

Through the exchanges, employers will be able to designate how much they want to contribute toward their employees’ coverage, and the exchange will handle the back-office functions, such as making sure the payments get to the correct insurance company. Employees, meanwhile, will be able to compare plans’ features and costs online and enroll in a plan.

At least, that’s the way it eventually is supposed to work nationwide. In June, though, the Department of Health and Human Services announced that in the 33 states where it is running the health insurance marketplaces, it would delay for a year giving workers the ability to choose among different plans. HHS said that option would be too complicated for insurers to implement by 2014.

In the remaining states and the District of Columbia, the SHOP exchanges are all generally moving forward with plans to allow employers to offer their workers more than one coverage option. How much choice workers have will be up to the employers and the states, however.

Workers may be able to choose any plan offered by a single carrier such as Aetna or UnitedHealthcare on the SHOP exchange, for example, or they may instead be able to pick any insurer but be limited to plans that are all at the same level or tier. (Health plans will be grouped into four tiers based on how much of their medical claims consumers will be responsible for: In a platinum plan, consumers will owe 10 percent of the costs; in a gold plan, 20 percent; silver, 30 percent, and bronze, 40 percent.) In some states, employers can choose to offer employees just one plan.

Small employers in the district will have those three options, says Mila Kofman, executive director of the DC Health Benefit Exchange Authority. Maryland will take a similar approach, except that employers can’t limit choice to one plan. In Oregon, employers can allow their workers to choose virtually any plan available on the shop exchange, or limit them to one of the narrower options discussed above.

Employers can work with their insurance broker to select a plan, or compare exchange plans online on their own and pick one.

On the shop exchange, “[employers] get to see all the plans–the issuers, the policies they’re offering, the premiums and benefits–all in one place,” says Kevin Lucia, senior research fellow at the Georgetown Center On Health Insurance Reforms.

Michael Brey wants to give his employees as much choice as possible. His Laurel, Md.-based Hobby Works stores employ roughly 50 workers, many of whom work part-time. (The health law requires employers with more than 50 workers to provide insurance or face a possible fine, but that mandate refers to “full-time equivalent” employees. So two half-time workers might equal one full-time worker.)

Unusual among small business owners, Brey offered employees a number of plans this year: two types of HMOs with linked health savings accounts, a PPO and a very high-deductible plan. But that’s not always the case, he says, and some years he’s only been able to offer a single plan.

Brey says he’s excited about having more options. Up to 13 insurers will be approved to sell plans through the Maryland SHOP exchange, although the opening has been delayed until January 2014, three months later than the October start date that states are aiming for.

“Right now I’m looking forward to it,” he says. “I’m hoping that the combination of more participants and more insurers [on the exchange] will keep our rates from going up.”

In addition to offering more health insurance choices through the SHOP exchanges, the health care law makes some important improvements to health insurance for small businesses. Starting next year, insurers will no longer be able to charge small businesses higher premiums because their workers have pre-existing health conditions. Small group plans sold on the exchanges and in the private market will have to provide 10 so-called “essential health benefits” that cover emergency care and hospitalization, prescription drugs and doctor visits, among other services. Out-of-pocket costs will generally be capped at $6,350 for individuals and $12,700 for families.

Small businesses are much less likely to offer health insurance than larger companies, and the number has declined in recent years. In 2011, a little over a third of employers with fewer than 50 workers offered health insurance, compared with 45 percent a decade ago, according to a study published by the Robert Wood Johnson Foundation. In contrast, 96 percent of larger firms offered health insurance in 2011, virtually unchanged from 10 years earlier.

Unlike larger employers, companies with fewer than 50 workers won’t be penalized for not offering coverage.

If a small employer doesn’t offer health insurance, workers can shop for individual policies on the marketplaces, where they may qualify for subsidies to make coverage more affordable. Subsidies will not be available to workers who buy coverage through a SHOP exchange, however.