Ten states — seven of them controlled by Republicans —hold the key to whether the Obama administration succeeds at signing up 6 million people by the deadline of March 31. 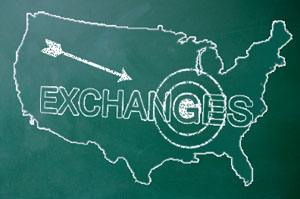 “It’s like what Willie Sutton said when they asked him why he robbed banks. ‘That’s where the money is,’” said Jonathan Oberlander, health policy professor at the University of North Carolina at Chapel Hill. “The national figures are really being driven by just a handful of large states.”

Reaching 6 million — the number projected by the Congressional Budget Office earlier this year — has both practical and political significance. The more enrollees there are, the more likely the exchanges will have enough younger and healthier people to spread insurance risks and hold down premiums in future years, say experts.

And it also gives Democrats potential bragging rights — or another headache — heading into the November elections.

Signups have been stronger than average in California, New York, Florida and North Carolina where there have been vigorous outreach efforts by states and voluntary groups, but have flagged in many other places.

“We are very happy,” said Diego Ricon, 51, who signed up with his wife Saturday at Good Samaritan Medical Center in West Palm Beach, Fla., where nearly a dozen patient navigators with laptops filled a conference room and spilled into a hallway.

Of the 10 big states, only California and New York have set up state-based insurance marketplaces for people without employer-based coverage. Those two states received millions in additional federal money for marketing and consumer assistance because they built their own exchanges.

California, with nearly 7 million uninsured—the highest number in the country— had enrolled 1 million people as of March 17, more than 30 percent of those eligible for the marketplace plans in that state.

But in Texas, where 6.2 million people are uninsured, almost a quarter of the state’s residents, the state declined to participate in the marketplace.  As in most Southern states, officials have been openly hostile to the law.  Fewer than 10 percent of those eligible for the plans had enrolled as of March 1, according to the Kaiser Family Foundation. (Kaiser Health News is an editorially independent program of the foundation.)

While several small states, including Maryland, Oregon, Massachusetts and Hawaii, have faced continuing problems with state-run websites that have hampered enrollment, they will have little effect on whether the CBO’s 6 million projection is reached, policy experts say. The CBO had previously predicted that 7 million would enroll in 2014 but scaled that back after October’s rocky rollout.

Nationally, about 5 million people had enrolled in Obamacare plans as of March 17, according to a blog post by CMS Administrator Marilyn Tavenner. Millions more had started the application process but not chosen a plan.

Among both large and small states, those with their own insurance exchanges are generally faring better than those relying on the federal marketplace because of the additional funding they received for marketing and consumer assistance.

But enrollment has varied even among the 36 states participating in the federal exchange. For instance, North Carolina has enrolled nearly 19 percent of those eligible for the marketplaces compared to less than 10 percent in Texas and Ohio, according to the Kaiser numbers.

The pool of potential enrollees is calculated to include everyone who is uninsured or has individual coverage and has an income above the level to qualify for Medicaid (which varies depending on whether the state is expanding Medicaid).

North Carolina has done comparatively well because it set up a centralized system for residents to schedule appointments for in-person assistance, Oberlander said.

But he added, “We still have a long way to go to cover all the uninsured.”

Enrollment efforts in Ohio, with almost 1.5 million uninsured residents, have been hurt by negative comments about the law by Republican politicians, among them, House Speaker John Boehner, whose district is in suburban Cincinnati, said Kathleen Gmeiner, project director for Universal Health Care Action Network of Ohio, an advocacy group.

“That negative environment has taken a toll,” she said. “We run into people all the time who say, ‘I thought the law had been repealed,’ because all they hear is their congressman has voted for the 50th time to repeal the ACA.”

Another factor hurting enrollment is that Ohio state lawmakers imposed restrictions on the groups that received federal funding to help consumers buy coverage in the online marketplaces, including barring participation from any group that got funds from a health plan, such as hospitals and clinics. Children’s Hospital Medical Center in Cincinnati was one of two organizations in that state that returned grants and dropped out.

Sara Rosenbaum, health policy professor at George Washington University, said that enrollment has also varied because insurers have been more active in some states than others. And states in the Midwest and Northeast also have a culture where people are expected to carry insurance, whereas others do not, she said.

Over the next two weeks, Obamacare supporters have hundreds of enrollment events planned in the 10 states, and top administration officials, including the president and first lady, are expected to make more trips to Florida, Texas and Ohio to talk up enrollment.

State exchange directors, for their part, are trying to put things in perspective.

“This is about changing a culture that for too many low income people is a culture of coping rather than a culture of coverage,” said Peter Lee, who runs the California exchange. “And that doesn’t change on a dime.”