Jackie Judd speaks with Politico Pro’s Matt DoBias about the super committee’s public hearing Wednesday when it heard from Congressional Budget Office Director Douglas Elmendorf. Democrats on the panel are near a $2.5 trillion to $3 trillion proposal to cut the deficit that includes about $400 billion in cuts to Medicare, though what the specific cuts might entail is still a bit of a mystery. 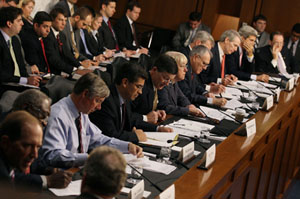 Members of the super committee work at an open hearing Oct. 26, 2011. (Photo by Mark Wilson/Getty Images).

JACKIE JUDD: Good Day, This is Health on the Hill. I’m Jackie Judd. The super committee, which has been working behind closed doors on cutting federal spending, held a rare public hearing today. The director of the Congressional Budget Office, Doug Elmendorf, was the sole witness to testify. Matt DoBias, a reporter for Politico, covered the hearing. He joins us now from Capitol Hill.  Matt, thank you.

JACKIE JUDD: Can you give us an overview of the hearing – particularly how health care either did or did not fit into the picture today?

MATT DOBIAS: I think it’s the latter.  It did not really fit into the picture in any major way during this discussion, that’s not to say that it isn’t a topic that’s being discussed broadly behind closed doors.  But in the public domain today, the focus pretty much stayed towards discretionary spending.  And this is the part of the budget that congress, lawmakers individually typically determine during the appropriations process.  And this is also part of the deal under the super committee that would get cut, in fact, if a deal isn’t reached.

JACKIE JUDD:  Much of the discussions, the negotiations, as I mentioned at the top, have been done behind closed doors.  Did the Q&A, did the back and forth between, among the committee members shed any light on where those negotiations may stand?

MATT DOBIAS:  Well, there were some pointed questions to Dr. Elmendorf, specifically on how he would score certain proposals that have been discussed, one would imagine, behind closed doors over the recent days.  Those questions go toward a broader package that has been discussed, that has been put forth by Democrats just in the recent days.  And this is a deal most Democrats on the super committee seem to have coalesced around. As first reported in Reuters, it describes a package that would reach anywhere between $2.5 trillion and $3 trillion in spending cuts.

JACKIE JUDD: Over a decade.

MATT DOBIAS: Over a ten year window. And this would be a familiar mix of new revenues – meaning new tax revenues – and on the back-end, a proposal to significantly cut Medicare, as Reuters reported and has been confirmed independently.

JACKIE JUDD: Are there any details on what that may mean for Medicare?

MATT DOBIAS: The talk is that it would result in about $400 billion in Medicare savings, and would come almost in half from benefit cuts and provider cuts.  And this is kind of a grey area.  If you look at some of the tea leaves or if you look at some of the proposals that have been proffered in the past by deficit reduction committees – that were headed up by Vice President Joe Biden, for example – there have been proposals that would, in some ways, raise the out-of-pocket costs of seniors who were seeking certain types of care covered under Medicare.

JACKIE JUDD:  This would be the outline agreed upon amongst Democrats.

JACKIE JUDD:  Which still begs the question of whether there is this huge gap between the two parties?

MATT DOBIAS:  You would look at the numbers – the $2.5 trillion to $3 trillion range – certainly is above and beyond the minimum, the $1.2 trillion that we discussed earlier – again all of this being over a ten-year window.

So, in order to reach this amount, we know that it would have to have that mix of savings vs. new revenue.  And this is where those old, thorny arguments and differences between the Democrats and Republicans come into play.  Because we know that Republicans have been largely reluctant, even adamant against, going to the tax code to find new revenues without a hint of reform down the road when it comes to reforming the tax code in general.

JACKIE JUDD:  Let me ask you one last question, and that has to do with the time left for the super committee to complete its work.  Towards the end of November, is the deadline that that’s generous because CBO wants something sooner, so the package, if there is one, could be scored.  What is the current thinking on Capitol Hill about whether that deadline will be met?

MATT DOBIAS:  It was a question that was put to Dr. Elmendorf today, and he reiterated the timeline that he has put out in the past.  That is that the CBO needs to see legislative language by early November to reach the deadlines that have been set out in the law.  And that is a leap, if you think that the super committee hasn’t been in constant discussions with the CBO already, or it’s reachable, if you think – and we have reason to think – that they have been in constant contact with the agency, and may have even sent over proposals or some sort of legislative language in the time that they’ve been meeting.

JACKIE JUDD:  That you so much, Matt DoBias, a reporter for Politico.