With the passage of a ballot initiative this month, Massachusetts became the latest state to allow the use of marijuana for medical purposes, joining 17 others and the District of Columbia.

But for patients who use marijuana to help alleviate chronic pain and nausea and stimulate appetite, legalization is only part of the battle. Health insurance rarely if ever covers its use; some patients spend hundreds of dollars a month or more on the drug. The situation may not change anytime soon, some experts say. 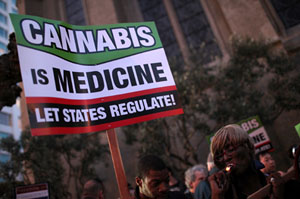 Along with heroin, LSD and some other drugs, marijuana is classified as a Schedule 1 substance under the federal Controlled Substances Act. That means the drug is considered to have no accepted medical use and a high potential for abuse.

In October, consumer advocates presented oral arguments before the U.S. Court of Appeals for the D.C. Circuit to remove marijuana from that list. Reclassification would make it easier to conduct research on therapeutic uses for marijuana, say advocates, and ultimately make the drug more accessible to patients.

Last year, the Drug Enforcement Administration denied a request to reclassify the drug, following an evaluation by the Department of Health and Human Services.

Proponents of medical marijuana argue that research shows marijuana to be effective or show promise in treating a variety of medical problems, from cancer pain and nausea to spasticity caused by multiple sclerosis. They point to the drug Marinol, which is approved to stimulate appetite in patients with AIDS and contains a synthetic version of tetrahydrocannabinol (THC), one of the active ingredients in marijuana. But health insurers remained unconvinced.

There are “legal issues in most states,” says Susan Pisano, a spokewoman for America’s Health Insurance Plans, a trade group, since it’s a federal crime to use marijuana, even in states that permit it for medicinal purposes. In addition, she says, employers and health plans want to see stronger scientific evidence that marijuana is as safe and effective as other drugs to treat pain or nausea, for example, before they would cover it.

In states that allow medical marijuana, laws vary widely. Some permit people to grow their own supply, others only permit marijuana to be distributed through a state regulated dispensary. Patients generally must get a recommendation from a physician and then register with the state. States restrict the amount someone can possess for his own use, permitting a specified number of ounces or a supply that lasts up to 60 days, for example.

A typical patient might purchase an eighth of an ounce — the equivalent of about three joints — from a dispensary at a cost of $20 to $60, says Kris Hermes, a spokesman for Americans for Safe Access. But patients’ needs vary widely.

“Some people only need a few hits at a time to experience a therapeutic effect,” he says. “Others need to smoke several marijuana cigarettes a day or ingest it with food, which takes considerably more.”

Meanwhile, even some patients in states that permit its use for medical purposes scramble to maintain their supply.

Steph Sherer is one of them. She lives in the District of Columbia, which passed a medical marijuana law in 2010 but hasn’t yet set up dispensaries to distribute the drug. (It selected six companies to cultivate the plants last spring.)

Sherer, 36, is the executive director of Americans for Safe Access, which promotes access to marijuana for medical use. She has torticollis, a condition that causes the muscles in her neck to spasm constantly and, if untreated, twists her head down to her left shoulder. Ibuprofen helped reduce the pain and inflammation, but after less than two years at very high doses, her kidneys started to fail in 2001.

At the time, Sherer was living in California, the first state to pass a medical marijuana law in 1996. Her doctor recommended she try marijuana to relieve her symptoms, and it worked. Sherer used a tincture of marijuana that she bought from a local dispensary and sprayed under her tongue several times a day. Her weekly cost: about $60.

When she moved to the District in 2006 to work on federal laws related to marijuana, Sherer lost access to her dispensary.

Until dispensaries are operating in the District, she will continue buying marijuana on the street and making her own tincture, at a cost of about $300 weekly.

Why so expensive? For one thing, a dispensary can make it in bulk, which brings down the price, she says. For another, “I don’t always make it correctly, and sometimes the medicine isn’t strong enough,” she says.