Joan Eisenstodt didn’t have a stopwatch when she went to see an ear-nose-and-throat specialist recently, but she is certain the physician was not in the exam room with her for more than three or four minutes.

“He looked up my nose, said it was inflamed, told me to see the nurse for a prescription and was gone,” said the 66-year-old Washington, D.C., consultant, who was suffering from an acute sinus infection. 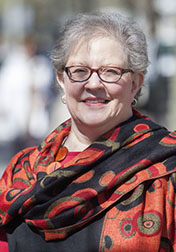 Joan Eisenstodt didn’t have a stopwatch when she went to see an ear, nose and throat specialist recently, but she is certain the physician was not in the exam room with her for more than three or four minutes (Photo by Christopher Powers/USA TODAY).

When she started protesting the doctor’s choice of medication, “He just cut me off totally,” she said. “I’ve never been in and out from a visit faster.”

These days, stories like Eisenstodt’s are increasingly common. Patients – and physicians – say they feel the time crunch as never before as doctors rush through appointments as if on roller skates to see more patients and perform more procedures to make up for flat or declining reimbursements.

It’s not unusual for primary care doctors’ appointments to be scheduled at 15-minute intervals. Some physicians who work for hospitals say they’ve been asked to see patients every 11 minutes.

And the problem may worsen as millions of consumers who gained health coverage through the Affordable Care Act begin to seek care — some of whom may have seen doctors rarely, if at all, and have a slew of untreated problems.

“Doctors have one eye on the patient and one eye on the clock,” said David J. Rothman, who studies the history of medicine at Columbia University’s College of Physicians and Surgeons.

By all accounts, short visits take a toll on the doctor-patient relationship, which is considered a key ingredient of good care, and may represent a missed opportunity for getting patients more actively involved in their own health. There is less of a dialogue between patient and doctor, studies show, increasing the odds patients will leave the office frustrated.

Shorter visits also increase the likelihood the patient will leave with a prescription for medication, rather than for behavioral change — like trying to lose a few pounds, or going to the gym.

Physicians don’t like to be rushed either, but for primary care physicians, time is, quite literally, money. Unlike specialists, they don’t do procedures like biopsies or colonoscopies, which generate revenue, but instead, are still paid mostly per visit, with only minor adjustments for those that go longer.

And many doctors may face greater financial pressure as many insurers offering new plans through the health law’s exchanges pay them even less, offering instead to send them large numbers of patients.

“Doctors are thinking, ‘I have to meet my bottom line, pay my overhead, pay my staff and keep my doors open. So it’s a hamster wheel, and they’re seeing more and more patients … And what ends up happening is the 15-minute visit,” he said.

Dr. Richard J. Baron, president of the American Board of Internal Medicine, said that patients and physicians often wrangle over control of that visit – a “struggle for control” over the allocation of time

Sometimes the struggle is overt – as when a patients pulls out a long list of complaints as soon as the doctors comes in.

Sometimes, it’s more subtle. When Judy Weinstein went to see her doctor in Manhattan recently, she knew she would get only 20 minutes with him – even though it was an annual physical, and she had waited nine months for the appointment.

So when the doctor asked if he could have a medical student shadow him, she put her foot down.

“I said, ‘Y’know, I would prefer not. I get 20 minutes of your divided attention as it is – it’s never undivided, ever – and I need to not have any distractions. I need you focused on me.’“

How did visits get so truncated? No one knows exactly why 15 minutes became the norm, but many experts trace the time crunch back to Medicare’s 1992 adoption of a byzantine formula that relies on “relative value units,” or RVUs, to calculate doctors’ fees.

That was a switch for Medicare, which had previously paid physicians based on prevailing or so-called usual and customary fees. But runaway inflation and widespread inequities dictated a change. RVUs were supposed to take into account the physician’s effort and cost of running a practice, not necessarily how much time he or she spent with patients.

The typical office visit for a primary care patient was pegged at 1.3 RVUs, and the American Medical Association coding guidelines for that type of visit suggested a 15-minute consult.

Doctors who participated in managed care networks had to give insurers discounts on their rates; in exchange, the insurers promised to steer ever more patients their way.

To avoid income cuts, Reinhardt said, “doctors had to see more patients – instead of doing three an hour, they did four.”

How doctors structure the precious 15-minute visit varies – often quite dramatically.  Generally, they start by asking the patient how they are and why they came in, trying to zero in on the “chief complaint” — the medical term for the patient’s primary reason for the visit.

But most patients have more than one issue to discuss, said Dr. Alex Lickerman, an internist who has taught medical students at University of Chicago and is director of the university’s Student Health and Counseling Services.

“The patient is thinking: ‘I’m taking the afternoon off work for this appointment. I’ve waited three months for it. I’ve got a list of things to discuss.’

“The doctor is thinking, ‘I’ve got 15 minutes.’ There is almost a built-in tension,” Lickerman said.

Studies show that doctors’ visits have actually not gotten shorter on average in recent decades. The mean time spent with a physician across specialties was 20.8 minutes in 2010, the latest year available, up from 16.3 minutes in 1991-1992 and 18.9 minutes in 2000, according to the National Center for Health Statistics; that includes visits with internists, family docs and pediatricians, which all increased by about two and a half minutes.

In 1992, most visits – about 70 percent — lasted 15 minutes or less; by 2010, only half of doctor visits were that short (the data is from the National Ambulatory Medical Care Survey, an annual nationally representative sample survey of visits to physicians).

This doesn’t necessarily mean the patient experience is improving. Medical schools drill students in the art of taking a careful medical history, but studies have found doctors often fall short in the listening department. It turns out they have a bad habit of interrupting.

A 1999 study of 29 family physician practices found that doctors let patients speak for only 23 seconds before redirecting them; only one in four patients got to finish their statement. A University of South Carolina study in 2001 found primary care patients were interrupted after 12 seconds, if not by the health care provider then by a beeper or a knock on the door.

Yet making the patient feel they have been heard may be one of the most important elements of doctoring, Lickerman said.

“People feel dissatisfied when they don’t get a chance to say what they have to say,” he said. “I will sometimes boast that I can make people feel they ‘got their money’s worth’ in five minutes. It’s not the actual time or lack of time people are complaining about – it’s how that time felt.”

15-Minute Visits Take A Toll On The Doctor-Patient Relationship