Medicare is giving bonuses to a majority of hospitals that it graded on quality, but many of those rewards will be wiped out by penalties the government has issued for other shortcomings, federal data show.

As required by the 2010 health law, the government is taking performance into account when paying hospitals, one of the biggest changes in Medicare’s 50-year-history. This year 1,700 hospitals – 55 percent of those graded – earned higher payments for providing comparatively good care in the federal government’s most comprehensive review of quality. The government measured criteria such as patient satisfaction, lower death rates and how much patients cost Medicare. This incentive program, known as value-based purchasing, led to penalties for 1,360 hospitals. 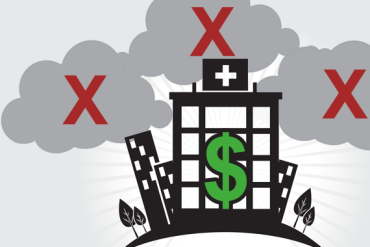 However, fewer than 800 of the 1,700 hospitals that earned bonuses from this one program will actually receive extra money, according to a Kaiser Health News analysis. That’s because the others are being penalized through two other Medicare quality programs: one punishes hospitals for having too many patients readmitted for follow-up care and the other lowers payments to hospitals where too many patients developed infections during their stays or got hurt in other ways.

On top of that, Medicare this year also began docking about 200 hospitals for not making enough progress in switching over to electronic medical records. Together, more than 6 percent of Medicare payments are contingent on performance.

“You’re starting to talk about real money,” said Josh Seidman, a hospital adviser at Avalere Health, another consulting firm in Washington. “That becomes a really big driver; it really gets the attention of the chief financial officer as well as everybody else in the executive suite of the hospital.”

Among these programs, the Hospital Value-Based Purchasing initiative, now in its third year, is the only one that offers bonuses as well as penalties. It is also the only one that recognizes hospital improvement even if a hospital’s quality metrics are still subpar. The value-based purchasing bonuses and penalties were based on 26 different measures, including how consistently hospitals followed a dozen recommended medical guidelines, such as giving patients antibiotics within an hour of surgery, and how patients rated their experiences while in the hospital. Medicare also examined death rates for congestive heart failure, heart attack and pneumonia patients, as well as bloodstream infections from catheters and serious complications from surgery such as blood clots.

Medicare this year added a measure intended to encourage hospitals to deliver care in the most efficient manner possible. Federal officials calculated what it cost to care for each hospital’s average patient, not only during the patient’s stay but also in the three days before and a month after. Often the biggest differences in medical costs between hospitals are due to what happens to patients after they leave. For instance, Medicare pays more to inpatient rehabilitation facilities than it does to skilled nursing homes, even though both treat similar kinds of patients.

“It’s your one opportunity either to make money on pay-for-performance or at least recoup some of the potential losses you have from the other programs,” said Paul Matsui, who directs data research at The Advisory Board Company.

This year, Medicare judged hospitals based on how they performed in comparison to others in the second half of 2012 and all of 2013, and how much they had improved from two years before. Medicare adds a hospital’s bonus or penalty to every Medicare reimbursement for a patient stay from last October through the end of September.

Nearly 500 more hospitals earned bonuses in the value-based purchasing program compared to last year. The biggest is going to Black River Community Medical Center in Poplar Bluff, Mo., which is getting a 2.09 percent increase, the analysis found. The largest penalty this year is assigned to the Massachusetts Eye and Ear Infirmary, a teaching hospital of Harvard Medical School, in Boston. It is losing 1.24 percent of its Medicare payments.

The Massachusetts infirmary said in a statement that it was losing only about $60,000 because most of its patients do not remain overnight in the hospital, and the penalties only apply to inpatient stays. The infirmary had so few of those cases that Medicare could not assess its performance on more than half the measures the government uses. Medicare’s program “is a poor match for what” the infirmary does, it said.

Nationally, the average bonus for hospitals under value-based purchasing was a 0.44 percent increase, while the average penalty — not including the other penalty programs — was a 0.30 percent reduction, the KHN analysis found. The actual dollar amount will depend on the mix of Medicare patients that hospitals treat through September and how much they bill Medicare. Medicare set aside 1.5 percent of its payments for the incentives, totaling about $1.4 billion.

More than 1,600 hospitals were exempted from the incentives, either because they specialize in narrow types of patients, such as children or veterans, or because they are paid differently by Medicare, such as all hospitals in Maryland and “critical access hospitals” that are mostly in rural areas.

Hospitals awarded bonuses in one year of the value-based purchasing program do not necessarily do as well the next year. Out of 2,672 hospitals that have been evaluated in all three years of the program, roughly a quarter got bonuses all three years and a quarter lost money in all three years. The rest had a mix of bonuses and penalties, the KHN analysis found.

Matsui said swings were not surprising given that hospitals are getting acclimated to the programs and Medicare has added new measurements each year. “In the grand scheme of things,” he said, “we’re still in the embryonic stage of the pay for performance programs.”

1,700 Hospitals Win Quality Bonuses From Medicare, But Most Will Never Collect