In his new book, David Barton Smith takes us back to the mid-1960s, when a small band of civil rights activists-cum-government bureaucrats toiled to get the nascent Medicare program up and running. In the process, they profoundly changed the way health care is delivered in this country.

It stands in marked contrast to the political turmoil over health care of recent years.

“In four months they transformed the nation’s hospitals from our most racially and economically segregated institutions to our most integrated,” Smith writes in “The Power to Heal: Civil Rights, Medicare, and the Struggle to Transform America’s Health Care System.”

“In four years they changed patterns of use of health services that had persisted for half a century. The fundamental moral imperative — that those needing medical care should receive it — began for the first time to reflect actual use of services. A profound transformation, now taken for granted, happened almost overnight.”

Smith, a professor emeritus of health administration at Temple University in Philadelphia, spoke with Kaiser Health News consumer columnist Michelle Andrews about his book and the implementation of Medicare, which for the first time provided a guarantee of health insurance for the elderly. The promise of payment for care for the growing number of elderly patients was a big financial incentive for hospitals, even if it meant desegregating. “Basically the hospitals, except for a few very well-endowed ones, had a choice of participating in Medicare or going bankrupt,” he said.

Smith’s work is also the subject of a companion documentary under development, which is being funded by the National Endowment for the Humanities.

Here is an edited version of that conversation.

Q. It’s been exactly 50 years since the Medicare program began providing health coverage to older Americans. Given today’s political gridlock, it’s hard to imagine how such sweeping changes in health care could have been accomplished. What was different then?

Lyndon Johnson’s landslide election in 1964 made it possible for him to do almost anything. He had the Congress, the Senate and he had the ambition. What is strikingly different is the level of trust that Republican politicians had back then in some of the federal bureaucrats. The Social Security Administration was pretty much given a free hand in terms of translating the law and implementing it. I can’t imagine that happening today. Every step would be blocked. 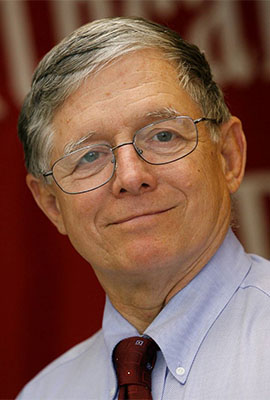 Q. In your book, you describe how there were separate hospitals for blacks, for whites and for various religious groups. Hospitals that admitted both blacks and whites had segregated wings, waiting areas and patient rooms. To what extent did health care simply reflect prevailing norms of the day?

Q. Title VI of the Civil Rights Act — which was passed into law only a year before Medicare — prohibits discrimination on the basis of race, color or national origin in programs that receive federal financial assistance. The way you tell it, applying Title VI to Medicare and prohibiting hospitals that discriminated from participating in the program wasn’t something that people focused on, at least at first. What happened?

In the entire debate over the passage of Medicare, there’s no mention of what the implications are, related to Title VI. It didn’t come up, nobody wanted to raise it. The assumption was that some accommodation would be made that would allow segregation to continue on a separate but equal basis. So everybody thought it was going to be business as usual.

The 1954 Brown v. Board of Education Supreme Court decision, which ended legal segregation in the schools, reinforced the assumption that little would happen because very little progress was being made in desegregating the schools. The decision ordered states to end segregation with “all deliberate speed” but that [meant] no deliberate speed. [So] the hospitals thought they would have to come up with a plan and would proceed very gradually and cautiously with doing this, which would mean it wouldn’t get done. 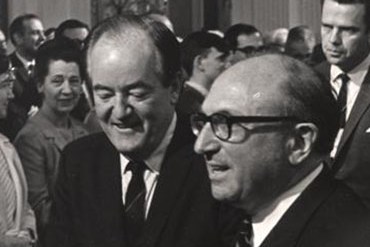 Hubert Humphrey and Wilbur Cohen at the White House. (Photo courtesy of the National Institutes of Health)

Q. But that’s not what happened. Over the course of several months, a small group of government workers implemented the Medicare program. From the start, they said that hospitals that discriminated couldn’t participate. How did they manage it?

Wilbur Cohen and the people in the Social Security Administration were absolutely masterful in pulling this together in such a short period of time. They knew exactly how to get things done and they paid attention to the details. It’s remarkable that without the computers that we have today or the Internet, they were able to do this all in 11 months. They were just good professionals.

What’s different is the Title VI enforcement part. The Public Health Service was responsible for enforcing the Medicare nondiscrimination provisions. That created an interesting takeover by the civil rights movement. The three people who were writing the rules were really committed civil rights activists. They wrote the regulations following the direction and pleading of the civil rights organizations: You cannot have “all deliberate speed,” you cannot let anybody in the program unless they’ve complied with some very specific requirements, including no discrimination in  terms of where patients are placed or where people could go to the cafeterias or where they could be employed.

Workers from the Social Security Administration and the Public Health Service volunteered to do the hospital inspections, people who were already committed to civil rights. What actually happened in many cases, if you read through inspectors’ site visit reports, they relied very heavily on local people and civil rights activists and black employees at the hospitals to tell them if the hospital was complying or not.

Q. To what extent does the Affordable Care Act help to address the economic and racial disparities that persist in health care today?

I think it’s a wonderful addition. I find it ironic that the hospitals in the same states that fought the desegregation with the implementation of Medicare are the states blocking the expansion of Medicaid. [The Medicaid program was signed into law the same day as the Medicare program and faced the same Title VI requirements.] Those are the states that are most in need and the hospitals are the ones that need the money. If they could, they’d sign on the dotted line.

Q. There has been talk at various times about creating “Medicare for All.” Given what you know, what are the odds of that ever happening here?

The odds are better now than a few years ago. Because of the ACA, but also because people are beginning to understand some of the limitations of a privately insured system. It’s more complicated, it’s more costly, it’s harder to get good competitive pricing from hospitals or from drug companies. And this idea is something that’s been resisted by the insurance industry. But I get the sense that people are getting a little bit more impatient. Although a lot of Republicans bash Obamacare, I don’t hear a lot of them bashing Medicare. The resistance would be strong, certainly. This is a very interesting year.

1965: The Year That Brought Civil Rights To The Nation’s Hospitals