More than 16,000 applications on behalf of 28,700 people have been completed through the state’s insurance marketplace, Covered California, officials announced Tuesday.

Executive Director Peter Lee said 16,311 applications, some representing several family members, were completed between Oct. 1 and Oct. 5 and another 27,305 are in process.  Lee did not specify how many of the applicants would receive coverage through the state-based exchange or how many qualified for Medi-Cal, the state’s Medicaid program. 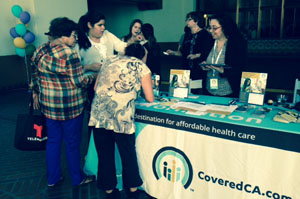 The applications were completed online, in person or over the phone, he said. About 400 small businesses also registered.

Lee also said more than 59,000 people have dialed into the call centers and about 987,400 people have visited the website, CoveredCA.com.

“The response has been nothing short of phenomenal,” he said during a Sacramento press conference Tuesday morning. “These are big numbers, and they’re proof of the pent-up demand for coverage.”

Like the federal enrollment website and others around the nation, Covered California’s site had a bumpy start last week and had to be taken down more than once. In addition, there were long wait times for callers.

Lee said the phone call wait time is down to four minutes and the online enrollment site is working more smoothly.

Covered California also added an online tool this week that allows consumers to search for their doctors.  Even before enrolling, people can type in their doctors’ names and nearby zip codes to see if they are participating in the plans.

Anthony Wright, executive director of the consumer group Health Access California, said the provider search tool is very helpful for people looking to sign up for coverage. “It will be a powerful part of their decision process,” he said, adding that it may be second only to the cost of premiums.

Wright also said that the numbers are strong for the first several days. “We never thought there would be a huge burst of enrolling in the first week,” he said. “Human nature will be that the big pileup will be at the deadline.”

Applicants have until Dec. 15 to sign up for coverage that starts Jan. 1. The enrollment for the insurance plans will continue through the end of March.

Ampelia Lopez, a barber in East Los Angeles, said she hopes to get insurance through Covered California but said she was reluctant to enroll right away because of the government shutdown. Lopez said she hopes to get online soon and sign up for coverage so she doesn’t have to pay for her doctor’s visits.

Paul Torrigino, who lives in Sacramento, said he couldn’t afford medical insurance before but recently signed up for a bronze plan and will have a monthly premium of just $1 when the Affordable Care Act policies take effect at the beginning of the year.

“It was a question of, ‘Do I have the insurance or do I eat?'” he said during Tuesday’s press conference. Now, he said, “I have a really great sense of relief.”

Nationally, about 37,000 people have completed applications for coverage, according to the eight state exchanges that have supplied data to Kaiser Health News. This includes nearly 9,500 in Washington state and more than 7,000 in Kentucky. State exchanges in Oregon, Minnesota and Colorado say they will not release any data on completed applications until end of October.

Phil Galewitz contributed to this report.