When Pam Lipp’s 18-year-old daughter Amanda needed to be admitted to a psychiatric hospital in 2010, she thought it would be easy to find her a bed.

Instead, Lipp says, “It was a nightmare.”

Her daughter had been admitted to a psychiatric crisis center during an episode of psychosis but she could only stay there for 72 hours. Lipp asked the crisis center for help finding her a bed and was told she was on her own.

So Lipp plugged her phone into the wall in the waiting room and started calling one hospital after the next. They were all full. They wouldn’t reserve a spot when a bed opened, nor would they call to let her know. So she called each one every half hour to check. After eight hours, she found her daughter an open bed near their home in Fair Oaks, California.

Usually, it’s an emergency room staff or medical providers making such calls, rather than a patient or caregiver. The result, however, is the same: Finding an available inpatient psychiatric bed in the state of California can be extremely difficult. Many patients with acute psychiatric conditions spend days deteriorating in hospital emergency departments while they wait.

If I hadn’t done what I did, our daughter would most likely have been discharged, back on the street with nowhere to go.

But how exactly to solve the problem has become a controversy in Sacramento.

An Assembly bill backed by the California Psychiatric Association and the Steinberg Institute, a mental health policy organization, seeks to improve the process by establishing an online registry to collect and display information to help medical providers find psychiatric beds. But the California Hospital Association is staunchly opposed, saying that finding the right placement for a patient is much more complex than identifying an empty bed, and a registry could actually hinder efforts to get patients appropriate treatment.

The Assembly’s Committee on Health plans to hold the first hearing on the bill on April 12.

Under the proposed legislation, AB2743, facilities with psychiatric beds would be required to update the registry as the beds became available, and emergency medical providers would be able to log on to search for openings.

“A bed registry would eliminate the need for rounds and rounds of calls over hours and hours. Why not just cut that time out and go straight to the source?” asks Anna Hasselblad, public policy director at the Steinberg Institute.

The issue is not unique to California. Nationwide, the number of state psychiatric beds is shrinking. In 2010, there were 50,509 state psychiatric beds, a decrease of 14 percent since 2005, according to a 2012 report from the Treatment Advocacy Center, a nonprofit organization dedicated to removing barriers to treatment for people with mental illness. That’s a total of about 14 beds per 100,000 Americans, and in some states including Arizona, Minnesota, Iowa, there are fewer than five.

Adding beds is a long-term goal for many mental health advocates, but it’s a huge task that could take years.

“We have to use the beds we do have and we have to know where they are. It can be a hit or miss process. It needs to be more reliable,” said Hagar. “We’ve heard instances where people were told there were no beds when in fact it turns out later that there were. An online registry would fix that issue.”

It would also provide data on exactly what types of additional beds are needed and where, he said.

The hospital association is not convinced it would work.

“On first blush, if you are not in the trenches, it seems like the best and easiest solution in the entire world. But the reality is that the bill will really increase the amount of time and the frustration people have trying to locate psychiatric acute-levels of care in our state,” said Sheree Lowe, the hospital association’s vice president of behavioral health.

Beyond finding an open bed, staffers must also factor in the age, gender, illness and acuity of the patient.

“You have to take under consideration your staffing needs, the needs of the other patients, and the therapeutic milieu for the safety of all patients and all staff. And that’s not something you can put into a drop-down menu,” said Lowe.

Requiring hospital staffers to report all those changing dynamics in an online registry, she added, would be yet another administrative burden that could cut into hands-on patient care.

Many states have some sort of computerized tracking system for psychiatric beds, but few are mandatory. Lowe points to a recent effort in Virginia to create a mandatory registry similar to the one being proposed in California as evidence that they don’t work.

In January, the Virginia state inspector general reported that more than half of users of the online registry said it takes longer to find a bed for a patient than it did before the registry was established, in part because hospitals were not accurately updating information about their beds.

One solution, she said, would be to include a fine in the bill for hospitals that do not keep the registry updated. “Hospitals aren’t going to do this unless they’re absolutely mandated to.”

It can be a hit or miss process. It needs to be more reliable.

Despite the opposition of the hospital association, the emergency room doctors who staff their facilities are generally supportive of the bill. Holding psychiatric patients for days in the emergency department is “a worst case scenario for everyone involved,” said Elena Lopez-Gusman, executive director of the California chapter of the American College of Emergency Physicians.

And she said the hospitals with psychiatric beds may be making the problem worse by trying to reserve beds for patients with private insurance.

“Our physician members have reported a significant level of difficulty in getting what they feel is an accurate assessment of bed availability,” said Lopez-Gusman. “They might call the same facility in a short time for two different patients with different types of insurance, and get different answers on whether or not there’s a bed available. So our thought is that more transparency reduces the hospitals’ ability to hide available beds.”

Lowe of the hospital association denies that psychiatric hospitals are holding beds, which would be a violation of federal law.

Assemblymember Susan Talamantes Eggman, the Stockton Democrat who wrote the bill, said she believes the bill has a good chance of passing. 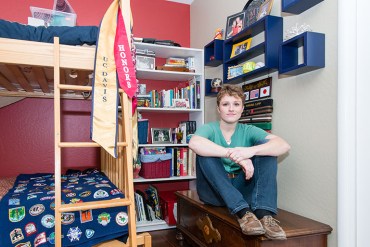 “We are very hopeful. There’s a good coalition, and everyone is talking about mental health these days,” she said. “This is a practical, small step we can take. It’s hard to argue against it.”

Pam Lipp, who struggled to find a bed for her daughter, said the idea of establishing a registry is “absolutely phenomenal.”

“Our situation is exactly the kind of situation that hopefully this bill will help,” she said.

“If I hadn’t done what I did, our daughter would most likely have been discharged, back on the street with nowhere to go, and we would have just repeated the cycle again. Maybe she wouldn’t have survived.”

A Dearth Of Hospital Beds For Patients In Psychiatric Crisis