Sitting at an old picnic table in front of a dilapidated house, María Díaz, a hotel housekeeper, tells stories of the rejection that comes with living in impoverished Texas colonias.

The trash on her street is not picked up regularly, so she is used to a wretched smell at night when her neighbors burn their garbage. There is no drainage system on her block, so Díaz, a 44-year-old single mother of four, is accustomed to heavy flooding on her street when it rains. 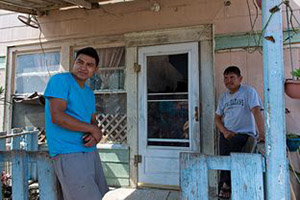 Martin Gomez Jr. and his father Martin Gomez Sr. both work, but make so little that they aren’t interested in buying health care insurance (Photo by Eddie Seal/The Texas Tribune).

As she looks into buying private health insurance under the federal Affordable Care Act, which requires most people to obtain coverage in 2014, Díaz is facing a new type of rejection: She probably does not make enough money to qualify for tax credits to purchase coverage through the federal health insurance marketplace.

Thousands of residents of Texas’ colonias along the U.S.-Mexico border are in similar situations after falling into the “coverage gap” created when Texas’ Republican leadership declined to expand Medicaid eligibility for poor adults under the ACA, saying Medicaid was a broken system. Living in unincorporated subdivisions, where the uninsured rate is between 50 and 80 percent, colonia residents may be largely left with little hope of obtaining coverage.

But community-based organizations are working to educate residents on the federal law and walk them through the application process with the goal of helping them obtain a “hardship waiver” to be exempted from having to buy health insurance.

“We help people go through the application process, even if we can figure out pretty quickly that they’re in the gap,” said Rachel Udow, the program director for Migrant Health Promotion, a Weslaco-based group with six full-time navigators charged with helping individuals sign up for health insurance through the federal marketplace. “Because at the end, they’ll receive the determination that essentially says they’re in the gap, which they’ll then be able to use to access the waiver.”

The hardship waiver exempts those living in the coverage gap — individuals who make less than $11,490 a year or a family of four making less than $23,550 — from paying a penalty when they file their 2014 taxes.

While some navigators have been surprised that several colonia residents have completed the application process and enrolled in the marketplace, the gap keeps many colonia residents from continuing the process after they realize they cannot afford full-price premiums, which can cost hundreds of dollars a month without tax credits, Udow said.

Colonia residents, who are predominantly Hispanic migrants, are among the minorities who make up three-quarters of uninsured adults in the state’s coverage gap. But with more than384,700 individuals living in Texas’ colonias, which are in 10 border counties, outreach seems to be a bigger problem.

Some colonia residents say they have never heard of the Affordable Care Act, although they live in areas that could benefit most from increased access to health insurance. The colonias, which were first established in the 1950s, have been known to be a breeding ground for disease because they often have no running water, adequate sewage systems or solid waste disposal, among other basic infrastructure.

Ann Carol Cass, executive director of Proyecto Azteca, a nonprofit affordable-housing organization in the Rio Grande Valley, said the organization refers colonia residents to navigators and helps with enrollment efforts but added that being uninsured was a situation to which colonia residents were accustomed.

“They have never had health insurance, so to be left out doesn’t change much in their lives,” Cass said. “I call it ‘learned helplessness,’ after so many years of being exploited and excluded. It’s just the way life is for them.”