This story has been corrected to reflect new information from officials at Trinity Medical Center about isolation procedures and to correct a citation. 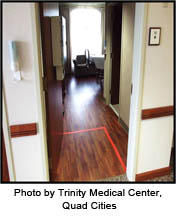 That effort at Trinity Medical Center, a group of four hospitals in the Quad Cities area of Illinois and Iowa, involved helping staff deal more efficiently with patients who had to be isolated because of serious infection risks. The Infection Prevention Team at Trinity discovered that marking a 3-foot-by-3-foot floor space with duct tape at the entrance of the patient’s room saved nurses and other staff members time and resources because staying in that area meant they didn’t have to wear gowns and gloves each time they came in and out of the room. What’s more, both patients and medical staff reported that they were able to effectively and easily communicate while using the designated space, called the red box.

Janet Nau Franck, a registered nurse and independent consultant at Trinity, recently published a study describing the effort in the American Journal of Infection Control, a  publication of the Association for Professionals in Infection Control and Epidemiology (APIC).

“The original intent was compliance” with state laws that set standards for dealing with isolated patients with infectious disease, Franck says. When she came to Trinity two years ago, officials there had already started the red box system, but she helped study whether it was working.

Traditionally, doctors and nurses are required to wash their hands and don hospital gowns, gloves and mask before entering the room of an isolated patient. At Trinity, medical practitioners inside the taped area are not required to wear the isolation attire, but once they step out of that area and approach the patient, they must wear the gloves, mask and gown. What Franck and the rest of the infection prevention team found was that by eliminating the need for gloves and gowns before entering the room, practitioners and patients were satisfied and still complied with hospital standards.

From January 2009 to December 2010, Franck and her colleagues observed the number of times the nursing staff stepped into the red box area and how long they took to put on the proper hygienic attire. They calculated that the hospital saved more than 2,700 hours and $110,000 over the course of the year. But Franck says that’s a conservative estimate since they only observed the nursing staff, even though physicians and rehabilitation staff also employed the red box method.

For Rochelle Tinman, the director of critical care at Trinity, the red box has been a big help. Anywhere from half to a third of the patients in her unit are “isolated” to prevent the spread of infections.

Tinman says patients would hit a call light to signal a nurse or doctor, but the rigorous gowning procedures created a delay and frustrations for both patients and hospital staff. “We were seeing nurses gown, glove and mask outside of the room and the patients were getting frustrated because the call light wasn’t getting answered in a timely manner.” Simple requests were taking much longer to respond to because of the hygienic mandates. “We saw our nursing staff maybe avoiding the call light–not answering them as quickly as possibly–because they knew that kind of time constraint that was being placed on them just trying to get in [the room].”

Franck said that she has been contacted by several doctors eager to employ the red zone in other hospitals. She recognizes the irony in how a taped-off zone across from the patient’s bed could actually help improve the patient-doctor relationship.

“The staff have more opportunities for face time—they can pop in and ask patients how their pain level is, how they are feeling. It’s funny because I think we overlook the most simple opportunities that can provide the reward.”