Butte is an old mining town tucked in the southwest corner of Montana with a population of about 34,000. Locals enjoy many things you can’t find elsewhere — campgrounds a quick drive from downtown and gorgeous mountain ranges nearby. But in Butte, as in much of rural America, advanced medical care is absent.

People in Butte who experience serious trauma or need specialty care rely on flights — air ambulances — to get them the help they need.

There were close to 3,000 air ambulance flights in Montana last year. And Amy Thomson of Butte was on one of them.

Last year, she was curled up among the medical bags in the back of a fixed-wing plane. Her 2-month-old daughter, Isla, had a failing heart, and the hospital that could help her was 600 miles away.

Thomson watched as Isla was placed in a small box strapped to a gurney inside the air ambulance.

“They did such wonderful care of her, and they tried to take great care of me, but in that moment I couldn’t let go,” Thomson said. “I was so afraid that if I closed my eyes, that would be my last vision of her.”

Seattle Children’s Hospital saved Isla’s life. Her family’s health insurance took care of all costs beyond her deductible — except for that critical air ambulance ride to Seattle.

The way the Thomsons read their insurance plan, they thought any emergency medical transportation was covered.

But it turns out, the air ambulance company was out of their network, and they got a bill for $56,000.

“Coming back and looking at that bill and thinking you’ve got to be kidding me,” Thomson said. “Here is the flight that ultimately saved Isla’s life by getting her to where she needs to be. And yet [it] is going to put us potentially in financial ruin. Or at least kill our future dreams as a family.” 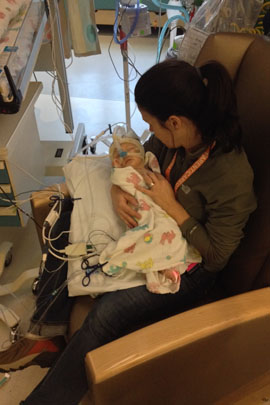 When patients need an air ambulance, the first priority is getting them the care they need as fast as possible. So, patients don’t always know who is going to pick them up or if the ambulance is an in-network provider.

That can lead to surprise expenses if the companies ask patients to pay the bill or any balance left after the insurance plan’s out-of-network coverage is applied.

“Of all the complaints we have received in our office, not one person was uninsured,” said Jesse Laslovich, legal counsel for Montana’s insurance commissioner. “They’re all insured. And they are frustrated as heck that they’re still getting $50,000 balance bills.”

The cost of an air ambulance bill is split into two main parts, according to a study completed by the Montana legislature. First, a liftoff fee, which ranges from $8,500 to $15,200 in Montana, and then a per-mile charge for the flight, which ranges from $26 to $133 a mile.

Some air ambulance companies offer membership programs as protection from big bills. For an annual fee of about $60 to $100, patients face no cost beyond what their health insurance pays if they use that company’s services.

But, Laslovich said that doesn’t always work because a patient can’t always know who is going to pick them up.

There is a lack of understanding about the actual costs of running an air ambulance business, said Rick Sherlock, the president of the Association of Air Medical Services. The costs include specialized labor, training, equipment and fuel.

“So those cost drivers are there and [it’s necessary] to maintain readiness to respond 24 hours a day, seven days a week, 365 days a year,” Sherlock said.

He says some air ambulance companies remain out of insurance networks because they can’t always reach in-network deals that allow them to stay profitable.

“I think what you also have to look at is that negotiations between [air ambulance] companies and insurance companies take place when there’s good negotiations on both sides,” Sherlock said. “In situations where there may be only one or two insurance options in an area, it’s harder and harder to negotiate on a level playing field.”

For Laslovich, it comes down to one thing:  “You want to know what my personal opinion is about what the problem is? It’s money.”

For people with insurance who think they’re protected against crippling health care bills, the cost of an air ambulance ride can be a shock.

Amy Thomson ended up not having to pay, but it took repeated appeals. According to Thomson, on the same day her family was arranging to meet with a lawyer, she was notified by her insurance company that it would pay an additional amount of about $30,000, on top of the $13,000 out-of-network fee, to the air ambulance company, and the air ambulance would waive the rest of the fee.

Isla Thomson turned 2 in November. She’s a healthy child with big blue eyes, but at times her mom still worries.

“Nobody takes a lifeflight for a joy ride. You’re not going on kayak.com and booking a lifeflight,” she said.

Thomson didn’t think the flight should be free, yet the huge bill felt wrong, too: “I ethically believe this is a part of healthcare. This is not some separate entity. There is something ethically wrong that these companies are profiteering off of people’s worst moments in their lives.”

A Montana interim legislative committee is investigating air ambulance companies’ wide range in pricing within the state. The state of Maryland has undertaken a similar investigation.

In North Dakota, an air ambulance is suing the state for adding regulations on the industry.