Consumer advocates have been complaining for months that the Obama administration’s 21-page application to sign up for health insurance in the exchanges is too long and complicated. The designers of the application estimated it would take 45 minutes to complete. 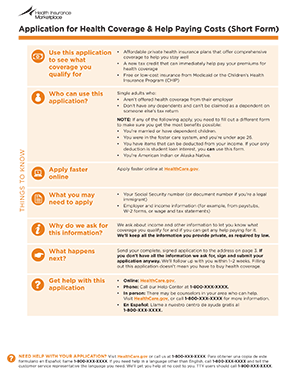 The administration heeded the advocates’ pleas with the introduction Tuesday of a modified application of just 3 pages for individuals who are not offered health coverage from their employer.

The application for families and individuals with employer coverage has been whittled down to about 12 pages.

President Barack Obama pointed to the modifications in a press conference Tuesday as an example of the fine-tuning that’s going on as the federal government prepares to roll out the main provisions of the Affordable Care Act beginning in October.

“Immediately everybody sat around the table and said: ‘Well, this is too long, especially, you know, in this age of the Internet. People aren’t going to have the patience to sit there for hours on end. Let’s streamline this thing,'” Obama said. “So we cut what was a 21-page form now down to a form that’s about three pages for an individual, a little more than that for a family, well below the industry average. So those kinds of refinements, we’re going to continue to be working on.”

Marilyn Tavenner, acting administrator of the Centers for Medicare and Medicaid Services, emphasized the march toward open enrollment in October. “This is another step complete as we get ready for a consumer-friendly marketplace that will be open for business later this year,” Tavenner said in a press release.

But are the revised applications really simpler? Or just shorter?

There are a few small changes in the way the questions are asked, but the bulk of the paper reduction comes from the decision to have three different forms: one for single adults who aren’t offered any other coverage (that’s the 3-pager), one for families, and a third for people who don’t want financial assistance. The old version had room to explain the details of six separate family members, while the new version has room for only two. That means any family with more than two people has to make photocopies of the application to include everyone else.

Meanwhile, some of the extra information asked for in the original version, including details of an employer plan, a page to explain whether you’re an American Indian and a request for assistance completing the application, have all been tacked on as appendices.

A Shorter Exchange Application. But Is It Simpler?