NEWPORT BEACH, Calif. — Alongside one of this city’s canals, blocks from the beach, Sandra Lopez is finally living her idea of the American dream.

In 1996, six years after crossing the border from Mexico without papers, she began working at Las Fajitas, a popular Mexican restaurant as a cashier and cook. With the help of her boss, she received a work visa in 2001. 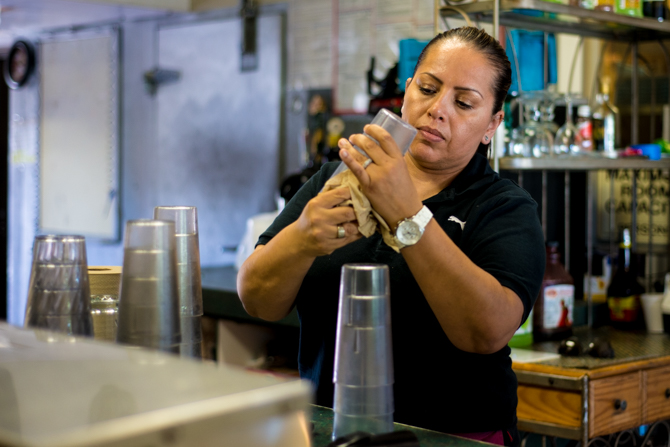 Sandra Lopez, 41, owner of Las Fajitas in Newport Beach, plans to look into the Small Employer Health Options Program (SHOP) to see if she can offer health insurance to her staff next year (Photo by Heidi de Marco/KHN).

Eleven years after that, she bought the business – a bustling establishment where Lopez knows most customers by name. Mexican lanterns hang from the ceiling, and cheers from a soccer match on TV fill the room.

Lopez said the income from her small business fluctuates monthly. “People think that because you own a business, you have lots of money…that life is easy,” she said.  “But it’s hard work and I have so many bills to pay.” 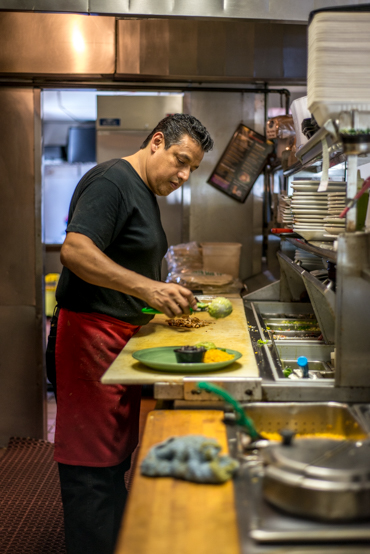 Jorge Castaneda, a cook at Las Fajitas, has been uninsured most of his adult life. The 47-year-old says he hardly gets sick, but is waiting for his employer to offer health insurance (Photo by Heidi de Marco/KHN).

Lopez, her husband, and an adult child in the household live on about $46,000 a year.

For years, she felt she couldn’t afford health insurance for herself, let alone her half dozen employees: “How can I offer them something I don’t even have?”

The 41-year-old, now a legal resident, had been uninsured since she came to the United States. “If I felt sick, then I would self-medicate,” she said.   “I became my own doctor.”

Lopez took home remedies or asked friends to bring her medicine from Mexico. She thanks God that neither she nor her husband, a construction worker, needed any serious medical attention – but her 26-year-old son, Juan Angiano, hasn’t been so lucky.

Also a legal resident, he has epilepsy, which can be dangerous when not controlled with medication. His seizures are unpredictable and make getting a job nearly impossible. A recent ambulance ride and visit to the emergency room left the family with more than $9,700 in medical bills they couldn’t pay.

“I either paid the rent, or the electricity, or the hospital bill,” Lopez said.

So when she heard about the Affordable Care Act and the possibility of qualifying for a federal subsidy to pay the premiums, Lopez was eager to enroll.

She went on the Covered California website, the state’s health insurance marketplace, and, after she spent almost two hours online, the site crashed.  She almost gave up. “I also tried to call in, but all I got was a recording,” she said.  “I left two messages and never heard back.”

Determined to learn more, she sought help from an insurance agent who walked her through her options. 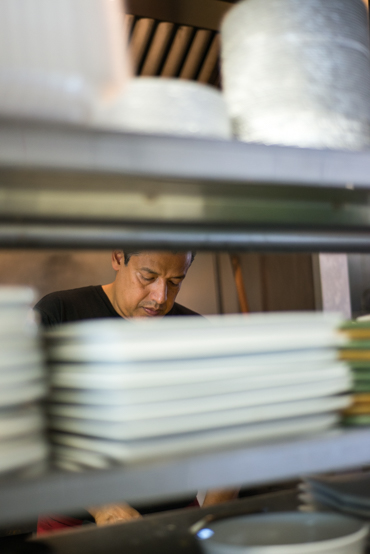 Jorge Castaneda, 47, has been a cook at Las Fajitas since it opened in 1995. Lopez and Castaneda worked side by side until she took over the restaurant (Photo by Heidi de Marco/KHN).

Based on her household income, Lopez qualified for a $750 monthly subsidy to purchase coverage for herself, her husband, and their son, who was then 25 and qualified under the law to be added to his parents’ policy.  Although most young adults lose eligibility under their parents’ plans when they turn 26, his insurer is allowing him to retain his coverage because of his disability and dependent status, Lopez said.

For now, she pays a monthly premium of $331, with a $5,000 deductible – expensive, but well worth it to her.  “Knowing that my son has insurance is comforting,” said Lopez. “It’s a huge relief.”

Now that her family is covered, she wants to research options for her staff. Her business is not required to offer health insurance because she has fewer than 50 employees, but she plans to look into the Small Employer Health Options Program (SHOP) and the tax breaks it offers next year.

“The fastest growing sector of small business owners is Latinas,” said Marci Davalos, Southern California outreach manager for the Small Business Majority, a nonprofit organization advocating for health-care reform.  But they are least informed about their health insurance options, she said.

Thirty six percent of Latinas lacked health insurance in 2012, according to the Kaiser Family Foundation. (KHN is an editorially independent program of the foundation.)

“It’s really important that we reach out to this community in Spanish,” said Davalos. “We know who really makes the decisions in the family when health care is concerned…it’s the women.”

For now, Lopez is still paying off private loans from when she took over the restaurant, so she encourages her employees to obtain health insurance through the state exchange. Some of them may qualify for Medi-Cal, the state health insurance program for the poor or disabled.

Jorge Castaneda, 47, has been a cook at the eatery since it opened in 1995. He has not been insured for most of his adult life. “It would be nice to have it, but I hardly get sick,” he said. “So I don’t really think about it.”

Not too long ago Lopez was in their shoes, looking to her boss for help — now she wants to do the same for them.

“For now, I can only afford insurance for my family,” she said. “But my employees are family, too.”

See how others are faring under Obamacare: California’s Uninsured In A Changing Environment