Thousands of Americans are again searching for health insurance after losing it for 2016. That’s because health cooperatives — large, low-cost insurers set up as part of Obamacare — are folding in a dozen states.

The failure of Colorado’s co-op has hit Rick and Letha Heitman hard. They are currently customers of the Colorado HealthOP, which is closing up shop at the end of the year. The couple, who own a contracting business, say the co-op proved to be a life-saver when Rick was diagnosed with aggressive prostate cancer last spring.

“I owe them for taking care of me. They helped me at a time when I needed it a lot,” he says.

About 80,000 people are in the same boat as the Heitmans, on the hunt for new insurance plans on Colorado’s exchange. HealthOP’s CEO Julia Hutchins says the co-op got walloped by the equivalent of a fast-moving tornado after the federal government said it wouldn’t be paying co-ops millions in subsidies they had expected.

“We were really blindsided by that,” she says. “We felt like we’d done our part in helping serve individuals who really need insurance and now we’re the one left holding the bag.”

And, she insists the co-op was on track to be profitable. Colorado HealthOp is one of 23 nationally in 22 states that opened after Obamacare was enacted. The startups were supposed to shake up the traditional marketplace by being member-owned and nonprofit, but it was tough to figure out how much to charge. They needed to estimate how much medical care their customers would use, and they had to do that without data from previous years and without the cushion of a reserve fund. Established insurers can use reserves and experience to recover if they underestimate premium prices in a given year. 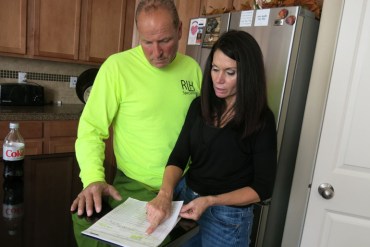 Rick and Letha Heitman are on the hunt for a new insurance plan on Colorado’s exchange. Their current insurance through the Colorado HealthOP will end when the co-op shutters at the end of the year. (Photo by John Daley/Colorado Public Radio)

Many co-op plans were priced low, and customers poured in. But these new customers had high health costs, so the co-ops had to start paying a lot of bills. The math didn’t add up. On top of that, they were counting on a variety of funding streams from the federal government, and not all of them materialized.

Linda Gorman, with the Independence Institute, a conservative-leaning Colorado think tank, says the new co-ops were in over their heads.

“You shouldn’t go into business counting on federal subsidies,” she says. “The notion that you should beat up on for-profit entities and then form these nonprofits and everything will be magically OK is unfortunate to begin with. We’ve wasted a lot of taxpayer money on that.”

But the HealthOP’s senior IT manager Helen Hadji, a Republican, blames conservatives in Congress for not authorizing the money needed to keep the cooperatives afloat.

“This is a federal failure,” she says. “This is all a political battle to dismantle Obamacare.”

Colorado’s co-op captured 40 percent of the individual market on the state’s exchange. Now as customers, like the Heitmans, hunt for new insurance, they are finding higher prices: They paid about $500 a month last year. Next year, it could be double or triple that.

But it’s the price they’ll pay to keep Rick with the doctors who are treating his cancer.

In Connecticut, the opposite story is playing out. If Colorado saw an early surge in membership because of low prices, Connecticut’s co-op nearly priced itself out of the market in its first year. With rates much higher than its competitors, HealthyCT only got 3 percent of the state’s business under the Affordable Care Act.

“In that first year, the reason we had such low market share was that consumers — new to the industry, new to insurance — most of those individuals bought on price,” says Ken Lalime, who runs the co-op.

And, he says, starting it was hard.

“Nobody’s built a new insurance company in the state of Connecticut in 30 years,” he says. “There’s no book that you pull off the shelf and say, ‘Let’s go do this.’”

But even though that meant relatively few signups in year one, the slow ramp-up actually helped. He didn’t have a huge number of claims to pay right out of the gate, and the ones he did pay didn’t break the bank.

“Hindsight, yes, that didn’t hurt us. To be able to take it slowly,” he says.

In year two, he had more competitive average premiums — and his company went from 3 percent market share to 18 percent. For 2016, HealthyCT and the state — after some back and forth — settled on a 7 percent premium hike for customers.

Paul Lombardo is an actuary for the state. He says that bouncing around is an indicator that setting premiums under the Affordable Care Act is still a bit of a gamble. That’s in part because there’s still no good data. So few people signed up with HealthyCT in the beginning that they didn’t have enough information to help set 2016 premiums.

“There wasn’t a lot of data to say, OK, we can use 2014 experience to project forward,” Lombardo says.

For now, at least, Lombardo says HealthyCT is holding its own.

“They’re in good standing,” he says. “The premium we think that we’re setting for 2016 — albeit a little bit higher than they wanted it to be on the revision — is appropriate.”

Enrollment for health insurance in the co-ops runs through Jan. 31 with just 11 of the original 23 co-ops still in business.

This story is part of a reporting partnership with NPR, Colorado Public Radio, WNPR and Kaiser Health News.

A Tale Of Two Obamacare Co-Op Insurers: One Standing, One Falling