Many millennials have their hands full as they launch into adulthood — jobs, homes and partners. But Ford Inbody, 33, already thinks about a time when he won’t be able to work. He has Parkinson’s disease.

Every night after work, he and his wife, Cortney, walk their two dogs through their Overland Park, Kan., neighborhood. For now, going out for an evening’s stroll is easy. But many of their evening conversations revolve around a time they know is coming — when these walks will prove difficult.

Inbody was diagnosed with young-onset Parkinson’s disease three years ago. When he was 25, he started noticing confusing health symptoms like joint stiffness, tremors and loss of smell. He said initially he was relieved to get a definitive diagnosis.

But, he said, “I then started doing more research about it; that’s when it became a little bit scary. There is no cure. There is no way to slow the progression of the disease. There’s nothing really except just symptom management.”

Since the diagnosis, the couple has had to dramatically rethink their future.

“We had to very much start considering life planning,” he said. “We had to make sure, you know, are we going to have enough income?”

They’re not planning to have kids and are bracing for a much more modest lifestyle than they once imagined. They live now with Ford’s grandmother, to save money for the day when the degenerative disease will eventually force him to stop working.

For now he gets health insurance through his job at a law firm, training attorneys on corporate policies. But Ford and Cortney worry about how his condition will progress and how they’ll pay for health care when he can no longer work.

Cortney works in the human resources department for a chocolatier. It is possible Ford could go on her insurance, but when they first ran the numbers, that was prohibitively expensive. So they thought Ford would get private insurance at a reasonable price despite his condition on the Affordable Care Act exchange; then he’d probably transition to Medicaid when his condition gets bad enough. That’s been his plan. 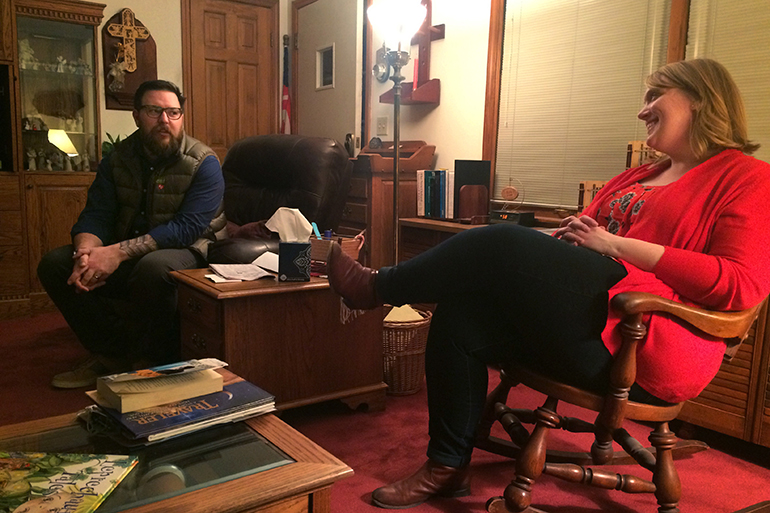 Ford, now 33, was diagnosed with young-onset Parkinson’s disease three years ago. He and Cortney savor his relatively good health today. But the disease is degenerative, which means they’ll likely need an individual health policy one day soon and will eventually turn to Medicaid. (Alex Smith/KCUR)

But ever since the election, he’s been preoccupied with the developments of repeal and replace.

It’s a constant concern, he said — “reading the news every day, checking out all the different stories that are going on.”

Inbody read every word of the original GOP replacement plan, released March 6. He was somewhat relieved to see that, at least so far, it includes the requirement that insurance companies cover preexisting conditions in every plan on the exchange.

“It’s not like a complete ‘all is lost’ situation,” he said. “And I certainly am not jumping from the roof and concerned that Republicans are trying to doom me to a life of no care.”

But he does have questions about how the overhaul of the health law will play out, in terms of his situation. Chris Sloan, a senior manager with the research and consulting firm Avalere Health, said it’s true Inbody would be able to get some sort of insurance policy, regardless. But there’s a big difference between how the new tax credits he’d get under the GOP plan would compare with the ACA subsidies to help pay for insurance costs.

“The changes to the tax credits and to the subsidies available could mean that he’s going to have to pay more,” Sloan said. “Depending on his finances, some of those changes could mean that he has to pay a lot more to get coverage on the individual market.”

Today, the annual ACA subsidies are based on income and the cost of coverage in each region. Under the GOP proposal, Inbody and his wife would, instead, get a flat $5,000 per year to help pay for health insurance coverage for them both. So when Inbody stops working and the couple’s income is much lower, they won’t get extra help in the GOP plan to pay for monthly health insurance premiums.

That’s not all. Sloan explains that, under the GOP plan, some extra help for out-of-pocket costs will disappear.

“With this new proposal, that just doesn’t exist anymore,” he said.

Sloan said there’s also nothing in the new plan to stop another problem — many exchange policies cover fewer medications than employer-based plans, and the networks of doctors and hospitals are getting narrower.

The bill also proposes drastic changes to Medicaid. Inbody could very well end up on Medicaid — it’s the insurance many people with disabilities rely on.

The Republican plan would limit how much money states get for each Medicaid recipient. And though that amount would go up each year, the increase would be based on overall inflation, not the increase in medical costs. So eventually, Sloan said, the federal government would be giving states a lot less money, relative to the cost of health care.

“Then the state has to make a decision. In Kansas’ case, they’ll have to say, ‘How do we make up that difference?'” Sloan said. “They can say, ‘You know what, we’re just going to reduce eligibility. Previously, we gave Medicaid to people up to this income. Now we’re going to take that — a little bit — because we need the money. So we’ll save money by not covering these people.'”

For example, consider Inbody’s case. Restricting eligibility for Medicaid, under the GOP plan, could mean it will be harder for Inbody to get that coverage, Sloan said. Then, “even if he gets Medicaid down the line, how generous are the benefits? Do they cover everything that he needs for his Parkinson’s condition?”

Inbody has hope that whatever legislation is ultimately passed will help him and others with their health problems. But the politics frustrates him.

“The Republicans, they want it their way,” Inbody said. “And the Democrats are going to do everything they can to refuse a Republican victory. And really, what that means in the end is something completely ineffectual that doesn’t really help anybody is going to get passed — and nobody’s really going to be happy about it.”

For now, Inbody said, he’s enjoying the health he has. He and Cortney headed out last weekend on a Colorado road trip.