“Imagine a world without Medicare.” That’s the rallying cry of a new grassroots campaign launched today by the giant seniors group AARP that will include town hall meetings in 50 states and national television ads. 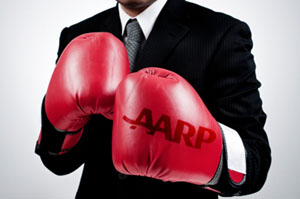 Against a backdrop of proposals to overhaul the popular social insurance program and a presidential campaign likely to address entitlement spending, AARP kicked off “probably the biggest outreach effort we’ve ever done on any issue” to activate its 37 million members, said Nancy LeaMond, AARP’s executive vice president.

The group gathered seniors at town hall meetings today in four cities – Richmond, Va.; Columbus, Ohio; Denver, Colo.; and Miami, Fla. – to start a conversation about the program’s future entitled, “You’ve Earned A Say.”  It also released a survey showing that less than half of adults ages 18 to 49 are confident Medicare will be there when they’re ready to retire.

About 200 seniors who showed up at the Richmond event expressed wariness about proposed changes to the program. When asked what message they wanted to send to Washington, several shouted, “Leave it alone,” and “Fix it or find yourself a new job.”  One added, “I know they want to reduce the deficit, but they need to find another way than on the backs of seniors.”

Some attendees also said they were disappointed that AARP officials offered little detail about their own position, or those of particular politicians. “I expected there to be more answers than questions,” said Pat Rollins, 62, a retired teacher who lives with her 70-year-old husband in a Richmond suburb. “I was thinking I would learn more here.”

AARP CEO Barry Rand promised the group this was just the first step, and the organization would be educating members about various proposals. In coming weeks, AARP will hold town hall meetings in every state, and also conduct large-scale forums by phone.

Groups on the other side of the political spectrum are also galvanizing. This week, a conservative seniors group called the 60 Plus Association put out television ads that targeted five Democratic senators and asked supporters to press them about their support for the Medicare provisions in the 2010 federal health law.

In an important election year, leaders in both parties have acknowledged that government spending on Medicare is unsustainable, even as polls show that seniors and those nearing retirement dislike most cost-cutting ideas.

Until very recently, the idea that it might be politically feasible to overhaul Medicare seemed unrealistic. Now, fundamentally changing the program to reduce federal spending seems almost inevitable.

Both houses of Congress are unlikely to consider legislation to overhaul Medicare until a new Congress – and possibly a new president – are seated in 2013. But Congress is expected to return to Washington after the election to consider major deficit reduction legislation. If lawmakers fail to reach agreement, automatic spending decreases will take effect starting in 2013, and Medicare spending would be cut by 2 percent – all from payments to hospitals and other care providers.

AARP officials say they aren’t yet taking positions on specific proposals. But its campaign website is loaded with messages likely to energize seniors as a potential voting block. “Imagine a world in which you could be routinely denied health insurance because of your age or a preexisting medical condition, a world where most seniors would be one medical event away from bankruptcy,” says one appeal.

Last year, AARP hammered Republican attempts to overhaul Medicare to reduce the budget deficit, and the timing of the current campaign coincides with the unveiling of the House Republican budget proposal for 2013, which is due out this week. The proposal by House Budget Committee Chairman Paul Ryan, R-Wis., will likely include a controversial premium support proposal to convert Medicare from a program that provides a guaranteed set of benefits regardless of cost, to one that gives beneficiaries a set amount of money to buy coverage from a private health plan. It is also expected to include the promise to preserve traditional Medicare for those who want it — a provision that was not part of last year’s plan.

AARP supported the Democrats’ health law, which reduced the growth of government spending on Medicare by $500 billion through reductions in payments to some medical providers and private health plans – mostly HMOs and PPOs – in the Medicare Advantage program.

Other senior lobby groups that work closely with the AARP are also mobilizing—and at least one is expressing unqualified opposition to any premium support model for Medicare.

“Regardless of which version Chairman Ryan includes in his budget resolution, what it amounts to is a fixed amount of money,” said Dan Adcock, director of government relations and policy for the National Committee to Preserve Social Security and Medicare, which has 3.5 million members. “If you want the kind of health care you had in the past – the same level of coverage – you have to pay more. If you can’t pay more, you have to settle for less.”

The Virginia-based 60 Plus Association, meanwhile, backed the premium support model put forth by Ryan last year, saying it would preserve Medicare for future generations.