It’s not just states where abortion is heating up as an issue this election year. Congress is getting back into the fray, too. 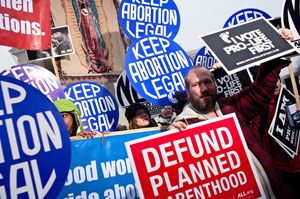 Dueling abortion signs are displayed outside the Supreme Court in early 2012 in Washington, DC (Photo by Brendan Hoffman/Getty Images).

On Wednesday, the House Judiciary Committee approved, on a party-line vote of 18-14, a bill that would ban abortions in the District of Columbia after 20 weeks of pregnancy. Congress frequently exerts control over the city and its governance, much to the chagrin of the district’s elected officials and residents.

The law is one of several of a similar type that have passed in multiple states. They challenge the premise of the Supreme Court’s holdings about the legality of abortion by attempting to restrict the procedure prior to viability with no or only very limited exceptions for the pregnant woman’s health status, on the contested medical theory that the fetus can feel pain at a certain point in gestation.

Until recently, abortion rights groups had not challenged the bans, possibly fearing that they would lose at the Supreme Court. The makeup of the court has become more conservative since the last time the justices considered a major abortion case. But that changed last week, when the American Civil Liberties Union and the Center for Reproductive Rights, along with a group of abortion providers, sued to block Arizona’s new law, which is set to take effect next month.

Arizona’s law would ban abortions more than 20 weeks after a woman’s last menstrual period, which is approximately 18 weeks after fertilization. That is far earlier than most of the other laws and would be too soon, say doctors who are part of the lawsuit, to allow the detection of some serious fetal deformities.

Meanwhile, Congress, or at least the GOP-controlled House of Representatives, is taking on abortion restrictions in other vehicles. The annual spending bill for the Department of Health and Human Services, which is slowly making its way to the floor, includes a raft of abortion-related provisions. They include complete defunding of the federal family planning program, a separate ban on federal funding for Planned Parenthood until it pledges to stop using non-federal funds to pay for abortions, and a ban on using funds to implement rules requiring most health plans to provide birth control coverage.

Then on Wednesday, U.S. District Judge James Boasberg in Washington ruled against North Carolina’s Belmont Abbey College in a similar suit challenging the rule. Judge Boasberg said that while the school might be affected by the requirement, the Obama administration has pledged to seek a compromise that would allow religious organizations not to violate their beliefs while still allowing women to receive no-cost contraception.

“The government, moreover, has done nothing to suggest that it might abandon its efforts to modify the rule – indeed, it has steadily pursued that course – and it is entitled to a presumption that it acts in good faith,” Boasberg wrote.

Several other lawsuits challenging the rule, however, are still pending around the nation.

Abortion Back On The Front Burner For Congress