“Keep calm and go live.” Those were the words on the backs of the t-shirts worn by workers at a bustling state health insurance call center in Rancho Cordova, California yesterday. But if the t-shirts urged calm, the mood was ecstatic and emotional among the architects and key backers who gathered to flip the switch on the Golden State’s new insurance marketplace. 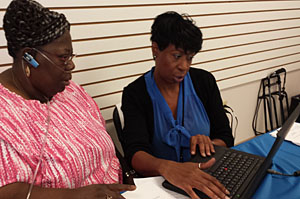 Peter Lee, executive director of Covered California, the state’s exchange, addressed a cheering crowd in this Sacramento suburb and drew a stark contrast to the grinding politics of Washington, D.C. that shuttered much of the federal government on Monday.

“While Washington is talking about shut down, we’re talking about start up,” said Lee, as he declared an end to the era of a punishing individual insurance market.

“Gone are the days of invasive questions when you apply for insurance about your allergies, your asthma, your diabetes, your cancer. Gone,” said Lee. “You’re never going to be asked that again. Gone are rates based on your answers to those questions.”

While the mood was equally buoyant at a Hampton, Virginia rally, the circumstances for people wanting insurance in the state couldn’t have been more different.  At Enrollfest, one of the few Obamacare events in the state, organizer Gaylene Kanoyton was quick to point out that “the state is not providing any resources. So, we just have to go ahead and move on. It is a grassroots effort. It is up to all of us as citizens to come together.”

Kanoyton is a mover and a shaker, and she managed to get a dozen local agencies, health centers and advocacy groups to set up tables at the Boo Williams Sportsplex in this city in southeastern Virginia. She advertised the event in churches, community centers, on the radio, and says that some 400 people came out for it.

Among them was Brenda Harrell, 57, a former hair stylist who’s lived in Hampton all her life.

“I’m here to get some insurance, some coverage,” Harrell said. “I’ve been out of work over a year, I have heart and respiratory failure, denied for Medicaid, and still don’t have any coverage. I haven’t seen a doctor for my breathing for over a year.”

She brought along her portable oxygen tank, which she needs to breathe. She has $19,000 in medical debt already and can’t afford new tubes for the tank. She’s just been using the same ones over and over.

Now she has a glimmer of hope as she sits down with a certified application counselor from a local health center to help her sign up on the federal government’s enrollment site, www.healthcare.gov.

But the site is overloaded. They try four times, but can’t do much more than enter Harrell’s name and set up a password.  And even if they could, Harrell would still probably be out of luck.  Her income is less than $10,000 a year—too much to qualify for Medicaid in a state that’s not expanding the program, and too little for a subsidy to help her buy a plan on the exchange.

It will be a different story for people in similar situations in California. The state was an eager and early adopter of the Affordable Care Act, born out of a bipartisan agreement, said Anthony Wright, executive director of Health Access, a consumer advocacy group.

“ We were the first state in the nation to set up an exchange and that was under a Republican governor,” Wright said. “Our bill to set up the pre-existing insurance program was co-sponsored by a Republican in our legislature.”

Obamacare Day One: A Tale Of Two States