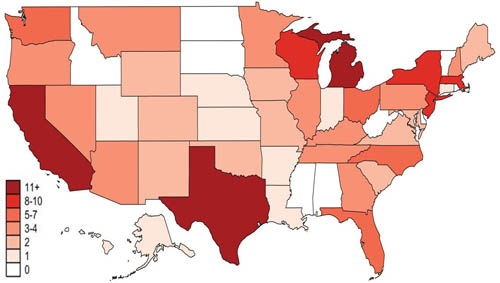 Accountable Care Organizations are the hot new health care trend, and there’s a new study out by Leavitt Partners trying to quantify just how hot they really are.

ACOs, as defined in the 2010 health law, are a delivery model that offers doctors and hospitals financial incentives to provide good quality care to Medicare beneficiaries while keeping costs down.

But that program hasn’t even launched yet, and already there are 164 “ACO entities” in the country, according to the Leavitt report. Leavitt Partners is a consultancy started by Michael Leavitt, a former governor of Utah and secretary of Health and Human Services under President George W. Bush.

To get their count of ACOs, Leavitt Partners examined news releases, media reports, trade groups and conducted interviews and considered a health system to be an ACO if it either self-identified as one or was “adopting the tenets of accountable care.”  The report included systems working with private payers rather than Medicare.

Of the 164 “ACO entities” found, 99 were sponsored by hospital systems, 38 by physician groups and 27 by insurers. They were located in 41 states, though there were vast regional differences. Poor and rural regions were found to have little ACO growth.

In the Southeast and Appalachian regions, for example, which are among the least healthy areas of the country, there are few ACOs forming. That’s a shame, says Andrew Croshaw, managing director of health practice at Leavitt Partners, because “those are the regions of the country that would benefit most from coordinated care.” Because those areas often have one dominant health system, Croshaw explains, “there is less motivation to compete and there is more traction to remain with the fee-for-service system.”

The report also noted that much of the ACO growth seems to be in reaction to competition in the marketplace: “When one institution forms an ACO, its competitors often follow suit.” In some regions, such as Boston, ACOs seem to be sprouting up like wildflowers, but in Washington DC, there isn’t much action.

While the term “ACO” may be new, the report points out that the basic tenets of accountable care have existed for years. The study authors determined that their findings suggested a trend toward “proclaiming oneself as an ACO with only modest changes to the care process” and not a total redesign.

They conclude that, at least for now, “defining oneself as an ACO represents an acceptance of the direction the industry has been headed rather than an adoption of a truly new form of care delivery.”

Updated at 9:40 a.m. on Dec. 2 to correct an error in Michael Leavitt’s work history.

ACOs Are Bursting Out All Over