Few aspects of the Affordable Care Act are more critical to its success than affordability, but in recent weeks experts have predicted costs for some health plans could soar next year.

Now health law supporters are pushing back, noting close ties between the actuaries making the forecasts and an insurance industry that has been complaining about taxes and other factors it says will lead to rate shock for consumers. 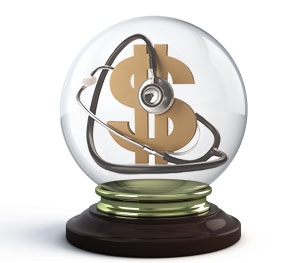 “Most actuaries in this country — what percentage are employed by insurance companies?” Sen. Al Franken, a Minnesota Democrat, asked an actuary last week at a hearing of the Committee on Health, Education, Labor and Pensions.

The committee was discussing a study published last month by the Society of Actuaries (SOA) predicting that, thanks to sicker patients joining the coverage pool, medical claims per member will rise 32 percent in the individual plans expected to dominate the ACA exchanges next year. In some states costs will rise as much as 80 percent, the report said.

The witness was unable to answer Franken’s question, but the senator made his point. Insurance is why actuaries exist. The industry and the profession are hard to separate.

Using predictive math, actuaries try to make sure insurers of all kinds don’t run out of money to pay claims. Many actuaries also work for consultants whose clients include insurance companies.

Undisclosed in the SOA report was the fact that about half the people who oversaw it work for the health insurance industry that is warning about rate shock. The chairman of society committee supervising the project was Kenny Kan, chief actuary at Maryland-based CareFirst BlueCross BlueShield.

Others on the committee work for firms with insurer clients. The report included committee members’ names but not their affiliations.

The SOA “portray themselves as this nonpartisan think tank when in fact everything about the study is by people who have a vested interest in the outcome of the study,” said Birny Birnbaum, executive director of the Center for Economic Justice, a Texas group that advocates on behalf of financial and utility consumers.

Society spokeswoman Kim McKeown said the project was overseen by credentialed actuaries “from a cross-section of industry organizations” and was “exposed for review and comment to the broad health care actuarial community.”

Even supporters of the health act worry about premium increases next year, when many of its provisions take effect. But the debate fits into a larger discussion about actuaries’ public role. Actuaries are self-regulated, which some say makes them unaccountable.

Their associations set conduct standards and investigate malpractice in confidential proceedings. During the previous two decades the Actuarial Board for Counseling and Discipline, which works with the Society of Actuaries, has recommended public disciplinary measures for fewer than two people a year, according to its annual report.

Yet actuaries play many public roles. By calculating the adequacy of employer pension contributions they affect the retirement of millions. And they’ll act as virtual referees for important aspects of implementing the health act.

“I have a great deal of respect for actuaries,” said Timothy Jost, a law professor at Washington and Lee University and health law expert. “But I do think they often end up in … situations where the interests of the public and of their employers might be in conflict.”

While the Obama administration has developed a calculator plans must use for determining whether insurance plans meet the health act’s standards for benefits and value, recently finalized regulations give insurer-employed actuaries the power to override it by substituting one benefit for another.

Insurance company actuaries calculate rates when plans file with states, which act as the industry’s primary regulators. Charged with making sure the prices are justified, state insurance departments often have far less actuarial expertise at their disposal than the insurers.

The Vermont Department of Financial regulation “does not have actuaries on staff,” a spokeswoman said. “We outsource our review of rate filings.”

The situation in 2011 was the same in a dozen other states, according to information compiled by the National Association of Insurance Commissioners.

Health-act supporters complained that that the actuary society’s study predicting a 32 percent increase in claims didn’t account for key factors, including the potential for competition to lower prices, the subsidies people will receive to buy the coverage and the fact that next year’s plans will be more generous than this year’s.

Often actuaries’ predictions are not significantly better than, say, those of the Weather Channel. Recent premium increases of 50 percent and higher for nursing home insurance reflect a previous under-calculation of costs by actuaries. Actuarial models didn’t work especially well at calculating subprime mortgage risk a few years ago, either.

A settlement in New York last month revealed cases in which actuaries overestimated liabilities and a mortgage insurer paid out as little as 20 percent of collected premiums in claims.

Jost and Birnbaum want representatives of consumers and state insurance departments to be included on the actuaries’ discipline board. In proceedings at the insurance commissioners’ group, consumer advocates also want the board to state that actuaries’ first duty is to the public whenever they furnish calculations to state or federal regulators and to tighten conflict-of-interest standards for firms producing work relied on by both insurers and regulators.

“There is always room for improvement in everything,” said Karen Terry, an actuary for State Farm and the vice president of professionalism at the American Academy of Actuaries, an umbrella group that works with the discipline board and groups such as the SOA that represent professional subspecialties such as health or pension actuaries. “We’re open to that dialogue.”

Health Insurance Actuaries In the Hot Seat On ‘Rate Shock’