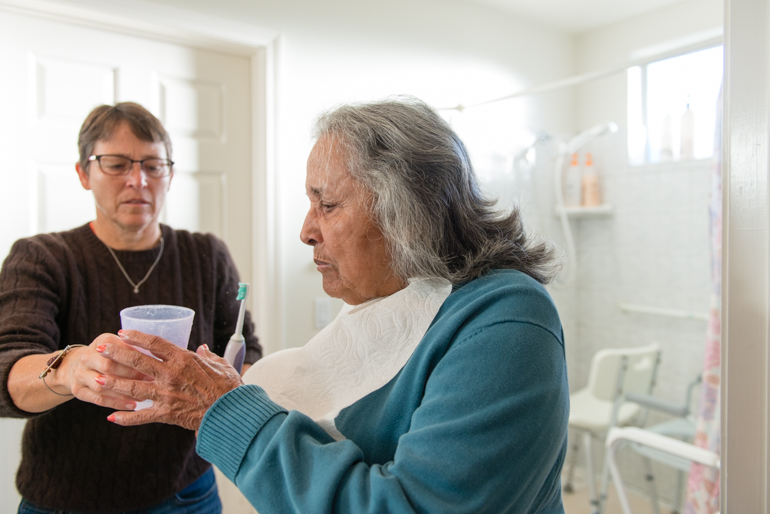 LOS ANGELES – Ada Anderson tried to prepare her 80-year-old mother for her dental visit. She gave her medication to quell her anxiety, and they rehearsed opening her mouth wide.

But at the dental clinic, Violeta Anderson refused to cooperate. Ada Anderson tried calming her mother by singing and rubbing her leg. Then she tried bribing her with crackers.

“It’s important,” Ada Anderson told her mother, who has dementia. “We have to know what’s happening with your teeth so you don’t hurt.”

In the end, dentistry professor Roseann Mulligan and her students at the University of Southern California dental school were able to get one X-ray during the two-hour visit. They couldn’t do a clinical exam. Mulligan, who specializes in geriatric care, suggested that Anderson be partially sedated next time.

Good dental hygiene is important to overall health, and chronic illnesses and medications can worsen oral health. Yet providing dental care to seniors such as Violeta Anderson is fraught with challenges. According to the American Dental Association, a fifth of people age 75 and older haven’t seen a dentist in the past five years.

Many older patients are resistant because of fear or years of neglect – or they have impaired cognitive skills and don’t understand the need. Others are not mobile enough to get to a dental office.

“There are layers upon layers that can make it very difficult,” said Susan Hyde, division chair of oral epidemiology and dental public health at University of California at San Francisco School of Dentistry.

Older patients also may have arthritis or a history of strokes. “They can’t take care of their own teeth and are prone to tooth decay and subject to pain,” Hyde said. “It becomes very complicated.”

Even for patients eager for care, paying for it can be a problem.

Medicare, which covers medical care for people 65 and older, doesn’t include routine dental care, and many seniors lose coverage through other insurance plans when they retire. Medicaid, the insurance program for low-income Americans, doesn’t require states to provide it to adults. Only 15 states offer a comprehensive dental benefit to Medicaid recipients, according to the nonprofit Center for Health Care Strategies. California recently reinstated fuller dental services for adults, and Virginia and DC offer limited dental services. 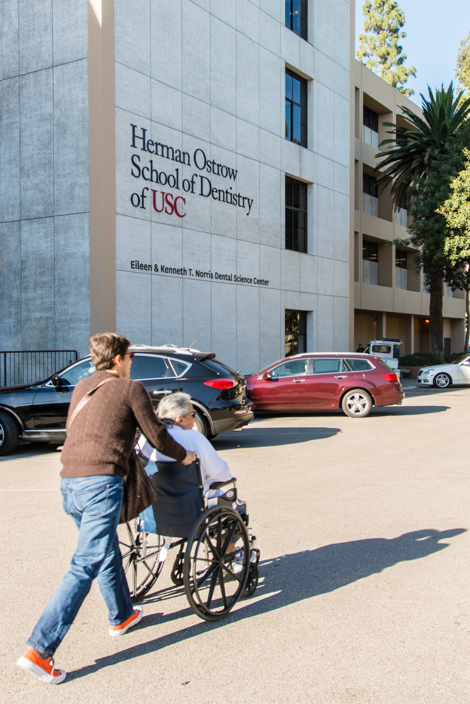 Ada Anderson wheels her mother Violeta Anderson to her dental appointment at the Herman Ostrow School of Dentistry of USC on Nov. 6, 2015. (Heidi de Marco/KHN)

Nursing homes are required to do a dental screening and help residents with oral hygiene, but dentists say that doesn’t always happen.

“You have people who have maintained their oral health their entire lives, only to see it go down the tubes in six to eight months,” said Judith Jones, a professor at Boston University’s dental school and elder-care spokeswoman for the American Dental Association.

Poor oral hygiene and care can lead to infection, the inability to eat and a loss of dignity, Jones said. And the bacteria that cause gum disease can increase the risk of coronary heart disease, aneurysms and other health problems, research shows.

Some efforts are underway to ensure that all elderly patients get access to high-quality dental care, though dentists say it won’t be easy. The Senate has proposed including oral-health screenings in its re-authorization of the Older Americans Act, which helps pay for nutrition and social services for low-income seniors. This spring two bills were introduced in Congress that would expand coverage to adults without dental insurance.

One, introduced in February by Sen. Bernie Sanders, the Vermont Democrat running for president, would extend dental coverage to all Medicare and Medicaid recipients, increase funding for oral health services at health clinics and create an oral health professional student loan program. The other, introduced in January by Rep. Robin Kelly (D, Illinois), would allow organizations to get federal grants to improve oral health education and expand outreach programs to under-served communities, including the elderly and disabled.

Mulligan, the USC professor, said coverage for dental care is just as necessary as it is for it is for medical care. But Violeta Anderson, who has diabetes and high blood pressure, doesn’t have dental insurance. She gets treatment because she is lucky enough to have a daughter who can pay for it.

The Center for Oral Health, a California-based nonprofit, is conducting a two-year assessment in California to determine the extent of dental problems among seniors. Preliminary results show that 38 percent of residents of California’s long-term-care facilities don’t have any of their original teeth. Nearly half of those with at least one tooth had untreated decay. And about 1 in 7 needed urgent care.

“The system is not currently equipped to deal with this huge wave of individuals,” said Theresa Anselmo, who is overseeing the assessment for the nonprofit. “How do you keep these folks healthy as they age, given it becomes a luxury to afford even basic dental care?”

Nazanin Sharifi, a Los Angeles area dentist who is in the program, said she wanted to specialize after caring for her father, who had Alzheimer’s. “I saw how he suffered,” she said. “He didn’t know how to brush his teethor even say he was in pain.”

In San Francisco, all dental students at the University of the Pacific’s dental school spend time at On Lok Lifeways, an organization that serves elderly people who would otherwise need nursing home
care.

One morning in October, Elisa Chavez, a professor at the school, supervised two students as they treated patients. Chavez said that until they do a rotation in geriatric dental care, many of her students haven’t thought about the specific challenges. “When you have patients who have lots of medical issues, it can be intimidating,” she said.

The patients who visited the On Lok Lifeways dental clinic that day all had some form of dementia. They spoke three different languages – Korean, Tagalog and Cantonese. All had missing teeth and health problems, including diabetes, a history of strokes, high blood pressure and kidney disease.

One 95-year-old patient had to be told several different ways to close his mouth so the team could take X-rays. Another, 82, had bone loss and signs of an infection but refused X-rays and a cleaning.

It’s a similar story at the University of the Pacific dental school. Paul Subar, a professor there, said some elderly patients may need to come five or six times before dentists can do a procedure.

But the patience can pay off. Just ask Anthony Vanderhorst. After nearly a year of care, Vanderhorst, with a history of liver disease, a stroke and deteriorating teeth, recently walked out sporting a new set a dentures.

The 64-year old, who doesn’t have dental insurance, told Subar that he was happy to look normal and play the trumpet again. And he was grateful for treatment he otherwise could not afford.

“The school was my only alternative,” Vanderhorst said, “or else I wouldn’t have any teeth in my mouth.”

Add This To Challenges Of Old Age: Keeping Your Teeth