In the scramble to come up with a deficit-reduction deal by Thanksgiving, members of Capitol Hill’s super committee appear to have one group squarely in their cross hairs: high-income Medicare beneficiaries. 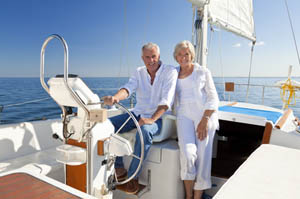 Some fiscal conservatives argue that the federal government shouldn’t help finance health care benefits for the rich. “Frankly, if you’re a wealthy person the taxpayers should not subsidize your [Medicare],” said Robert Moffit, senior fellow at the Heritage Foundation. “You’re retired. You own your own home…. You’re making $165,000 a year. No, faced with a $37 trillion unfunded liability in Medicare, the answer is no, we’re not going to pay for you.”

See more on the eight major deficit reduction proposals put forth in 2010 and 2011 that call for higher-income Medicare beneficiaries to pay more for their coverage.

But some seniors’ advocates see attempts to pry more from upper-income seniors as risky today, and a threat to the middle class tomorrow. “When you’re talking about seniors, the definition of wealthy seems to be a whole lot lower than when you’re talking about younger people,” said Maria Freese, director of government relations and policy at the National Committee to Preserve Social Security and Medicare. “Just because they’re retired, it doesn’t mean their expenses are much lower.”

About 5 percent of seniors fall into the higher-premium group now. President Barack Obama wants the share of beneficiaries paying more for their coverage to grow over time to one quarter of all beneficiaries. If that were the case today, people with incomes as low as $40,000 a year would be paying higher Medicare premiums, according to Tricia Neuman, senior vice president of the Kaiser Family Foundation. (KHN is an editorially independent program of the foundation.)

Under Obama’s proposal, more people will fall into the higher-paying category over time because the trigger levels wouldn’t be adjusted for inflation until that one-quarter target is reached. While the threshold would still be $85,000 for an individual, that would buy a lot less in the future than it does today, and tomorrow’s seniors would likely have higher nominal incomes than today’s retirees when they first go onto the Medicare rolls.

Obama’s proposal also would boost the premiums paid by everyone in the higher-income group by 15 percent, with no one paying more than 90 percent of the cost of their coverage. The White House estimates that Obama’s proposal would save approximately $20 billion over 10 years.

Other proposals by various commissions or lawmakers would lower the income threshold or make higher-income beneficiaries pay a higher share of their coverage costs.

Super committee members appear ready to ask high-income seniors to kick in more, perhaps bolstered by favorable public opinion. In a Bloomberg News National Poll conducted in June, 67 percent of respondents said they backed the idea of “wealthy Americans” paying more, although Bloomberg did not define “wealthy” when it asked the question.

Income-relating Medicare is something that both sides could settle on, said James Capretta, a fellow at the Ethics and Public Policy Center, a conservative think tank.  “It’s a way of reducing costs on the entitlement side of programs, and it’s done in a way that doesn’t hurt middle-and low-income seniors. It only hurts higher-income people. There’s very little policy opposition to it. Why be against it?”

Republicans on the Senate Finance Committee have urged the super committee to consider it, and Pelosi said in an October 28 CNBC interview: “There may be some seniors, wealthier seniors on Medicare, who can pay more. I have said no cuts in benefits, but I haven’t said no cuts in programs.”

Democrats have warmed to the idea because they don’t want to cut benefits for more typical Medicare beneficiaries, which includes seniors and disabled younger people, said Robert Blendon, professor of health policy and political analysis at the Harvard School of Public Health. “I think they are so worried about cutting benefits for the mainstream people, in their mind it’s much more important to have the upper-income pay more to keep the program going as it is than it is to start cutting benefits and having more and more people feel that Medicare is not adequate for them.”

For decades after it was created in 1965, Medicare cost the same for everyone, regardless of income. Only in 2007 did the government start collecting extra premiums from wealthier beneficiaries. The 2010 health law extended this income relating to Medicare Part D, which covers prescription drugs, effective in January 2011.

The new health law also froze through 2019 the income thresholds that determine which seniors must pay the additional costs, meaning inflation will gradually push more seniors into this group.

Freese said that her group’s biggest concern about asking high-income seniors to pay even more for their coverage is fairness: They already gave at the office.

Unlike Social Security, there is no cap on the annual income that is subject to the Medicare portion of payroll taxes paid by working Americans. The more they earn, the more they pay.

Affluent Seniors Could Take A Hit On Medicare