LOS ANGELES — More times than she can count, Dr. Carin van Zyl has heard terminally ill patients beg to die. They tell her they can’t handle the pain, that the nausea is unbearable and the anxiety overwhelming.

If she were in the same situation, she too would want life-ending medication, even though she doubts she would ever take it. “I would want an escape hatch,” she said.

This fall, California law became the fifth — and largest — state to allow physicians to prescribe lethal medications to certain patients who ask for it.

Yet van Zyl can’t see herself as one of those doctors.

“This is my life’s work, to relieve suffering,” said van Zyl, head of palliative care medicine at Los Angeles County-USC Medical Center. To her, that does not mean cutting short a life.

“I can’t imagine pulling the trigger,” she said.

Weeks after California Gov. Jerry Brown signed the “end-of-life option act” into law, palliative care physicians like van Zyl are trying to come to terms with what it means for them and their terminally ill patients. 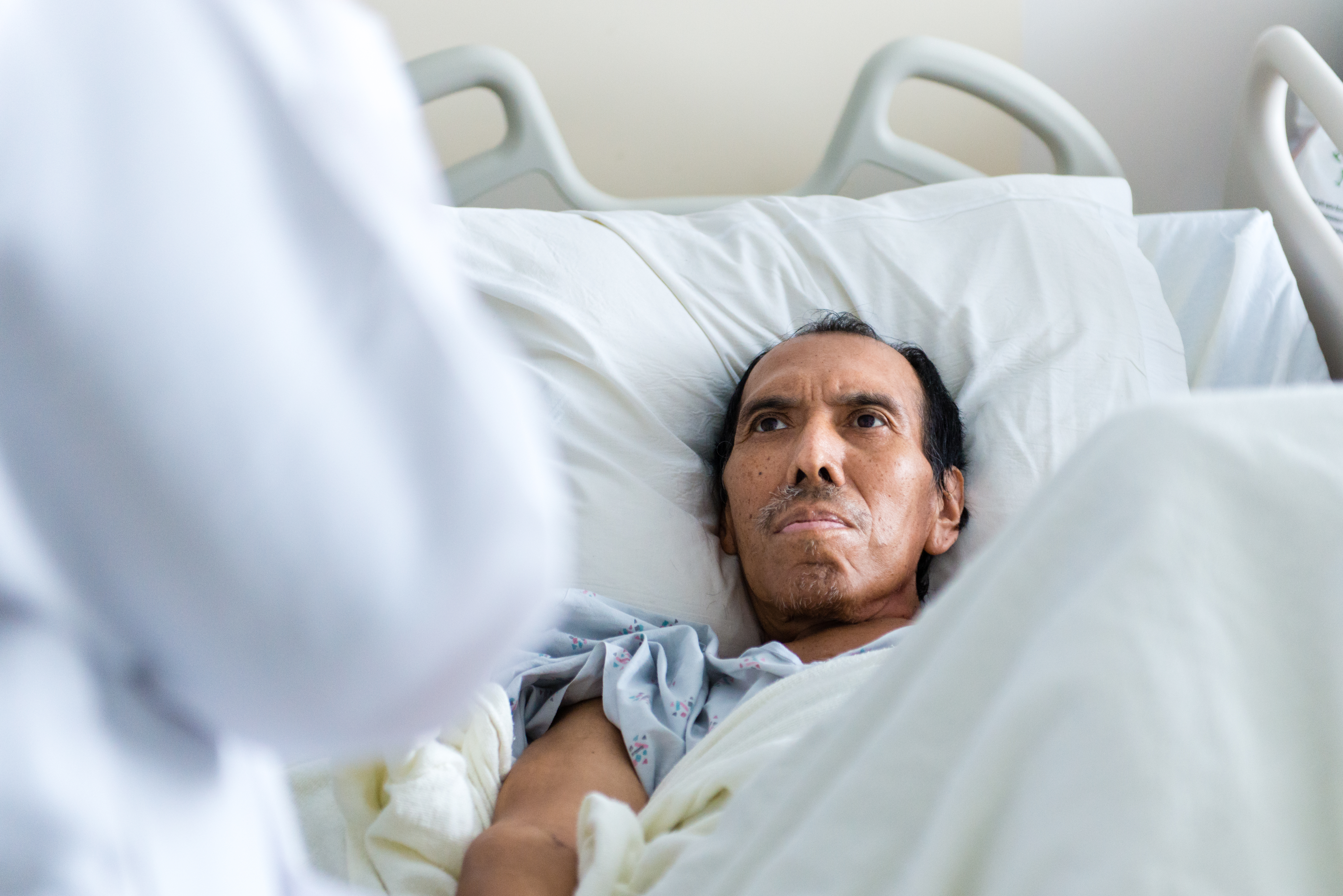 Jose Garcia Flores, 60, listens to Dr. Carin van Zyl as she explains that chemotherapy might not be an option to treat his colon cancer on Oct. 13, 2015. (Heidi de Marco/KHN)

It’s not just a question of whether they support aid-in-dying or personally would ever help end a life. Palliative care doctors say the law underscores the need to raise awareness among doctors and patients about what they do and to expand access to high-quality programs.

Contrary to some patients’ fears, they say, palliative care doctors are not there to hasten death. Their job is to help seriously ill people get relief from symptoms and stress and to improve quality of life for them and their families, regardless of how long the patients have to live.

The California law should be a “wake-up” call because it shows “how terrified patients are of what they will experience at the end of life,” said Dr. R. Sean Morrison, professor of geriatrics and palliative care medicine at Mt. Sinai’s Icahn School of Medicine in New York.

Morrison said that once patients who want to hasten their death get their symptoms controlled and their spiritual needs addressed, the overwhelming majority want to keep living.

“Their choice shouldn’t be an assisted death or living with intractable suffering,” Morrison said. “That’s what laws allowing assisted suicide, in the absence of palliative care, present as a choice to patients.”

Palliative care has become more widespread in recent years, and more doctors, nurses and social workers are being trained in how to provide it. In addition, recent legislation in California requires that Medi-Cal managed care plans ensure access to programs.

Dr. Carin van Zyl and patient Jose Garcia Flores hold hands as van Zyl promised to do everything she could to ease his pain and control his symptoms on Oct. 13, 2015. (Heidi de Marco/KHN)

But gaps remain. A recent report by the California HealthCare Foundation showed that residents in 22 of 58 California counties don’t have access to community-based palliative care, and those in 19 counties don’t have access to in-patient programs. Foundation researchers also found recently that specialists are in short supply and that there is no reliable way to pay for such care.

Dr. Ira Byock, a palliative care expert who opposed the California law, said its passage makes it more important than ever that all doctors receive more education on how to treat symptoms in seriously ill patients and talk with patients about what they want in their final months.

“As hard as illness and dying are … people still have the capacity to experience the sense of well-being,” said Byock, who heads the Providence Institute for Human Caring in Torrance, Calif.

Without palliative care programs, Byock and others say those conversations don’t always take place. Only about 17 percent of patients have had end-of-life discussions with their doctors, though about 90 percent believe doctors should be doing so, according to a recent poll by the Kaiser Family Foundation. (KHN is an editorially independent program of the foundation.) In addition, research out of the Mayo Clinic found that only 12 percent of doctors had yearly end-of-life discussions with heart failure patients, and about 30 percent of the physicians had “little confidence” doing so.

Dr. Tony Back, who is co-director of the University of Washington’s Cambia Palliative Care Center of Excellence, said that after a similar aid-in-dying law passed in his state, more doctors realized that they “couldn’t just push it off on somebody else.”

As van Zyl struggles with her own reactions to the new law, she continues to have those tough conversations with one patient after another, every day. 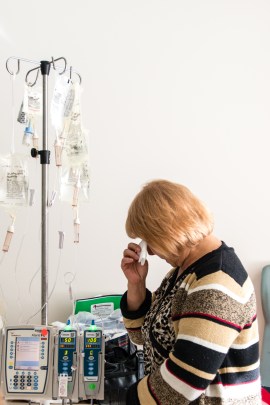 On a recent day, more than two dozen names were listed on a white board in her hospital offices — all of them patients referred to her team for care. A 33-year-old woman with metastatic breast cancer. A 50-year-old with pancreatic cancer that had spread to her lungs. A 20-year-old man with a fast-growing brain tumor.

One patient van Zyl visited that day was Jose Garcia Flores, a gaunt, 60-year-old with advanced stage colon cancer. The former electrician had been diagnosed in the spring and was back in the hospital because of pain and nausea.

Van Zyl told him that there was a possibility that doctors would no longer be able to continue chemotherapy because of a complication. Van Zyl asked what he valued more — living longer, no matter what that looked like, or not living as long but being able to spend quality time with family at home.

“There is no right answer,” she said, promising to do everything she could to ease his pain and control his symptoms, regardless of whether he wanted to continue treatment for his cancer.

Garcia Flores paused and looked over at his wife standing next to the hospital bed. “I would prefer… to enjoy time with my family,” he said in Spanish.

Van Zyl said that none of her patients have asked yet about the aid-in-dying law, which takes effect next year. She wonders if many of them even know about it.

A native of South Africa who used to work in emergency medicine, van Zyl said she recognizes that her views on the new law are hypocritical. “I don’t have a logical answer why I would want it for myself but not want to offer it to my patients,” she said. “I don’t know why I am still sitting on this fence that is increasingly pointy and uncomfortable.”

Part of it, she believes, is simple: “I’m deeply afraid of dying.” 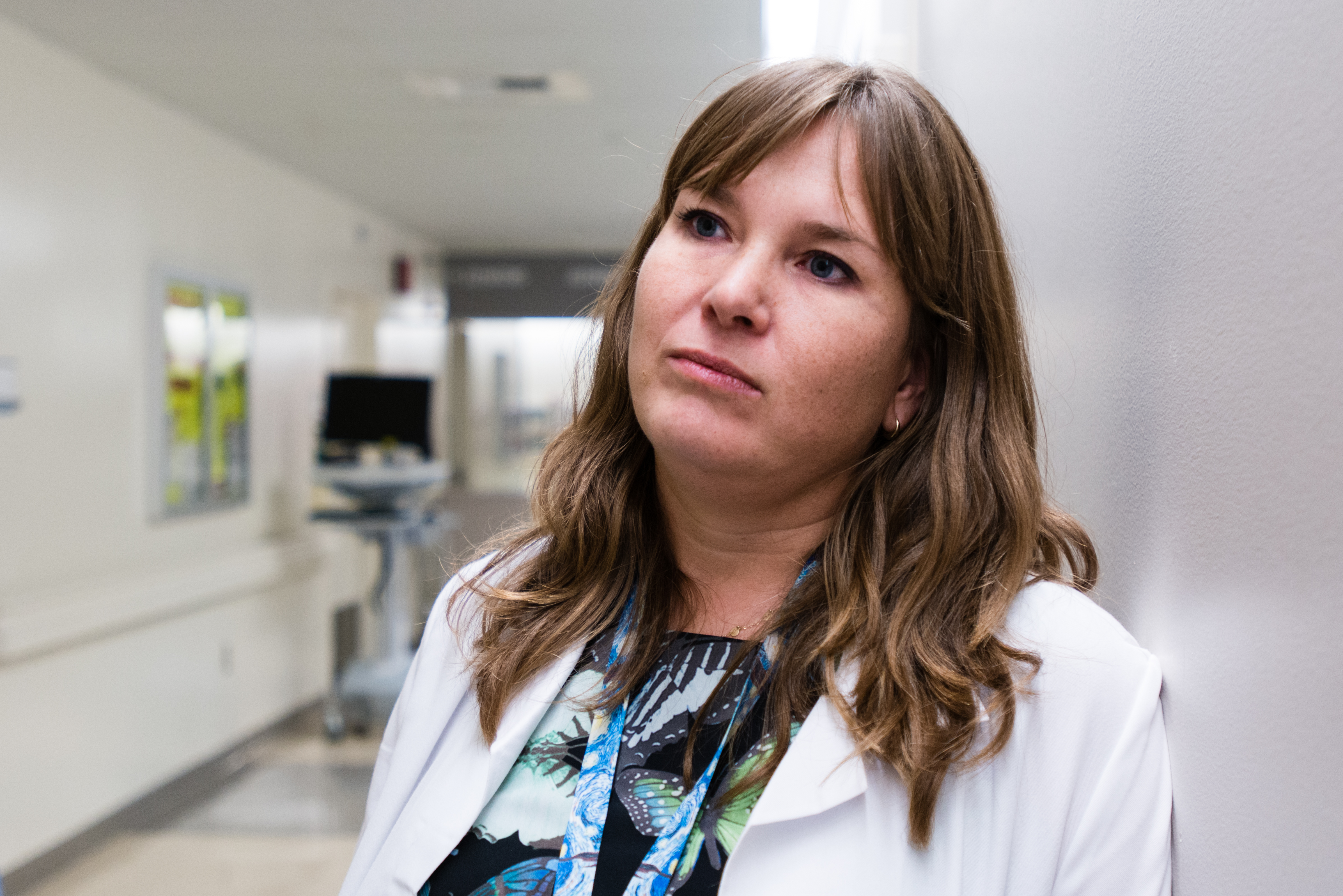 Yet she knows, as a doctor, that death doesn’t have to be scary. Some problems, she says, have medical solutions — there are effective medications for pain and anxiety, for instance, so people can die peacefully. Van Zyl says her patients have always stopped asking to have their lives shortened once their symptoms were controlled.

Van Zyl believes medical providers, regardless of specialty, can be taught how to provide palliative care. That’s part of her job. And on this day, she stood before half a dozen medical residents, reviewing the best treatments for nausea, pain and shortness of breath. But suffering isn’t always physical, she said. Patients and families also need help coping with emotional suffering, she said.

“It is possible to screw up a family for life with a bad conversation,” she said. Van Zyl urged the residents not to run away from direct and honest — though hard — discussions.  “Don’t do what so many doctors do, which is crumble.”

Then van Zyl brought up the aid-in-dying law. “What will you do when your patients says, ‘Can you kill me?’” she asked the group. “Somebody, at some point, is going to ask you to do that.”

One resident said that for her, prescribing lethal medication would be on a case-by-case basis. She would want to make sure the patient’s symptoms and pain were under control first. Another said she worried about how her own family would view her decision to help patients end their lives.

A third, Roshel Graham, said that no matter what, she hoped the law will help raise awareness about the benefits of palliative care. “I don’t think a lot of people even know palliative care exists,” she said.

As time goes on and doctors in California begin prescribing medicine to help people hasten their deaths, van Zyl said, perhaps her own views will become less conflicted.

“Maybe my position will evolve,” she said. “I could imagine one bad death tipping me over.”