Skip to content
This story also ran on The Dallas Morning News. This story can be republished for free (details).

TYLER, Texas — In the heart of northeast Texas, Tyler’s rolling landscape is dotted with churches and historical homes, and the city is known for its roses and flowering gardens. But the community also is shadowed by a grim statistic, one that leaders are striving to better understand and address.

Smith County, which encompasses Tyler and is home to more than 225,000 residents, has the highest suicide rate among the state’s 25 most populous counties.

Another report, also conducted by UT System researchers, found that the suicide rate for the broader 35-county region of northeast Texas was 43 percent higher than it was statewide in 2014. 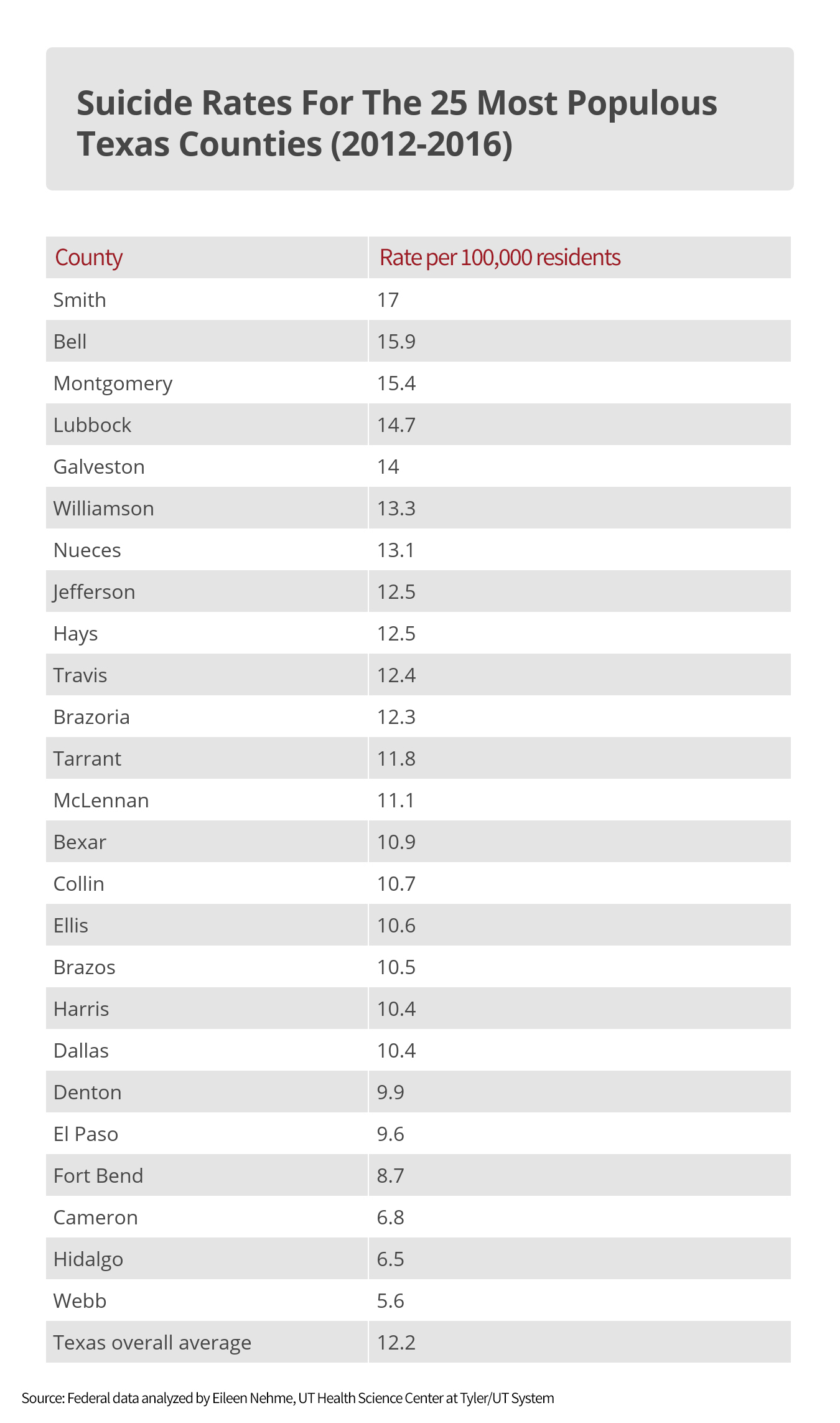 Local and state leaders pose various theories for the region’s greater vulnerability. It suffers from a shortage of mental health services and a higher use of opioids than in some other parts of the state. It also has a larger percentage of non-Hispanic white residents than statewide, a demographic whose suicide rates are significantly higher, and an engrained mix of religious beliefs, individualism and a fierce sense of privacy that can inhibit some from seeking treatment for depression and other stressors.

“I think the stigma is so great here,” said Valerie Holcomb, a Tyler licensed professional counselor. “There is sort of a pull-yourself-up-by-your-bootstraps mentality.”

But in the past several years, local efforts to tackle suicide rates have begun to ramp up, according to Holcomb and others.

The UT Health Science Center at Tyler, which provides medical services as well as training for new doctors, didn’t have a psychiatric unit until 2013. With the help of state funds, it has added psychiatric beds and a residency program for psychiatrists. The Smith County Sheriff’s Office now employs two officers trained on mental health issues who frequently respond in an unmarked car without flashing lights or sirens and try to get people in crisis to psychiatric help without arrests or using handcuffs.

Perhaps most significant is the formation of the Smith County Behavioral Health Leadership Team, chartered in 2015, which convenes meetings with dozens of local mental health leaders at least every other month to discuss treatment gaps and solutions.

They describe a fresh openness to discussing the underpinnings of suicide — inextricably tied to mental health and substance abuse issues — and a heightened effort to improve services and maximize those the community already has.

Smith County’s higher suicide rate may be shaped in part by demographics, as the rate statewide runs three times higher in whites than for Hispanics or blacks, said Molly Lopez, a clinical psychologist and the principal investigator for the Zero Suicide in Texas project, a federally funded initiative to seed local prevention efforts. In Smith County, 60 percent of residents are non-Hispanic white compared with 43 percent statewide, according to U.S. Census Bureau data.

Opioid use also might contribute to some suicides, said Andy Keller, president of the Meadows Mental Health Policy Institute. The Texas-based nonprofit research organization recently completed a report on substance abuse within the state that showed Smith and some nearby counties had experienced above-average rates of opioid-related deaths.

Opioid addiction, Keller said, both erodes one’s ability to build a happy and productive life and “lowers your inhibitions, so you’re more likely to act on your impulses.”

Dawn Franks, the project coordinator for the county behavioral health leadership team, credits local attorney Doug McSwane and his wife, Mary Mozelle “Mo” McSwane, with providing much of the local momentum, following their son’s suicide in 2012.

Since then, other local professionals have shared their own stories, pulling suicide out of the shadows, Franks said. “It just suddenly was a time when people could begin to actually talk about it and not be ashamed of it,” she said.

Shortly after Patrick McSwane’s sophomore year at Texas Tech University, Doug McSwane fielded an unsettling phone call. His 20-year-old son wanted to know why his dad had joined the Mafia and had permitted a chip to be implanted in Patrick’s head.

For nine years of highs and lows, Doug and his wife sought medical opinions in Texas and elsewhere to help Patrick shed the hallucinations and delusions of schizophrenia.

“Patrick was a warrior,” Doug McSwane said. “He fought his disease with everything within him. And we lost.” 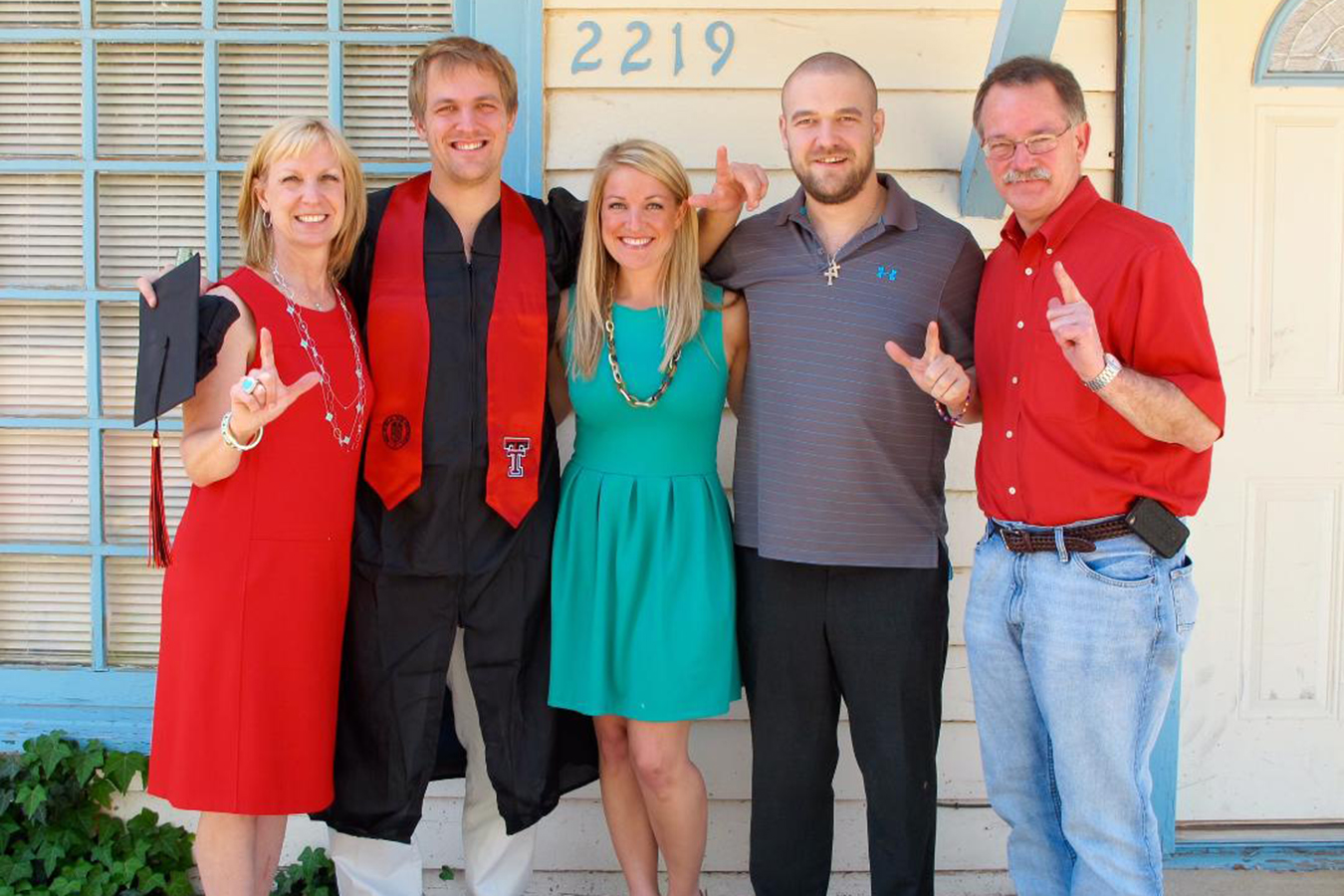 Patrick McSwane (second from right), with his parents, Doug and Mary Mozelle “Mo” McSwane, his sister, Marcie, and brother, Ryan, in May 2012, several months before he died. The family was celebrating Ryan’s graduation from Texas Tech University in Lubbock. (Credit: Janet Romine)

One of the toughest aspects, as the couple recently described it sitting in the living room of their Tyler home, was the acute sense of isolation. Mo McSwane tried to share her incessant worries about Patrick with friends but didn’t make much headway. Religious beliefs and the stigma of mental illness, which she acknowledged is now starting to change, can frame perceptions, she said.

“We’re in the Bible Belt here,” she said. “I think that sometimes people in churches think you can pray something away. You wouldn’t say that to somebody who was a diabetic.”

The first time Patrick threatened to kill himself, in 2004, Doug McSwane called the police, who took Patrick away in handcuffs. McSwane was later forced to testify that his son needed to be involuntarily committed for his own safety.

“I think it’s the hardest thing I’ve ever done,” he said, choking up.

After that, by and large, Patrick stayed on his medication, his parents said. He finished college at the University of Texas at Tyler and got partway through a master’s degree in psychology there.

But sometime in the final year of his life, he took his medication more sporadically.

Patrick was sitting in one of the family’s cars on a country road outside Tyler, wearing his favorite cross, when he took his life. “The policeman told us that he had his Christian music blaring as loud as he could get,” his mother said. Music had always eased Patrick’s symptoms.

“We don’t know how he got the gun,” Doug McSwane said. “I had taken all of the guns out of the house.”

Grieving and wanting to shed more light on mental health needs, Doug McSwane launched the first Peace of Mind Tyler conference in 2014. He also co-chairs the behavioral health leadership team, which gathered in late March over sandwiches in the basement of an Episcopal church. 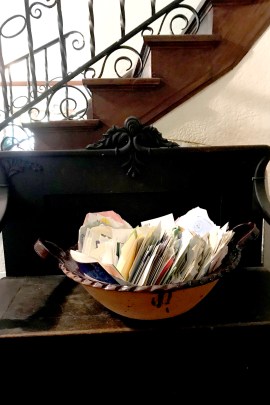 In the front hall of the McSwanes’ home sits a bowl full of letters the couple received after the suicide of their son Patrick, who battled schizophrenia. (Charlotte Huff for KHN)

They heard an update on a long-term goal, to raise more than $2 million to build a 48-hour psychiatric unit to assist with immediate diagnosis and stabilization, easing the strain on local hospitals. A local pastor described an upcoming event for church leaders, focused on mental health challenges faced by veterans.

Tyler — the largest city in a nearly 200-mile stretch from Dallas to Shreveport, La. — serves as a medical hub for this largely rural region of the state. During the meeting, Matthews described how the UT Health Science Center in Tyler now has 44 state-funded psychiatric beds on-site and a staff of eight psychiatrists and four psychologists.

It’s still a struggle to meet mental health needs in Smith and nearby counties, Matthews said later. “We have a waiting list to get in to our patient services even with” the new resources.

For their part, the McSwanes now try not to reflect too much on the “what ifs”: if only there had been a mental-health-trained officer, or more psychiatric beds closer to home or less of the stigma that isolated Patrick and the family.

But their silence ended from pretty much the moment that Patrick died at age 29.

His siblings, Marcie and Ryan, wrote about his struggles with mental illness on Facebook. Doug McSwane spoke frankly at Patrick’s funeral. They were flooded with phone calls and visits and casseroles.

In the front hallway of their home, a large bowl sits prominently stuffed with the cards and the notes they received. “I keep it out, just as a representative of the love,” Mo McSwane said.