This story is part of a reporting partnership that includes APRN,

Frances Lynch is used to the active life of a bedside nurse. But lately, she spends half of her shifts at a simple office desk stacked with six computer monitors. The familiar squiggles of a heart beat roll across one screen. 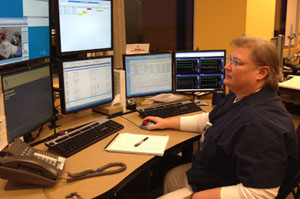 “If they were to have an abnormal rhythm we could see it right away and alert the bedside nurse,” Lynch explains, as she examines one patient’s data.

Lynch is at the heart of Providence hospital’s electronic intensive care unit. In Alaska, where it can be hundreds of miles to a hospital with an intensive care unit, the Anchorage hospital is trying to electronically bridge the gap.  The eICU allows staff in Anchorage to help treat patients at three other hospitals in remote locations, while also adding an extra layer of care for patients in the Anchorage ICU.

So Lynch functions as an extra set of eyes for the bedside nurse. She is constantly monitoring the patients’ breathing rate, blood pressure and oxygen level. She can see the patients too, with a camera that allows her to zoom in or out and pan around the room.

“I was watching somebody,” Lynch says. “She’s behind the curtain right now, but I’m just keeping an eye on her for the bedside nurse, who’s afraid she might try to leave.”

The picture is sharp enough for Lynch to see pupil responses or assess the tubes that keep many ICU patients alive. She could monitor as many as 33 patients from this one station. But on a typical day, Lynch is watching about two dozen.

“You take some 21st century technology and apply some expertise behind it and you can provide additional support for the patients and the staff working at the bedside,” Ruesch says.

During the day, the eICU nurse is alone at the station. But for 10 hours each night, a doctor works there too. That’s important because in the past, ICU nurses would have to call a sleeping doctor to ask a question or request an order. Ruesch says nurses were reluctant to do that. Now problems that crop up can be dealt with right away.

“Now, because we have the physician who’s awake, there’s not that ‘I’m going to wait just a little bit to call the physician.’ They’re calling and getting the order right away,” Ruesch explains.

Providence started the electronic ICU three years ago. In 2010, they began using the system to monitor beds at remote hospitals. It costs Providence $2 million a year to operate the system and the rural hospitals pay about $40,000 dollars a year to hook each bed up to the system.

Providence’s hospital in Kodiak was the first to come on board, with two beds. Bonnie Neff is the patient care nurse manager in Kodiak. She praises the extra support the eICU provdes.

“It’s awesome,” says Neff. “[For] anybody that lives in a rural community, having the eICU is a huge asset.”

The Kodiak hospital only uses the eICU about six times a month on average, Neff says. But during those times, it’s extremely valuable. She describes a typical scenario.

“They’re on our floor, we’re stabilizing them, [and then] the weather turns bad,” says Neff. “We can’t get them to Anchorage because nobody’s flying.”

Neff says the eICU staff provides guidance on tricky — and often lifesaving — procedures. Since the system first started a year and a half ago, she estimates the eICU has prevented about 17 patients from being transported to Anchorage. She says a typical medevac costs $20,000. And for the patients, the benefits are just as huge, says eICU clinical manager Ruesch.

“That’s 17 patients got to stay with their families, got to stay in their own community. And what a benefit that is for them,” Ruesch notes.

Critics of the eICU say the concept costs a lot of money and hasn’t yet proven it can improve patient care. But a 2011 study in the Journal of the American Medical Association found eICUs prevent deaths by helping doctors follow best clinical practices. The study also showed eICUs cut two days off the average length of an ICU stay.

According to Ruesch, the Providence eICU is sending patients home close to a day early.

Besides Kodiak, the Anchorage eICU is now monitoring patients at Bartlett Regional Hospital in Juneau. A Providence hospital on the Oregon coast called Seaside also joined the system because bad weather can leave critically ill patients stranded there.  Providence is hoping more rural hospitals will follow.