Skip to content
This story is part of a reporting partnership that includes Alaska Public Radio Network,

Dr. Michael Cooper cringes when he thinks about the time he was a family practice doctor working in Kotzebue, Alaska. 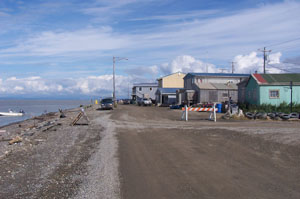 Kotzebue, Alaska, is a remote arctic community of some 3,000 people. Alaska public health official Dr. Michael Cooper says that when he worked here three years ago, he occasionally saw patients with classic symptoms of tuberculosis — but he failed to make the connection (Photo by J. Stephen Conn via Flickr).

Three years ago, he worked in this remote arctic community, which is home to 3,000 people, mostly Inupiat Eskimos. Cooper occasionally saw patients complaining of a persistent cough. They may also have been experiencing night sweats or weight loss — classic signs of tuberculosis. But, he says, “TB was rarely on my list of diagnoses when I would see a patient. I hate to admit that. And as I look back now, I go through these patients some nights and I think, that patient could have had TB, and why didn’t I at least do this? Why wasn’t I even aware of it?”

Last July, Cooper came to Anchorage for a position with Alaska’s Health Department. His new job: to lower the state’s high rate of tuberculosis — in 2011, the highest rate in the United States.

Cooper is learning from his mistakes. He’s focusing part of his efforts on educating other doctors and nurses in Alaska about tuberculosis. That starts with explaining why the TB rate is so high.

Listen to the story on NPR.org.

“We experienced probably the highest rates of TB back in the early 20th century found anywhere in the world at the time,” he says. Many Alaska Natives were living in crowded conditions that allowed TB to spread easily.

“Imagine a nice cold winter and a packed house full of people. And one person having picked up this brand new disease that they have no immunity against. And then spreading it. It just can spread like wildfire.”

Until 1950, TB was the No. 1 cause of death in Alaska. That legacy means that a large number of Alaskans still carry the bacteria that can cause the disease. They have no symptoms, and they aren’t contagious, but full-blown TB can flare up at anytime and then spread.

One of the nurses Cooper works with is Karen Martinek. She’s part of a team that responds quickly when a new case pops up.

“If we see a small, isolated village — usually, they are accessible only by air or snow machine in the winter — and we have a case or two of active tuberculosis identified in that village, we can be quite confident that there’s transmission going on,” she says.

The treatment for active TB is a long course of powerful drugs. For people with inactive TB, there is a new, relatively short regimen of drugs that is much less complicated and eliminates TB. Cooper hopes that will encourage more people with latent disease to complete the treatment, which would eventually help bring down the high rate of active TB in Alaska. Until then, Cooper worries about the potential for epidemics in the state.

Cooper and others are also worried about strains of TB that are resistant to many of the available drugs. But so far, so-called multidrug-resistant TB is not widespread here. And the overall rate of TB in Alaska over the past 20 years has been on a slow decline.

Cooper hopes he can keep that trend going. With a sheepish smile, he says that will involve making sure more doctors in Alaska think about the possibility of TB when each new patient walks through their clinic door.

This story is part of a project with the Alaska Public Radio Network, NPR and Kaiser Health News.