Gunnar Ebbesson is used to paying a lot for health insurance, but the small business owner from Fairbanks got a shock recently when his quote came in for next year’s coverage.

The premium for his family of five came to more than $40,000 a year. That’s for a bare bones plan with a $10,000 deductible that he buys through the marketplace set up by the Affordable Care Act.

Customers can begin buying plans on HealthCare.gov starting on Nov. 1 and do so through Jan. 31, 2016.  Rates for individual health plans went up an average of 7.5 percent nationally. Within that not-too-alarming average are outliers. Some states saw their average rate go down; others saw a big percentage leap from a reasonable starting price. For instance, Boise, Idaho, saw a 30 percent spike in premiums from about $210 to $273 a month.

But Alaska is a special case.  It has the highest premiums in the country, and it has seen some of the highest percentage increases over the past two years. That makes paying for insurance especially difficult for families like the Ebbessons.

Ebbesson doesn’t qualify for a subsidy to help pay for insurance because his family income is more than $142,000 a year. But, he says, his insurance costs more than his mortgage.

“I’m not able to put money in retirement, savings for my kid for college, my ten year old. Believe me I could find lots of stuff to do for my future with $40,000,”  he says.

Ebbesson supports the Affordable Care Act. He calls the Alaska rates a wrinkle in the law that needs to be fixed.

The average 2016 premium for a 40-year-old in Anchorage is $719 a month – more than double the national average, according to an analysis by the Kaiser Family Foundation. (KHN is an editorially independent program of the foundation.)

Most Alaskans, and most Americans, qualify for a subsidy that rises with premium increases – insulating consumers from big jumps. But about 5,000 Alaskans pay full sticker price.

“We want people to have access to affordable coverage and that’s not happening right now in the marketplace in Alaska,” says Eric Earling, a spokesman with insurer Premera Alaska.

Premera is one of only two companies selling on Alaska’s exchange. Earling says even with the high prices, the company is losing millions of dollars on Alaska’s tiny individual market.  In the first six months of this year, 37 Premera customers filed over $11 million in claims, Earling says.

“The important thing is they deserve access to coverage, and we’re glad they have it,” he says. “The trick is creating a sustainable environment where those costs can be absorbed in a way that doesn’t adversely impact all consumers.”

Premera is backing legislation to use Alaska’s high risk pool, which will allow the biggest claims to be paid by a special fund. 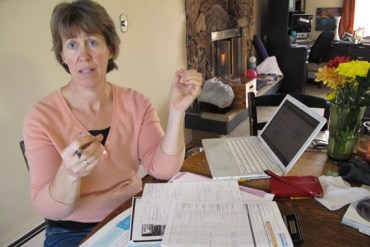 Victoria Cronquist shops for lower cost health insurance at her Anchorage home. She may drop coverage. (Photo by Annie Feidt/APRN)

The state’s Division of Insurance hasn’t taken a position on the idea.

Victoria Cronquist is a dental hygienist in Anchorage. She doesn’t care what the solution is, as long as it helps her find more affordable insurance.

“It’s just getting too expensive,” she says. “I’m up against the wall. I can’t do it all.”

This year, she pays $1,600 a month for herself, her husband and two kids, ages 16 and 20. She gets a stipend from her work to help pay that premium, but her rate is going up to $2,600 a month next year. And her stipend isn’t going up. Cronquist says she may cancel her insurance.

“To be quite frank, to have a $2,600 monthly premium payment and all this is stressful to me. Extremely. And that increases my odds of getting ill! That’s the other way I look at it,” she says.

Cronquist doesn’t take the decision lightly. Her family has dropped health coverage in the past. And they paid the price when her daughter ended up in the ICU a few months later.

Ebbesson also has a difficult decision ahead.  He’s thinking about dropping his policy and saving money instead. Ebbesson says his family could fly to Thailand for any big medical procedures that were necessary. If something catastrophic happened though, it would put his family in a tough position.

“It’s a scary proposition. There’s always bankruptcy but, my goodness, why should I be having to even think about things like that related to my health insurance?” he says.

The high rates will push more Alaskans into a category that allows them to avoid paying the penalty for going uninsured. The law includes an “unaffordability” exemption if the lowest cost insurance amounts to more than eight percent of income.

This story is part of a reporting partnership with NPR, Alaska Public Media and Kaiser Health News.