One in 32 African American women in the United States is likely to be diagnosed with HIV in her lifetime. 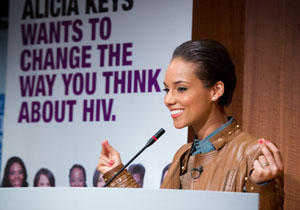 “One in 32, think about that,” said singer-songwriter Alicia Keys, citing the Centers for Disease Control and Prevention statistic at an event Monday. “Thirty years after we first heard of AIDS, it is really a tragedy that anybody is being infected.”

But people are being infected with the virus in the U.S. and, as Keys said, black women are affected disproportionately. Keys stammered a little as she read the word “disproportionately” from her notes, and then recovered and repeated it with force saying, “It’s a big word and it’s a bad thing. That’s not acceptable.”

Keys’ comments came at the kickoff of the EMPOWERED campaign, an effort to increase awareness of HIV and AIDS among women, a new part of the Greater Than AIDS public information push by the Kaiser Family Foundation. (Kaiser Health News is an editorially independent part of the foundation.)

The CDC statistics on women in general and black women in particular are sobering.

One of the main themes of the campaign – which includes videos, public service ads, and social media efforts — is to make the issue personal for women. A video shows Keys interviewing five women living with HIV. “They are just like you and just like me,” Keys says in the video of the women, who all sat in the front row of the foundation’s conference center during Monday’s kickoff.

Valerie Jarrett, senior advisor to President Barack Obama, and chairwoman of the White House Council on Women & Girls, also spoke at the event, making the point that the issue of women and AIDS has long been a personal one for her.

“Every day I carry around the heartbreak of losing my sister-in-law, who died nearly 20 years ago,” Jarrett said. “She went months without being diagnosed because nobody thought to test a married woman at the time.”

Jarrett pointed out that, under the Affordable Care Act, HIV testing is now covered as a preventive service without cost sharing, and beginning in 2014, people with HIV cannot be denied insurance because of a pre-existing condition.