Call it a wonky version of “American Idol” — or, perhaps more aptly, “Research for a Cause.” Four Georgetown University Medical Center scientists recently delivered 15-minute sales pitches about their work, hoping to win money from an unusual panel of judges: local residents who are not experts on science.

The first scientist showed cartoonlike drawings to explain how osteoporosis occurs. The second aired a video of a kidney transplant. The third projected a CT-scan image of the brain of a U.S. soldier severely injured in Iraq. The fourth displayed a photo of a tumor-ridden liver, a picture so graphic that she warned her audience that some might want to avert their eyes.

To become a judge, each individual agreed to donate at least $1,000 to the medical center. In return, the donor received a chance to review a handful of proposals by Georgetown researchers and vote for a top choice. The two projects garnering the most support each got a grant of $35,000. Donors also receive periodic progress reports on the studies and a tour of the labs. 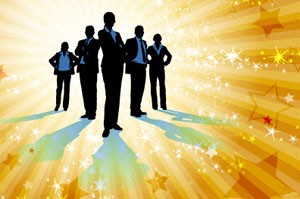 The program, called Partners in Research, was launched by Georgetown in 2011 as part of an effort to develop new ways to finance biomedical research.

“Without a great track record or good preliminary data, it’s increasingly hard to win funding” from the National Institutes of Health or private foundations, says Vivien Marion, a senior director in the medical center’s office of advancement. In fact, the odds of winning an NIH grant have been steadily decreasing; in the past two years, less than 20 percent of applications have received funding, down from 30 percent 10 years ago as NIH’s budget for research grants has been flat while the number of applications has increased.

Partners in Research was designed to provide just enough funds to innovative projects to generate data that could “put researchers on a path to win more money” from other sources, says Marion, who runs the program and has contributed $1,000 to it each year.

This year’s winners were a project that explores new strategies to prevent osteoporosis and one that examines whether a drug used to treat hypertension and diabetes can reduce damage caused by traumatic brain injuries. The runners-up: a proposal to evaluate a new technology that might help doctors determine if donor kidneys are healthy enough for a transplantation and a study to find new molecules in the lab that could block a protein associated with cancerous tumor growth.

“You feel bad that you can’t support them all,” said Bette Kramer, who hosted a wine-and-cheese party to recruit donors.

“I give to a lot of different causes,” said Kramer, a retired District resident. “But this is personally gratifying because it’s an exciting way to participate in what’s going on in science and medicine today. I view this like venture capital, as an opportunity to provide funds for scientists looking for a breakthrough.”

The partners program reflects a growing trend of raising funds through “crowdsourcing,” in which individuals pool multiple small donations for greater impact. Internet sites such as Kickstarter, for example, have raised money from a large number of participants to fund projects proposed by various start-ups and researchers. Other Web sites, including GiveForward.com, GoFundMe.com and YouCaring.com, have allowed patients to solicit money to help underwrite their medical costs.
For people who prefer personal contact with fellow donors, there are giving circles, where individuals meet to select charities to receive their pooled donations.

Partners in Research grew out of a Georgetown promotional campaign designed to generate donations. In 2009, the university launched Doctors Speak Out, a community education program that hosts discussions of health issues. At these quarterly luncheons, university scientists detail how their research touched on these issues.

Donations were not required, but they were not discouraged, either. Many attendees would make contributions, often designating the funds for two research on one of the topics discussed. “The money was so diluted, it didn’t make enough of a difference,” Marion says. Trying to create a bigger impact, she thought of the growing popularity of giving circles and hoped a similar concept could work for Georgetown’s biomedical research projects.

For researchers, it’s a competitive process just to win a spot on the presentation platform, with each proposal undergoing a peer review by other Georgetown researchers. The first year, a dozen projects were reviewed and five finalists selected. Last year, there were nine applications and four finalists. This year, 34 applications were winnowed down to a final four that went before the judges.

Still, the process is easier than seeking other funds. “There’s less red tape, and if you’ve got a new, innovative idea but no pilot data to support it, this program gives you an opportunity to start building data to support outside funding in the future,” said Adam E. Green, an assistant professor of psychology whose team won one of the first year’s awards, for research into Alzheimer’s disease. Now his group is writing applications for outside funding. “I’m not sure how else we would have gotten to this point,” he said.

Mark Burns is one of this year’s winners, for his work on brain trauma. “This first step is an important one that will allow us to test our principal hypothesis and enable us to generate the exhaustive preliminary data that is required to secure a large research grant,” said Burns, an assistant professor of neuroscience.

Similarly, the grant enables scientists to follow their research into areas not initially expected. Rebecca Riggins, an assistant oncology professor, said she was able to expand her study of a promising breast cancer drug when tests showed it was also effective at killing brain tumor cells. Without the Partners in Research  grant last year, Riggins said, “I’m not sure we would have been able to pursue the brain tumor research; all that work would have been an orphan.”

None of the researchers has obtained outside finding yet, but they are working toward it.

Researchers acknowledge that the competition before the judges might turn into a popularity contest, with those that have the most dynamic and/or sympathetic presentation winning the funds. But, Robert Clarke, dean for research at the medical center, said, “It really doesn’t matter. It’s all good science, so not a penny will be wasted.”

The winners cite an additional benefit: personal engagement with the donors. Says Nady Golestaneh, director of research in the ophthalmology department, says, “The money is very useful, nice, but the personal donor support makes us even more motivated in our research.”