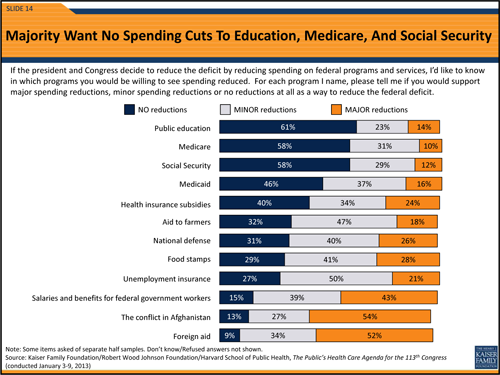 Most Americans want quick action to reduce the deficit, but almost six in 10 oppose cutting Medicare spending to achieve that goal, according to a new poll released today.

Lawmakers should examine other alternatives, including requiring drug makers to give the government “a better deal” on medications for low-income seniors (85 percent) and making higher-income seniors pay more for coverage (59 percent), according to the survey conducted by the Kaiser Family Foundation, the Robert Wood Johnson Foundation and the Harvard School of Public Health. (KHN is an editorially independent program of the Kaiser Family Foundation.)

More than seven in 10 Democrats, independents and Republicans say that if the President Barack Obama and Congress made the “right changes,” they could reduce the deficit without making major cuts to Medicare.  Just over half (51 percent) oppose raising the Medicare eligibility age from 65 to 67, an idea discussed by both parties on Capitol Hill, and 85 percent oppose requiring all seniors to pay higher Medicare premiums.

Forty-six percent of those surveyed said they would not accept any reductions to Medicaid, the federal-state insurance program for the poor which has been a big target of Republican lawmakers.  Those percentages are largely unchanged from two years ago, “suggesting the past year of debate over the need to make cuts had not greatly altered the general shape of public opinion,” the survey found.

As millions of baby boomers are becoming eligible for Medicare, the president and congressional lawmakers face tough choices about whether and how to rein in spending on federal health care programs to help reduce the deficit.

In his inauguration speech, Obama said that America must make “hard choices to reduce the cost of health care and the size of our deficit,” even as he defended entitlement programs. “The commitments we make to each other — through Medicare and Medicaid and Social Security — these things do not sap our initiative. They strengthen us,” Obama said.

The survey, conducted in early January after lawmakers resolved the “fiscal cliff” standoff, found that the public wants Obama and Congress to act to reduce the deficit, rather than waiting for a stronger economic recovery.

The support for quick action comes from Republicans (74 percent), independents (71 percent) and Democrats (57 percent), as well as seniors (73 percent) and non-seniors (63 percent).

The poll also found bipartisan support for implementing some provisions of the 2010 health care law. Fifty-five percent said it was a high priority for their state to create new online health insurance marketplaces under the law, to help people buy coverage. Support for exchanges cut across party lines, with 60 percent of Democrats, 55 percent of Republicans and 49 percent of independents backing the idea.

“Governors are largely splitting along partisan lines on the exchanges, but the public is not,” Drew Altman, president and chief executive officer of the Kaiser Family Foundation, said in a statement. “People like the idea.”

The survey found that 52 percent of Americans also think their state should implement the health law’s expansion of eligibility for Medicaid, while 42 percent did not.   Support for the Medicaid expansion, expected to extend coverage to as many as 17 million people, varied by party, however, with most Republicans (66 percent) preferring to keep the program as  it is, and most Democrats (75 percent) supporting expansion.