This story is part of a partnership that includes WCPN, NPR and Kaiser Health News. It can be republished for free. (details)

The Amish countryside in central Ohio looks like it has for a hundred years. There are picturesque pastures with cows and sheep, and big red barns dot the landscape. But something changed here when, on an April afternoon, an Amish woman walked to a communal call box. She called the Knox County Health Department and told a county worker that she and a family next door had the measles. 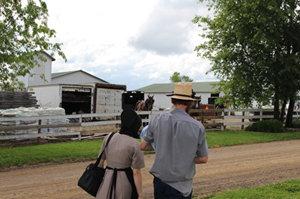 An Amish couple holding their baby walks back to their buggy after being vaccinated at the clinic in Knox County, Ohio. (Photo by Sarah Jane Tribble/WCPN)

“The very next morning we were out to collect samples, collect nasal swabs and also draw blood. And it was just textbook measles,” says Fletcher.

A nurse in Knox County for nearly three decades, Fletcher had never seen the illness, but she knew the symptoms.

“The rash,” she says. “They had the conjunctivitis in the eyes, their eyes were red. They don’t want the light. They sit in the darkened room, wear dark glasses. I mean they were just miserable, [with] high temperatures [of] 103, 104 temps. So this was the measles.”

The largest outbreak of measles in recent U.S. history is underway. Ohio has the majority of these cases – 341 confirmed and eight hospitalizations. The virus has spread quickly among the largely unvaccinated Amish communities in the center of the state. 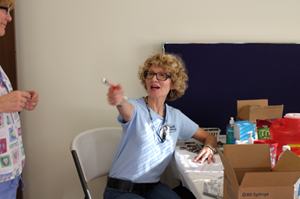 Nurse Jacqueline Fletcher runs a measles clinic in Knox County, Ohio where there’s been an outbreak of the illness. (Sarah Jane Tribble/WCPN)

The afternoon Fletcher arrived in the county, she collected samples, and a county worker drove them to the state health department and quickly confirmed the measles. The next day, Fletcher says she was on a call with the U.S. Centers for Disease Control and Prevention.

“I remember the first conversation we had with the CDC, the fellow said, ‘You have to get ahead of this.’ ”

On a Wednesday in mid-June, her clinic takes place in a store that usually sells construction supplies. A steady stream of people come through the day, but after the workday ends, Amish families form a line out the door while buggies continue to roll into a nearby parking lot.

Most of the children are barefoot, not needing to wear shoes until they work out of the home. The girls wear homemade dresses and bonnets; the boys, pressed trousers and button up shirts. Inside the clinic, most people are calm, but the younger ones tremble. 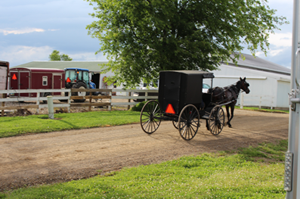 About 8,000 of the estimated 33,000 Amish people in six central Ohio counties have been vaccinated against the measles so far. The Amish eschew cars and other conveniences, but they are not universally opposed to modern medicine. (Sarah Jane Tribble/WCPN)

Ervin Kauffman reassures his six children as they squeeze into a small back office for their second MMR shot (mumps, measles and rubella) since the outbreak began. While many Amish are not against vaccines in principle, many – including Kauffman’s children – have never had shots. Many babies are born at home and do not regularly see a pediatrician. They also don’t attend public schools.

“I guess there was no scare to us before, I guess we were too relaxed,” Kauffman says. “I guess I never was a fear for it.”

Kauffman says the outbreak has changed other customs, too. Spring is the Amish wedding season, a time when hundreds come together, often traveling from other states and sometimes Canada. Those weddings were postponed. “We’re just now starting with weddings,” he says.

Church services, typically held in family homes, were also curtailed. “We didn’t have church for almost two months because of the measles, so we wouldn’t spread them, so we kind of tried to put the clamp on them,” he says.

Ohio state health department officials confirm the outbreak began in Knox County after Amish men returned from a mission trip to build houses in the Philippines.

The men at first believed they had contracted Dengue fever, which is spread by mosquitoes, Fletcher says. But as they recovered, their illness spread. And by April, Fletcher says members of the Amish community recognized the rashes and realized it was measles.

Knox County Health Commissioner Julie Miller came out to visit Fletcher’s clinic to lend support to the vaccination effort. She has no idea how many are still at risk of contracting the illness.

“It’s hard to answer that because we still don’t know what the number is of who has the potential to be sick,” she explains.

That’s because there’s simply no official count of how many Amish live in Ohio. Researchers at Ohio State University estimate about 33,000 live in the six-county area where the outbreak began.

At last count, 8,000 people in those counties have been vaccinated.

But Miller fears the measles will continue to spread because there is still resistance to vaccinations, particularly among Old Order Amish. Paul Raber is skeptical and says he believes God won’t give him more than he can handle. Still, he did decide to get the measles vaccine for him and his family. The 35-year-old father of 11 isn’t sure if he or his family will get more vaccinations. “We might, we might,” he says, sounding doubtful.

Meanwhile, the virus is spreading, with more cases being reported in nearby Holmes and Stark counties.