SACRAMENTO — In a state considered crucial to the success of Obamacare, older people have enrolled in California’s new health insurance marketplace in large numbers as expected, but younger people also have showed up in force.

About 56 percent of Californians who signed up for coverage in October are over 45 and nearly 23 percent of the enrollees are between 18 and 34 years old, according to data released Thursday at the Covered California board meeting in Sacramento. The older enrollees make up a higher percentage than in the state’s total population, while the proportion of younger consumers more or less matches their makeup statewide. 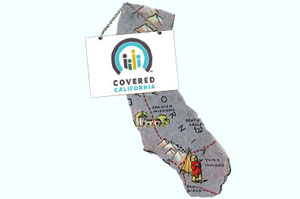 Policymakers and health officials around the nation are closely watching California, which has nearly 7 million uninsured and the highest number of people enrolled in new coverage of any state. In the first month of the law, California consumers made up about one-third of enrollees nationwide. As of Nov. 19, nearly 80,000 people had signed up. California runs its own health insurance exchange and website and is not part of the troubled federal site.

Executive Director Peter Lee said he was pleased that young people were already enrolling because that bodes well for premiums in 2015. “Our sustainability in the long term is about having a good risk mix,” he said.

Perhaps even more important than age, however, will be how healthy or unhealthy the enrollees are. Those who are sick are more motivated to sign up early because they may have imminent health needs and may have been locked out of the insurance market, researchers said. They are willing to put up with application problems, online and in person, months before they will see any actual benefit.

“There is a whole group of people who would like to get into health insurance who have been held at bay,” said Deborah Chollet, a senior fellow at Mathematica Policy Research. “It has been an unfriendly market.”

The nation’s health law does not allow insurers to reject people with preexisting conditions. The health status of the enrollees won’t become clear until insurance companies start seeing claims next year.

Jesse Crall, 23, has been uninsured since he graduated from UCLA last year. Though he is otherwise healthy, Crall has depression and attention deficit disorder. Each month, he pays $760 for therapy and $300 for medication.

He went online to sign up immediately, though he had to send additional paperwork before his application could be processed. “I want this to go into effect as soon as possible,” said Crall, who lives in Hollywood. “I need a plan that cuts these costs.”

The data released Thursday highlighted one steep challenge for California officials: It showed a poor turnout among Spanish-speaking consumers. Just 3 percent of those signed up in October spoke primarily Spanish, compared to about 29 percent in the state’s population. That is expected to increase over time, Lee said, because more than half of the enrollment counselors speak Spanish.

Advertisements for the marketplace are also running in Spanish, there is a Spanish-language version of the marketplace website and several advocacy groups are doing outreach and education in Latino communities.

But Latinos, who make up about 60 percent of the uninsured in the state, may be slower to apply because of the delay in getting enough Spanish-speaking enrollment counselors certified or because of a lack of education about the law, advocates said. Maria Lemus, executive director of Vision y Compromiso, an organization of Latino community health workers, agreed with Lee that more Latinos will enroll over time. But many of them still don’t know what options are available, and they often need one-on-one help signing up for insurance.

“We can educate and inform and get them to the door or to the website, but moving them through the system is a different process,” she said.

Marian Mulkey, who leads health reform research at the California HealthCare Foundation, said California officials should, however, be concerned. Latinos, she said, are a “pretty big part of the target population”.

Kevin Horn, a 60-year-old self-employed graphic artist in Orange County, is among the more expected sort of enrollees: an older person with health problems. Horn and others like him represent the pent-up demand in the market of people who have been shut out of buying health insurance.

He has a long list of health issues, including acid reflux, chronic fatigue syndrome, fibromyalgia and high blood pressure. He takes about 18 pills each day, and many of his prescriptions will run out in January. He has been denied coverage in the past but now pays about $500 a month for insurance through a special program for people with preexisting illnesses.

Horn, 60, went onto the website on Oct. 1 but got an error message when he tried to enroll. He spent weeks trying to sign up online and over the phone before the application finally went through this week. His new plan under Covered California will cost $74 a month – a dramatic savings.

“I am definitely eager and anxious,” he said. Horn said he can’t afford to pay his last two months of premiums and has already made medical appointments for January, when his new coverage begins.

Larry Kaplan, who lives in Los Angeles, is also looking forward to January. Kaplan, 60, signed up this month for a plan under Covered California, which will save him about $300 a month. Kaplan began paying for his own health policy after losing his job and his insurance several years ago.

Kaplan said he is overweight and has high blood pressure and high cholesterol. “I am in pretty good health, but I have the typical chronic things people my age have,” he said.

Health advocates said they plan to use the demographics data as a guidepost to see where outreach is working and where more is needed. They also urged against drawing too many conclusions from the numbers, saying that Californians still have more than four months left to sign up.

“The first inning of a baseball game rarely tells you what the final score is going to be,” said Anthony Wright, executive director of the consumer group Health Access.

It is too soon to know whether the state will have the right mix of young and old, healthy and unhealthy to make the marketplace financially viable, researchers said.

“It’s still really the early days,” Mulkey said of the California HealthCare Foundation. “There is a long time before this is all done.”