This week, I answered questions from readers who are confused about coverage under the health law.

Q. I signed up for a Health Net plan on the exchange, but I don’t like the plan’s terms, which were never explained to me. I would prefer to have insurance through Kaiser Permanente. How do I go about making that happen?

A. You may have a tough time switching plans before the next open enrollment period that begins Nov. 15. In general, people can only change plans midway through the year under limited circumstances, and not liking the plan they picked isn’t one of them. 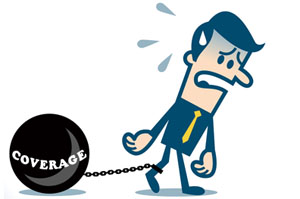 “If you picked a plan and everything was correct in the available information and you just don’t like the plan, I don’t see anything under federal law that you can do to switch” outside open enrollment, says Kevin Lucia, senior research fellow at Georgetown University’s Center on Health Insurance Reforms.

Having said that, if the information posted online about your plan was incorrect, for example, or a counselor enrolled you in the wrong plan, those kinds of problems could create a special enrollment opportunity that enables you to switch plans during the year.

If you think you may qualify for a special enrollment period, your next step should be to contact your health insurance marketplace call center for help, says a spokesperson for the Centers for Medicare and Medicaid Services.

Q. I will be retiring this year from my company, before age 65. My company is dropping retiree health care in January, stating that retirees younger than 65 can elect coverage through the exchanges. Will the company be required to offer COBRA starting in January? I fear that coverage will be expensive through the exchanges since we will not be eligible for any subsidies due to my husband’s $200,000 income. He’s self-employed and covered under my company’s health plan.

A. In general, if an employer discontinues its retiree plan, it’s not required to offer retirees the opportunity to extend their coverage for up to 18 months under the federal law known as COBRA, according to a Treasury Department official. The cancellation of your retiree plan will create a special enrollment opportunity for you to sign up for a plan on the health insurance exchanges. You won’t need the special sign-up period, however, since January is midway through the annual open enrollment period that runs from Nov. 15 through Feb. 15 when people can change plans anyway.

As you note, you won’t be eligible for subsidized coverage on the exchange because your husband’s income exceeds 400 percent of the federal poverty level ($62,920 for a couple next year). But it’s worth checking out plans on the marketplace anyway, says Laurel Lucia, a policy analyst at the Center for Labor Research and Education at the University of California, Berkeley. Depending on your health needs, a marketplace plan might be a better fit. “The typical job-based plan resembles a gold or platinum marketplace plan, but on the marketplace they’d have the option of buying silver and bronze level plans as well,” she says.

Q. I’m trying to understand the benefits that the Affordable Care Act provides to uninsured people. Under the law are local hospitals required to offer uninsured people preventive services, such as mammograms and colonoscopies, even if they don’t have the ability to pay for those services?

A. The health law requires insurers on the individual market to accept all applicants regardless of their health, and limits how much insurers can charge for coverage. For uninsured people, that’s a big improvement over the way things used to be. But while the law requires most health plans to cover recommended preventive services like cancer screenings for their plan members at no cost to them, people who don’t have insurance can’t take advantage of that. Uninsured people can get care at federally funded health centers regardless of their ability to pay. The centers provide primary and preventive care at more than 9,000 locations nationwide.

But they generally don’t have specialists on staff, making access to mammograms or colonoscopies chancy. Those screenings are available to low-income uninsured people through the Centers for Disease Control and Prevention’s National Breast and Cervical Cancer Early Detection Program, available in every state, and the Colorectal Cancer Control Program, available in half of the states. Unfortunately, these programs have historically been underfunded and serve far fewer people than are eligible, says Alissa Crispino, a spokesperson for the American Cancer Society’s Cancer Action Network.

What Happens To A Consumer Who Gets Exchange Plan Buyer’s Remorse?