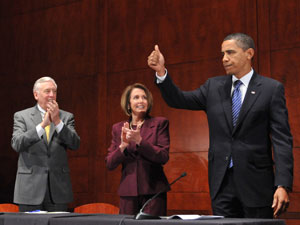 With their health bill foundering, House Democrats — including Speaker Pelosi — are turning to a narrower piece they hope has populist appeal: repealing the antitrust exemption for health and medical liability insurers. President Obama spoke to the caucus on Jan. 14. (Ron Sachs-Pool/Getty Images)

With comprehensive health care legislation foundering in Congress, the House Wednesday passed a narrower piece of legislation that lawmakers hope has widespread, populist appeal: repealing the antitrust exemption for health insurers. The measure now goes for consideration to the Senate, where it’s prospects are not clear.

Proponents say that the legislation would spur competition among insurers and bring down costs for consumers. Reps. Tom Perriello, D-Va., and Betsy Markey, D-Colo., who are sponsoring the bill, said in a press release it would “end special treatment for the insurance industry that allows them to fix prices, collude with each other, and set their own markets without fear of being investigated.”

But many antitrust experts say that ending the exemption — by repealing the 1945 McCarran-Ferguson Act — wouldn’t significantly increase competition or reduce premiums.

“This is just barking up the wrong tree for health insurance,” said Scott Harrington, a professor of health care management at the Wharton School at the University of Pennsylvania. While many lawmakers are eager to pass some kind of health care bill, they “don’t have a clue how the antitrust exemption works. It might sound good, but I can think of very few things in the bill that would be less consequential for consumers of health insurance.”

Here is a short primer on the issue:

What is the antitrust exemption?

Insurers are among a handful of industries, including Major League Baseball, that have a special exemption from federal antitrust laws.

The McCarran-Ferguson Act gives states the power to regulate the “business of insurance,” granting insurers a limited exemption from federal antitrust scrutiny. Insurers, for example, under the federal antitrust exemption may be able to meet, share information and agree on pricing for premiums, but experts say that most states prohibit that practice.

The law does not bar the federal government from regulating the insurance industry entirely; the Federal Trade Commission and the Department of Justice are responsible for antitrust enforcement involving mergers and acquisitions.

How is the antitrust exemption used?

Currently, all types of insurance have the antitrust exemption. Some lines of insurance, such as some property and casualty insurance, have historically formed organizations called rating bureaus that collect and pool claims data from different companies. This information allows insurers to more accurately predict how much they might end up paying out to customers and even set premium rates together.

But because health insurers tend to be large, and health risks tend to be fairly well-known and predictable, the health insurance industry doesn’t share premium rate information about customers, says Art Lerner, who is co-chairman of the health care practice at Crowell & Moring, a Washington law firm. Lerner used to direct the FTC’s health care antitrust program.

Harrington noted that some regions are dominated by one or two insurers but said that has little to do with the McCarran-Ferguson exemption and much to do with how federal and state officials have enforced mergers and acquisitions. (The Government Accountability Office updated an earlier report on insurance market competitiveness on Feb. 27, 2009).

Randy Stutz, a research fellow at the American Antitrust Institute, a nonprofit advocacy group that favors stricter antitrust enforcement, said it’s difficult to know whether insurers are engaging in behavior that would violate federal antitrust laws because “collusion is inherently secretive in nature,” adding, “You sort of have a Catch-22.”

He said that there isn’t evidence of illegal activity. Still, he said, federal antitrust laws have become more flexible since the enactment of McCarran-Ferguson, so the exemption for insurers is no longer needed for them to share historical data.

“The activities that McCarran was probably designed to protect are likely already allowed under the federal antitrust laws,” he said.

What would happen if the exemption were repealed?

An analysis by the Congressional Budget Office estimated that repealing the antitrust exemption for health insurers “would have no significant effects on either the federal budget or the premiums that private insurers charged for health insurance.” The CBO found that premiums might increase or decrease, “but in either case the magnitude of the effects is likely to be quite small.”

Defeating the bill is not a top priority for America’s Health Insurance Plans, the health insurance industry’s top trade association; officials said the legislation targets a problem that does not exist. But they say they are worried that any repeal could lead to an increase of lawsuits because lawyers may jump to challenge insurer practices that may be legal even without the exemption.

But J. Robert Hunter, director of insurance at the Consumer Federation of America and a former federal insurance administrator, said repealing the law could have an enormous impact on how insurers do business. He cited a recent case in New York where insurers were sharing pricing information on out-of-network procedures. “That wouldn’t happen without an antitrust exemption,” he says.

David Balto, a senior fellow at the Center for American Progress, a left-leaning think tank,  and a former policy director of the FTC’s Bureau of Competition, said it’s important for the federal government to take a more active role in regulating insurers because state regulation has been uneven. “Less than a third of states have brought consumer protection actions against insurers,” he said.

Balto added that ending the antitrust exemption is long overdue. “There’s no industry where competition is so clearly vanquished as in health insurance industry,” he said.

This is an updated version of a story that was originally published Feb. 8, 2010.

The Antitrust Exemption For Health Insurers: Meaningful Or Not?