Lawyers for the state of Texas were in federal appeals court in New Orleans Wednesday arguing in favor of a controversial state law that requires abortion clinics to meet the standards of outpatient surgery centers.

If that provision is re-instated, ten of Texas’s remaining 17 abortion clinics would close immediately. Other provisions of the law – including one that said doctors who perform abortions need admitting privileges at nearby hospitals – have shuttered about half of Texas’ 40 abortion clinics over the past two years. 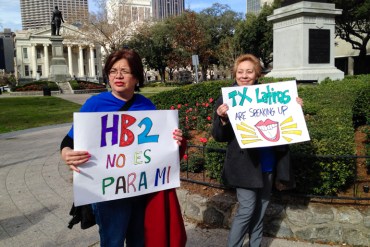 Lucy Felix, left, and Celeste Martinez of Brownsville, Texas rally outside the Fifth Circuit Court of Appeals in New Orleans. The women oppose the controversial Texas abortion, House Bill 2, which was being reviewed Wednesday at the courthouse. (Photo by Carrie Feibel/Houston Public Media)

The law, known as HB2, was famously opposed by Democratic state Senator Wendy Davis, whose pink-sneakered filibuster propelled her into the national limelight and on to an ultimately unsuccessful bid for the governor’s mansion.

In a packed courtroom Wednesday, a three-judge panel of the Fifth Circuit Court of Appeals sharply questioned both sides for about 90 minutes.

Some arguments centered on women in El Paso, where only one clinic is still open. If the law closes that clinic, women would have to drive more than 700 miles to San Antonio for an abortion.

Jonathan Mitchell, the Texas solicitor general, argued that women don’t face an “undue burden” on their right to abortion just because they may have to drive farther than before.

Judge Edward Prado pressed the point, asking: “Can you see any distance that would be an undue burden?”

Mitchell said he couldn’t give a number, because the U.S. Supreme Court itself hadn’t given much guidance to the exact definition of “undue burden.”

But Stephanie Toti, the attorney representing the clinics, later said the Texas law clearly imposed an undue burden on women in West Texas and the Rio Grande Valley: “If a woman in El Paso has to travel 500 miles to get an abortion, that’s an undue burden.” 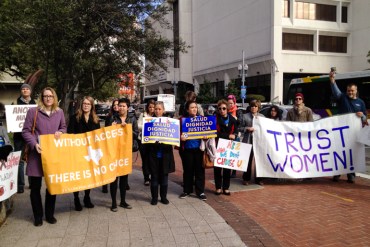 The rally in New Orleans was organized with the help of the Texas chapter of National Latina Institute for Reproductive Health (Photo by Carrie Feibel/Houston Public Media) .

Judge Catharina Haynes jumped in, noting that the El Paso scenario was hypothetical, because women there would simply cross the border to a closer clinic in New Mexico. “We know that nobody is going to drive 500 miles. They’re going to go to New Mexico. You’re asking us to ignore that,” she told Toti.

Later Haynes asked the lawyer for Texas, Mitchell, to deal with the same issue. “She [Toti] makes a good point on why is Texas fobbing off these women on another state, if these [safety] restrictions are so necessary?” She asked Mitchell if the clinics in New Mexico offered those women “substandard care” since they weren’t subject to the same rules as Texas clinics.

“We wouldn’t say it’s sub-standard care,” Mitchell said. “We would say it’s care that is less than optimal.”

Abortion rights advocates and opponents from Texas traveled to New Orleans for the hearing and to make their cases on the courthouse steps.

Amy Hagstrom Miller is the founder and CEO of Whole Woman’s Health, an organization that operated six clinics around the state. Two have already closed because of the law; if the 5th Circuit rules against her case, three more will close.

“I’m actually quite encouraged by the line of questioning,” Hagstrom Miller said after the hearing. “I feel the judges really understand the undue burden as applied to women in El Paso, and they seem genuinely concerned about those women’s access to safe abortion as protected by the constitution.”

Hagstrom Miller outlined for a reporter why regulations for ambulatory surgical centers need to be more stringent than those for clinics where abortions are performed: “Ambulatory surgical centers are specifically crafted for moderately complex day surgery, where there’s incisions, anesthesia, more than one physician in the facility.” The vast majority of abortion services are simpler than that, she said: “Patients are not asleep; they can walk to the recovery room. So the hallway widths related to patients being transported on stretchers, the operating room size related to having anesthesia and multiple physicians are completely irrelevant for the safety of abortion care.”

Emily Horne, an activist with Texas Right to Life, said that the law ensures women’s safety.

“The reason we’re opposed to abortion is it ends a life. And so we don’t want the woman that’s undergoing the abortion to be subject to that as well,” Horne said. “We don’t think that her life should be at risk, either. It’s consistent with our morals to protect the lives of women undergoing it as well as those lives lost by it.”